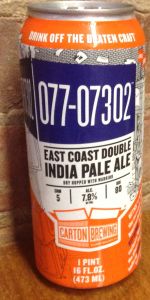 Notes: 077XX is our double IPA focused on harmonizing the extremes inherent in the nature of an American double IPA for long-term drinkability. 077-07302 is the Dubviant tuned up with an exclusive Warrior third dry hop inspired by the places that get it in Jersey City. Warrior backs up 0’dub’s mix of dank resins and tropical fruits with fills of citrus, pine, and herbs. Drink 077-07302 and jam down that dank path.
View: Beers | Place Reviews
Reviews: 13 | Ratings: 70 | Log in to view all ratings and sort
Reviews by KingforaDay:

EDIT: Had the second can, and while my review is essentially correct this time as well, it seemed a little brighter and fresher without greatly contradicting what I had typed earlier. Maybe that other one was just a little bit more tired. I've adjusted the score to reflect that. Incidentally, unlike the first can, this one has a canning date: March 24, 2016.

16oz can received as part of a Ninja Box from the madman known to BA as SammyJaxxx. No freshness date on the can, just a “22” on the bottom. If this was brewed in 1922, I suspect the Warrior hops will not be fresh. By the way, I don’t know if this is a single hop DIPA or the Warrior hops are just a special guest. There’s a blurb on the side of the can, but not much sense is made from it by me for either not being adequately schooled in all things Carton or not being from NJ, or more likely, both.

Poured into a Mad Bomber IPA glass, this beer was a hazy, golden amber color, with a big, sudsy head that was mostly gone after a few minutes but left a lot of lace behind.

Lemony, citrusy hops greet the nose. There’s a little bit of peppery spiciness in the background.

The taste is similar to the aroma. Lemony citrusy hop flavor to the fore some tropical fruits, not overly bitter

The body is somewhere between light and medium, with an oily, yet lighter, more watery mouthfeel than I expected for the style.

A restrained take on the style, a little too much so for me (perhaps I’m too used to west coast DIPAs that thrash the palate with big, resiny hops, bitter piney notes and booze, or maybe this one has a little age on it; fortunately, SammyJaxxx sent me another one, maybe it will be different if that was the case, so I’ll have to drink that very soon, for science), but very drinkable, with little sign of the relatively high abv. I would drink it again if available in my neck of the woods, but more as a change of pace from my usual rather than as a go-to.

Yet another 0'Dub variant that I traded for and finally got to this week. Excited to try this after the others that I've had but this one was just a bit underwhelming to me. It had the nice body and juicy mouthfeel that I liked but the dankness and balance wasn't here as the dry-hopped aspect of the Warrior hops was just a bit too much here to let everything else shine through.

The pour to this was good as the beer was golden, hazy, and had very small floaties suspended throughout it. Not a strong aroma to this as there was lots of melon and cantaloupe pith here, with even more in the taste. Dry-hopped, pithy, and moderately juicy, this needed a shot of water as a chaser after each sip. Too much an herbal mouthfeel as this felt like earl grey tea that had somehow gone old. Not feeling the citrus or pine here as there was more of a lemon zest feel to this. Just enough carbonation here to keep this from feeling too heavy while allowing the flavors to linger, a bit longer than I would have liked...

Once again, the alcohol was strong enough here but not to the point where it could be felt before everything else kicked in. While not a bad beer, this didn't measure up to the other variations that I've had thus far. However, it did taste fresh for being canned on 3/24 with the usual "Start @44F" written above it. Worth a go if you want to have all of these of love Carton but this wouldn't be the first 0Dub that I'd reach for if I had a choice!

Thanks to SammyJaxxx for this one. 16oz can poured into 10oz goblet. Canned on 9/29/16 (ooopsie! a bit late getting to this one). Poured a hazy medium yellow-gold color with about 1/3 inch of white head that had low-moderate retention and medium lace.

Aroma was hop forward, and had a bit of cattiness/skunk, with a nice malt background. Pretty similar on the taste side of things, earthy malts and bright hops.

Body was light medium, and fit this beer well. There was a mostly dry finish, with a slightly sweet note in the background. Drinkability was pretty good, and likely would have been great had I gotten to it in a timely manner (in my defense, he sent me a huge box, and I had BIF beers to drink, and my regular local drinking patterns to maintain, I'm only one drinker!), and would like to try it again. Overall, a pretty nice brew, one that's worth your time if yousee it, and is likely worth a bit of effort to obtain.

A) Pours a hazy bright orange-amber body with a 2 finger white head, retains well and leaves a good amount of lacing.

S) The aroma is GRASSY, dank and piney with a hemp and peppery finale.

T) The flavor follows the nose with lots of bitter pine, grass, hay, and lemon. Finishing spicy and bitter and clean.

O) COULD be the best Odub?

The aroma is dank and piney like a Phish concert. I get lots of pine and lemon, as well as a subtle peppery note on the back end.

The flavor follows the nose perfectly. Lots of bitter pine and lemon zest. Subtly spicy on the back end.

Overall a very good IPA that is dank as hell and bitter in the best way possible, not to mention extremely drinkable. Really enjoyed this beer.

From a can dated 3/24 into my savuign glass

A new Dubviant? In cans? I am so there!

Canned 3/24/16, poured into ale glass for review, though I generally drink these from the can.

T: Shooting from the halls of good taste, bang bang, it is the Warrior (hop)! Citrus as in nose, mixed with tropical, mixed with pine with resin. A tiny bit of bitterness on finish, but balanced out nicely and does not linger.

O: This is just outstanding. Regretting only buying a 4-pack, as I do not live close.