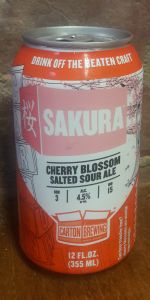 With Sakura we drag the joy of Spring’s regeneration into the languid summer doldrums. The evocation of that ethereal moment when winter is gone and the warm weather is drifting in; rebirth through age captured in the delicate aromatic waft of the cherry’s blossom. A simple salted sour lightened and dried with sushi rice in the mash; the promise of warmth ending dormant chill, brought forward to accentuate balmy summer evenings. Drink Sakura and revel in the yin-yang of captured impermanence.

Nice, this is a tasty, well balanced gose with just a mild salty undercurrent. The cherry blossom is tough to pick out, but that doesn't matter as it works well with the lactic tang.

Big thanks to @SammyJaxxx for another unique and tasty Carton offering.
Poured from a 12 oz can.
Slightly hazy peachy straw in color. White fluffy head advances and retreats, leaving some light lacing.
Smells a tad sulfury, then moves to a slightly acidic vinegar note which is soon followed by a gentle floral cherry note, and then sea water. Sounds strange, but I'm along for this ride.
Taste is more of a dance between the salt, subtle sour cherry, floral notes, and then salt again. But just when you think it ends, the floral comes back and lingers in the finish. Very interesting.
Overall, it's such a unique damn beer that I wouldn't know what else could be done here.

It has a lot of salty brininess, a lot of tart Bing cherry. So much of the latter it even become a bit cloying at times, which is surprising because the beer is so fresh, refreshing and light flavorwise.

Looks too clear for a wheat beer. Doesnt smell like rose blossom too much. But something floral. Iiked it a lot though. Very tasty. Great carbonation too. Well done.

This has a very interesting flavor profile. There is a bit of sweetness to balance the sour. The salt is very pronounced. I like it as a solid sour. May revisit this after a few more. Thanks to my bro for visiting Carton and gifting me this.

I had this on draught in a bar. It was served in a pint glass. It poured a clear golden-honey color with virtually no head or lacing. It smelled of brine with a distinct cherry aroma. Like a true Gose, it starts sour but quickly gives way to a salty finish. The cherry is present throughout - it starts sweet and ends tart. With its modest ABV of 4.5%, you could drink several without really feeling it. However, for me the Gose is an acquired taste and I'd find it difficult to drink more than one. I thought the cherry is a nice touch and gives Sakura character, which I would expect from a Carton offering.

Poured into a snifter. A hazy golden color with a frothy white head. Smells like wheat and bread with a faint floral, perfumey note. The taste is interesting, with a wheat up front, notes of black cherry and cola, and a mildly tart, salty finish. Not as tart as most Goses that I've had, but definitely interesting.

Jesus I love this goddamn beer. Starts out lightly sour, then gives way to touches of salinity and a hint of the plum vinegar and cherry blossom, curving ever so slightly sweeter on the finish. Nothing punchy, nothing in your face, just beautifully subtle. But still incredibly flavorful, and the transition from tart to salty to umami (from the sushi rice?) to sweet is a real mindfuck. Augie says this beer serves a distinct utilitarian purpose: to quench the thirst, a low abv crusher for the Jersey summer swelter. Fair enough, and I agree to some extent - I could down four or five of these on the beach on a hot day in mid-July. But really, I think this is one to contemplate and appreciate for its subtle complexity. Fucking beautiful. I wish I'd bought a case.

Traded for this beer months and months ago and finally got around to it today, right after the cherry blossoms for this year have run their course. The bottom of the can says "[email protected]" above the date of 7/14 but thankfully, this didn't taste too old or skunked when I poured it out and sipped it. This was a typical Gose in most senses but it was just a bit too salty for my likes and some of the other flavors could have been a bit more pronounced in the end.

Golden, thin, and with plenty of head, this had the look that one would expect from a Gose. Hardly any lacing left behind as I worked my way through this as the liquid slid down the side of my Carton glass pretty easily. Can't say what Rose tastes like but there wasn't much of it in the aroma as there were faint hints of lemon, cherry blossoms and tartness underneath the more potent salt. Much more of the latter was in the taste with a bit of hibiscus thrown in for good measure. The malt was a basic cracker and I had hoped that the sushi rice would stand out more, like when I had Sake many moons ago. The finish and carbonation was light, brisk, and just right for something of this ilk.

The same could be said of the alcohol as it was so low that I couldn't even feel it. While not a winner, this was a great beer for the season that like most other Goses, would hardly offend anyone who enjoys the craft. Not outstanding but a welcome change from the higher hopped brews that I tend to enjoy more. Just wish it had some more discernible flavors to it!

Sakura from Carton Brewing Company
Beer rating: 87 out of 100 with 62 ratings