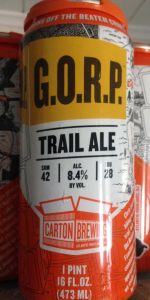 Notes: Chris and Augie grew up as neighbors next to the hiking trails of Hartshorne Woods Park. Back then, trail mix was called G.O.R.P., standing for Good Old Raisins and Peanuts, which described it perfectly. Familiar and dependable, G.O.R.P. trail mix was a combination of clean and complimentary flavors appropriate for being out on the trails. With G.O.R.P. beer, we evoke recollections of fun and flavors of the trails by adding peanuts and chocolate to a robust porter base that is then fermented on black raisins. Drink G.O.R.P. because it is fun to take the mix off the trail.

On tap at The Beer Hall Grill and Taps in Penfield, NY.

This smells really great, with a nice sweet fudgy chocolate character, a slight earthy nuttiness, a killer sweet dark fruit/raisin character, and a hint of roasted.

This does a great job of subtly teasing the trail mix flavors without bashing you over the head with it. The peanut flavor is the most subtle, just represented by a slight nuttiness. There's a lot of dark fruit character, sweet, and rich, definitely evocative of raisins. The chocolate additions adds to the undoubtedly already very chocolate-heavy base porter. There's a little bit of roast to balance the sweetness.

This is medium bodied, rich and pretty creamy, with a typical level of carbonation.

This was a really well made and very lovely beer. It's definitely one of the better Carton beers I've had.

Craft brewers find inspiration in the most conspicuous of places. But the trails should have been a no brainer. With a propensity of ale to taste like granola along with America's earthy craft beer roots, its taken a while for the actual ingredients of trail mix to find their way into beer. And that's where Carton's robust porter comes in.

Good Old Raisins & Peanuts, or G.O.R.P. pours with the common dark brown color that defines most porter, but its short and broken froth allows for low lying pitted fruit and nuttiness to skirt just above a toasty scent of chocolate, coffee and caramel. Flavors pick up on those malty contributions with caramel, toffee and an overall robust sweetness.

As the dark ale seeps into the tastebuds, the sweetness begins to share the stage with the toasted malt character of bittersweet chocolate, columbian coffee, roasted pecans and a pep of campfire. Raisins pull from the earthy sweetness with its own tar-like, plummy richness. Peanuts also spin off of the beer's natural nuttiness for a simple but effective late palate of granola.

Medium bodied, the beer's fleeting carbonation allows the porter to fall flat and somewhat thin on the finish. Despite its imperial status, the oils from peanuts have dampened the carbonation and effected the beer's scent, appearance, balance and overall charm. A late alcohol spice seems lightly of jagermeister as taste extends into a medium long aftertaste of grilled fruit and trail mix.

A: Black with foamy head and good lacing.
N: Coffee, chocolate, nuts, and caramel.
T: Awesome coffee notes mixed with chocolate and a nuttiness. Some minor caramel also.
M: Medium
O: What a great beer and so easy to drink.

Roasted if not sweet nuttiness. Husky, fibrous tasting chestnut that might have been over the fire for too long. Charred, moderately sweet undercurrent. Dusting of bittersweet chocolate, and fruity black currants and grapes that haven't been touched by the Sun-Maiden. Overall,a subtly sweet woody grape flavored beer that can be summed up with Rountrees Black currant pastilles.

I had this on tap at Blend Bar & Bistro. Carton's version of a 'trail ale' is so much bigger and better than you can imagine. It was quite a bit nutty, with that natural hearty flavor blending well with cocoa and dark fruits. Absolutely loved it and would love to try this again sometime!

Had this the other night up at the Cloverleaf as this was leftover from the Carton tap takeover. I used to eat trail mix by the bagful during high school after my sporting events and I miss those days so much given where things are now in my life. This beer was good enough to take me back to those carefree times while being a meal in a glass, so to speak!

Like the other beers I had at the takeover, this was dark with not a lot of head and minimal lacing as well. Roasted peanut butter and raisin in the nose with even more to the taste. The cloudy appearance was an indicator of how full this beer was as there was an exceptionally cloying and chewy mouthfeel to this. There were hints of chocolate and cookie dough with some peat moss underneath that. Not a lot of hops or booze here to detract and only a hint of roasted malt, which allowed the other flavors to shine through better.

There was enough alcohol here to warm me up even though this was one slow sipper. If you ever run out of s'mores, grab this instead. This was about as fun as a beer could get and easily the sweetest porter that I ever had, as the cocoa and nut flavors gave this a dessert feel. If only I had a bag of the old stuff from high school to enjoy this with, as this calls for a good accompanying meal in a great outdoors setting. Props to Carton!

I thought gorp was granola, oats, raisins, and peanuts, listing the ingredients of a certain trail mix but either way, this stuff has depth and complexity and a hearty viscosity you'd expect from imperial porter/stout.

This brew from Carton smokes Sweet Baby J! its thicker ( which I like ) has a great mouthfeel and aroma and the taste rocks. If you like Sweet baby J then this is a brew right up your alley. Carton is a fantastic brewery and this beer does not disappoint.

A: Dark brown in color, with a slight transparency, almost copperish. No head on this one and left a little lacing around the glass as you drank it.

S: strong hint of peanut butter, a slight sweetness at the end from the raisins, some sort of fruit in there also that I could not make out.

T: Earthy, with strong hints of peanuts and raisins just like the nose, strong molasse character as well.

M: Sticky and thick mouthfeel, with a good amount of carbonation, and burn from the booze.

O: Definitely taste like a trail mix, I think CARTON hit that point straight home, an average beer, but well balanced and flavorful.

The beer has an aroma of chocolate, roasted malt, lots of nuttiness, maybe some prune or grape.

The flavor follows of porter like roasted malt, sweet cocoa, chocolate, a hint of vanilla, and lots of nutty lots.

A good porter with maybe hints of raisin, but definitely not peanut flavors.

Appearance: very dark brown, if not black. completely opaque. small tannish head that leaves a lacing along the sides.

Taste: opens up with huge bites of peanut. the middle is full of raisins and dark crystal malts. other small notes of roasted malts, some earthy and woody qualities to it.

Overall: a well executed beer, it certainly has the aspects of trail mix. that being said I think ill stick to the original form. also think it could be a little lighter, as the heaviness along with the unique flavor makes it tougher to drink. but overall a fairly tasty beer

Dark brown with a creamy coffee colored small head. Lacing was overwhelming but did sit around the glass for a while. The aroma was unique with a robust amounts of dark chocolate, some burnt malts, a vague bit of peanut oil, and a heavily roasted characteristic. The taste was fantastic. Some peanuts, dark fruit, unsweetened chocolate, toasted malts, and a small hint of vanilla.

This is unique to say the least. I was half expecting a disgusting trail mix concoction but was pleasantly surprised by how well Carton got this to blend together.

Gotta rate this one highly for originality and execution. This is the direction Carton goes where no one else is going. In this case it really works.

A: Nearly perfect porter look, with rings of lace, body, and staying power.
S: The chocolate, raisins, and peanuts rise off the beer in subtle charred format.
T: The taste astounds for being completely original, true to trail mix, and yet a real solid charred, roasty porter without being cloying... finishes dry and long. A great flavor ride.
MF: Excels in body, tingle, finish.

You must try this beer, it's now my favorite porter, which says alot. Compares well with Chocolate Stout and RIS.

Had this on draft at GORP Day at Carton Brewing.

Appearance was a dark brown color, with normal head. was quite murky.

Mouthfeel - smooth, not too heavy considering the abv.

Overall, this was delicious. Glad i purchased some growlers!

From 03/23/13 notes. Had this on tap at Proletariat on St. Mark's Place in NYC. Served in an oversized wine glass.

a - Pours a dark mahogany brown color with one inch of light tan head and low carbonation evident.

s - Smells of raisins, peanuts, roasted malts, plums, dark fruits, chocolate, toasted malts, and burnt malts. Lots of raisins and peanuts; interesting but I like it quite a bit.

o - Overall an interesting, and good, porter. Lots of raisins and peanuts to it as promised, and alot of roasted malts and chocolate in the taste. Would like to have it again.

Deepest shade of brown, nearly black, with hints of hazelnut brown when held to the light. Light tan head quickly dissipates to nothing but a crown, leaving a light rim of persistent, half finger wide lacing. Nice.

Modest, restrained nose, but when you dig deep and let it breathe there are a lot of things going on here. Strong roasted characteristics, to be expected in the style, with espresso bean leading the way. Vanilla bean and raisins give a mildly sweet, but also savory note. Peanut oil and peanut shells combine to round out a very interesting aroma profile.

Silky and seductive with notes of round dark fruits. Plums, raisins, and dark figs specifically. Tiny hints of black licorice. Moderate dryness brings hidden flavors of peanut shell. Considering the novelty of a trail mix inspired beer, this isn't reinventing the wheel, but with the influx of so many (sometimes absurd) experimental beers, this is refreshingly traditional and insanely drinkable. Alcohol is also well disguised. Also, at 28 IBU, this is balanced and not a hop bomb like so many dark beers are nowadays.

Carbonation is concentrated and punchy, a little cloying, but overall this is silky and smooth, exactly what I love from a dark beer.

Well done again Carton. I almost expected a strange experiment, but instead I got a remarkably drinkable and very flavorful porter that was a true pleasure to drink.