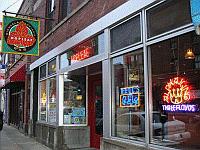 4.36/5  rDev -2.7%
vibe: 4.5 | quality: 4.5 | service: 4 | selection: 4.5
Holy crap - the walk from the Red Line station to Hopleaf in a near-blizzard was way too cold - had to stop at the CVS and pick up hat and gloves. Got to Hopleaf around 5:00 pm on a Friday afternoon (Feb10) and the place was moderately busy but filling up quickly. Everyone I talked to was all about the beer and great beer it was. Approximately 40 taps featuring a nice selection of local Chicago brews (including Three Floyds Zombie Dust during our visit!). Servers are very beer knowledgeable and very in tune with the current inventory. Didn't eat there but noted several delicious looking dishes passing by. Great crowd, great beer, great service - a great place for beer in Chicago!
Feb 18, 2012
More User Ratings:

4.54/5  rDev +1.3%
vibe: 4.25 | quality: 4.5 | service: 4.5 | selection: 4.75 | food: 4.5
A Belgo-phile's classic gastropub, probably premier in Chicago.
My bad not to have visited until today. But... very glad I did.
Sat in the jardin de bière on a warm summer day. Protected from the sun by Karmeliet umbrellas and lush trees.
A great place to refresh and made the bar (of traditional character) seem average (even tho the bar is above average.)
As a Belgo-phile the quality of the offerings are impressive, despite my having drank almost all of them. I have to conclude that Hopleaf has good taste. Service was unusually good. I chatted with the bartender before going to beer garden. (He encouraged me to go to the garden; possibly thinking I was so talkative it might interfere with other customers.) Service in the garden was fine and the Selection, as I implied, impeccable. It was mid-afternoon, so all I ate were the frites. But they were good enough to rave.

After a quarter century of living here, I need to go back to Hopleaf a second time ... and soon.

Reviewed by sb17 from Pennsylvania

4.83/5  rDev +7.8%
vibe: 5 | quality: 5 | service: 4.5 | selection: 5 | food: 4.5
I stopped in on a busy night, so I had to head upstairs to a second bar area. Tons of selections (not exaggerating - at least 60 taps, with additional brews in bottles or cans). There are hard to find beers, and everything I tried was fresh and delicious. I didn't eat here, but what I saw looked great. It's dark and homey, filled with brew-related decor and worn in furniture. During my time there I saw couples and families, both young and old.
Dec 27, 2017
Rated: 4.59 by wjbent from Florida

Reviewed by williamsgodfrey from Illinois

4.78/5  rDev +6.7%
vibe: 5 | quality: 4.75 | service: 5 | selection: 4.5 | food: 4.75
This is likely my favorite place in the entire city of Chicago. I currently live about 1.5 miles away and probably make it in here once a week or so. Phenomenal service, great atmosphere (no TVs!), a huge, huge selection (something like 70 rotating beers on tap and about 300-400 on the bottle menu) with an emphasis on Belgians, and the food is great. Hopleaf is recognized as one of the first "gastropubs," whatever you might interpret that to be.

Reviewed by BSiegs from Illinois

4.76/5  rDev +6.2%
vibe: 4.25 | quality: 4.75 | service: 4.75 | selection: 5 | food: 4.75
An absolutely stellar Belgian bar/restaurant....gastropub....whatever you call it this is one of the 'must visit' places for beer fans in Chicago. The crowd in here is usually mixed, a range of ages, plenty couples and families mixed with friend groups. Can get loud, with the cavernous open main room really amplifying the festivity going on here. Beer selection in bottle and on tap is exemplary. There is a lot of American brewery representation but really if you're here you want to try their extensive Belgian selections.

Reviewed by DMcGirr from Massachusetts

But they seriously do have a phenomenal selection of beers. More than worth the trip.

Reviewed by wapcap from Nebraska

4.09/5  rDev -8.7%
vibe: 4 | quality: 4 | service: 3.75 | selection: 4.5 | food: 4.25
A great place not to far from Wrigley. Stopped in there twice on a recent trip. They have a very good and diverse selection.
The place is bigger than it seems, and both times it seemed packed, but we found seats.
The foods were good and they source some local foods.
The beer selection was very good.
All in all a great place to frequent when in the area!