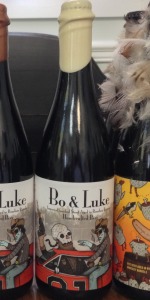 750ml bottle from Shrubber85. Black pour with a small ring of beige head. Chocolate and peanut butter in the aroma, roasty malts. Taste comes in like a dark chocolate Reese's Peanut Butter Cup, paired with some roasty bitterness and a bit of alcohol warmth. delicious!

750 ml tan wax capped bottle, sticker on bottle says Peanut Butter 2018, 13% ABV. Served in a snifter, the beer pours dark brown/black with about an inch or so tan head that stuck around for a long time. Good amount of lacing, too. Aroma is nice, the brew smells like bourbon, vanilla, oak, dark fruit, smoked malt, roasted malt and peanuts. Taste is similar to the aroma, with bourbon, vanilla, oak, cherry, burnt/charred malt, smoke, rye spice, bittersweet chocolate and peanut butter flavors. Peanut comes out more as it warms, but it's not strong in either the aroma or the taste. Mouthfeel/body is full, it's slick and smooth with a moderate amount of carbonation. Overall I thought this was pretty good, I just wish the peanut butter in it was stronger but that's a very minor complaint. Definitely worth picking up if you're into barrel aged imperial stouts!

The softer and friendlier version of Bo & Luke layers on the senses with an aura of playful peanut butter. Helping to buffer its smoky underpinnings and giving extra rise to the bourbon and malt, the children's lunch spread makes its way into adulthood in a very big way.

Just as dark and deviant as the original outlaw ale, its peanut butter character hardly shows in the beer's appearance, except in the way that it desegregates the longevity of its creamy espresso-like froth and any of its residual lacing. Yet, black like tar, its murky matte quickly turns to looks as much of dark coffee as of stout.

The common foundation of burnt toffee, dark-roast coffee, cocoa, toasted walnut and its familiar waft of campfire are all stalwarts on the nose. However, its new ribbons of peanut butter tether right through and do so in a seamless manner. The savory nuttiness tempers the smoke and seems to bury its vinous fruit character while heightening a note of tobacco and oaken caramel.

The beer's charred sweetness seems of burnt marshmallow as its deeply embedded sweetness is brought to life with the peanut butter, smoldering embers and its cocoa and coffee-like robust bitterness. Layered within is the light tartness of vinous currant, berry and plumb that turns woody, caramelly and vanilla-laden. This all makes way for the bourbony finish with lingering char and wood.

Full-bodied and lush, the peanut butter gives the initial taste a creamy and silky feel but turns powdery and with a touch of grit late. As the carbonation seems to evade the ale early, the brunt of the beer's weight lays heavily on the taste buds and saturates them full- making the beer port-like as a sipper. Its feather finish is assisted with wood spice and tannin capabilities.

With a plethora of complexity already, the additions of peanut butter carries a medium-intense and well balanced complement to the rich base beer. But the addition lessens the beer's appearance and body by its oils and has a hard time dissolving completely.

Appearance - Black, shy of inky. Not a big head, but a medium light khaki collar.

Taste - Bourbon is better blended. Still not rich. Sweet. Dark chocolate. Smoke is nice. Peanut butter comes out faintly in the back.

Overall - The adjunct isn't very strong. This is a phenomenal beer despite the faint peanut butter.

750ml bottle poured into HF fest glass. Fourth bottle of Donfrap's birthday tasting, final bottle of the set. Thanks Don for the share!

A- Pours similar to other B&Ls- dark brown, almost opaque in glass with slight translucency around the edges, slight mocha head that recedes to flat top, maybe slight less head then regular.

T- Slight smoke, balanced bourbon, subtle peanut butter that comes out a little bit more on the finish with some chocolate malts. An interesting variant, peanut butter balances nicely, I prefer the regular slightly more though.

O- Peanut butter added a nice presence to the base beer however it took away a lot of the smokiness and overall I think I preferred the regular a little bit more. Overall of the variants I preferred the habanero the most and then this. This was definitely better then the tea though and looking at the ratings it seems almost as people may have gotten this confused with the tea. After having tried all the variants I think they are interesting to try but don't improve on the base beer and based on how limited they are probably aren't worth going after.