Rules Are Rules
Against The Grain Brewery & Smokehouse 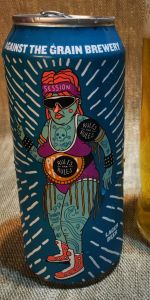 OMFG! I have a backlog of Against the Grain CANs & today is the day that The CANQuest (tm) begins to do its job. Why is a stylized Deb Turner on the label? We have never met IRL, but some mutual friends introduced us on Facebook. Deb is happily married with kids, but we are kindred spirits. She is heavily tattooed & lives in Chicagoland & posted at one point that she so intimidated people on the Brown Line that they moved to get away from her. Most of my piercings have closed, but in shorts & a t-shirt on a summer's day with flip-flops? They'll freak! We're going to a Sox game & drinking beer before, during & after.

I Crack!ed that CAN open as only I know how and CANmenced with an inverted Glug, resulting in three-plus fingers of dense, foamy, bone-white head with great retention. Color was an oh-so-slightly-hazy Straw-Yellow (SRM = > 2, < 4). Nose smelled of lemon zest, biscuit malt and if you haven't intuited it already, Lemon Biscotti from Enrico's in PGH! That CANbination, to me, says German Pilsner. If you are looking for a good summer cooler filler, look no further than a well-made Pilsner. I prefer the Czech Pilsners for their emphasis on hops, but if prevalent malts is your bag, go German! Mouthfeel was medium. Taste was very lemony up front with a pleasant biscuity malty presence underneath. Wow! I CAN drink this all day. Finish was dry, but more like a biscuit-malty dry, not puckering or gaspy. I will keep saying, If you are looking to go to the beach this summer, fill the cooler with craft lagers! I could drink this all day on the beach, if I was so inclined.

Poured from the 16oz can into a nonic pint, Poffo Pils comes out a bright yellowy gold color with a fluffy two finger head that dies down and doesn't leave much lacing.

Smell is pretty generic, like a beefed up version of a basic pilsner. Mostly sweet pilsner malts and grain, touch of hops at the most. Tastes a bit better, less sweetness overall. Nice big wave of pilsner malt, some grain in the middle, doughy, touch of lemon sweetness and a bitter slightly dry finish.

Overall it's a solid pilsner I could visit again.

I poured from a 16 oz. undated can into a classic pils glass. Ms. Thunder Thighs on the label is a bit frightening but I soldiered on. The beer was bright and clear - somewhere between straw and butterscotch colored with a frothy white head. Very pretty.

The aroma was of clean, cracked grain and reminiscent of a bag of lemons.

The flavor was a crackery dry maltiness. Lemony with a hint of vegetal sweetness. After this came the spicy sizzle of earthy hops. I recognize this similar noble hops profile from some of my favorite Czech/Bohemian style pilsners. This one finishes clean and dry. Classic.

There was plenty of zesty carbonation in this medium bodied beer. Rich and smooth on the tongue but light and clean in the end. Overall this is an easy to drink, flavorful lager that I would chose over Oskar Blues Mama’s Yella Pils or Victory Prima Pils any day. The fact that it is offered in 16 oz. easily packable cans is bonus.

unique and very american for the style, not because its hoppy though, but because it doesnt really follow any pils tradition at all. its not dry enough to be czech, and the hops are different, and the grain isnt right for a german one, its just in between and different. almost clear, radiant yellow, and heady, looks great. the nose is subtle too for how bold the flavor is, a hint of grassy euro hops, but with some northwestern type candy resin to it, and a bubblegum thing that reminds me of the dust on the outside of bazooka or bubblicious. that gum thing is intense the the flavor finish, really almost cotton candy-esque, strange for the style, but also somehow really appealing with this slightly bigger grain bill and dramatic carbonation. i have to imagine there is some corn in here. its not like any other pilsener out there, and its fruity thing seems to really work. a lot of times american craft pils types really bore me, just not much going on. this is a refreshingly new perspective on this niche, and i really digging it for taking me someplace new. not my favorite of their beers, but memorable just the same. the pint cans look cool too.

Built to beat the long heat of mid-summer days, Agains the Grain brewers delivers a crisp pilsner taste that celebrates refreshment, a high rate of consumption and effortless fatigue on the palate above that of heightened flavor or contemplation.

Poffo Pils pours the expected pale straw color, but casts a modest but uncharacteristic haze. Above the canary hues sets a spritzy, creamy head that collapses back into the beer as soon as the carbonation subsides. Sweet cereal aromas carry soft floral and spice while the initial taste favors the natural grain sweetness of fresh-kilned barley malt.

Little changes across the middle palate as the floral turns to light apple and lemon fruitiness which is also highlighted with the beer's mild sulfur taste. The soft sweetness of baking bread, powdered sugar and straw retreat into a late taste of damp hay. Its mildly spiced finish offers a peppery balance to the residual sweetness as the finish comes very quickly.

Decorated with lemongrass and fresh-cut grass, the beer's finish resists complete dryness or bitterness as the medium-light lager stubbornly retains its grain sweetness even deep in finish. Fairly clean, crisp and refreshing, its fast fleeting carbonation leaves the finish lightly lumbered upon the throat.

Rules Are Rules from Against The Grain Brewery & Smokehouse
Beer rating: 82 out of 100 with 19 ratings