Pile Of Face
Against The Grain Brewery & Smokehouse 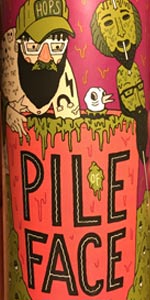 Notes: What's the first thing you need to do when you start a brewery? Develop your logo, of course. With any potentially decent brewery, your logo must be a skull, it has to be a skull, you'll be laughed out of the room if you don't have a skull. So we went hunting in the area where all the great skulls have come from and were shit out of luck. By those fateful dumpsters all we found was this deformed neanderthal type deal, or maybe it's from an ape, and a big ol' pile of face. To celebrate our lack of success in finding a really cool skull, we are embracing another required cliché by brewing this American IPA. A modicum of simple malts provide the mediocre backbone to the mountain of various hops that are utilized and rotated throughout the brewing process. Look for dank overtones supported by various citrus and heirloom fruits. It's the straight forward fuckin' IPA that you always wanted from us. You lucky bastard.
View: Beers | Place Reviews
Reviews: 43 | Ratings: 153 | Log in to view all ratings and sort
Reviews by woodychandler:

The seCANd half of yesterday's Happy New Against the Saugatuck Grain Beer Sunday (Week 699) left me with several more CANs to be added to The CANQuest (tm). Once I CANplete their reviews & ratings, they will become an entry in the current WBAYDN thread.

From the CAN: "Brewer Owned"; "American India Pale Ale"; "Art & Layout by RobbyDavis.com"; "Rummaged Delight!"; "In a world where all the skulls are being used up, we are left with nothing but piles of face. But fear not, that's where the story is truly told! Pile of Face is the institution of American IPA, with all the character and drink-ability you would expect as we celebrate American indulgence!"

I Crack!ed open this CAN and beCAN a heavy-handed Glug since it was a nice, fresh CAN. I watched in fascination as it quickly puffed up & formed two-plus fingers of dense, foamy, rocky, tawny head before falling away, leaving modest lacing behind. Color was solid Amber (SRM = > 7, < 9) with NE-quality clarity. Nose was a little light, kind of tropical, lightly citrusy, but not really well defined. I wish that they had CANmitted in terms of the hops being used, at least in the aroma. Mouthfeel was medium. The taste was a real mélange of hoppy flavors, ranging from an almost prevalent tropical fruitiness to pine dankness to grapefruit and orange citrusiness to a light biscuit maltiness. It was actually pretty good with a bitterness that was not over the top nor was it a tropical fruit salad, neither of which are very pleasant. Finish was dry, lightly bitter, satisfying, but kind of middle of the road overall.

Golden amber, slightly hazy. Foamy head with streak lacing. Aroma is very faint. Some light orange, bread, and fruit. Flavor is herbal & grass, with some pine and grapefruit. Bread like malt taste in the finish, with a bit of hops bitterness. A decent beer overall.

I loved the balance between malt and bitterness in this one. Bready/Biscuity and Dank/resin

Tasted back in mid-march

L: clear copper color, one finger thick white head. Lots of effervescence.
A: Not much hops but a faint malty smell.
T: Malt-forward with very little hops. Slightly sweet flavor with a moderate bitterness that lingers to the aftertaste along with a little alcohol-y flavor. There is a malt flavor that is a little different from what I'm used to but unsure how to describe it - a nice flavor to it though.
M: A nice clean feel with just a little stickiness on the lips.
O: This is a traditional IPA that measures up well. I would like a little hop flavor to it but that's just my bias.

Great taste with a malt taste at the end.

Can says 13/03/19. I assume that means best by march 13th. If your brewery has a can dating machine please just tell us the canned on date. I dont know how long you think your beer is good for, and i just want to know how old it is.
Unfiltered orange color. Not hazy, not quite clear. The smell is faint, sweet and hoppy. Tastes of citrus and stone fruit, but not a very strong flavor. Not bitter, not juicy. Overall its pretty forgettable.

A: A pale yellow brown in color, with a medium sized white head.

T: Light grapefruit, and resin bitterness. Perhaps a touch bitter too.. Maltiness is in there as well. But something just seems off about this one.

O: Overall this feels very small town brewpub to me.. passable as an IPA, but not extraordinary in any way.

Pour a richly orange amber/gold with a goodly bit of carbonation and a modest head that dissipates actively to a thing white layer.
Smell is rich with a malty sweetness up front and tropical citrus fruitiness on the tail end.
Taste leads with tropical and melon fruitiness, this fruitiness carries through morphing into a more citrus heavy presentation and trailing off into a grassy ness with a light honey note. Pleasant modern IPA flavors.
Feel is excellent, well bodied and nothing near thin but nicely crisp leaving the tongue clean and ready for another sip
Overall this is a surprisingly lovely and straight forward IPA from a brewer who usually has a twist. Nice modern fruity hop flavors with a decent malt body and just enough herbal/citrus rind bite to keep it all together. Very pleasant

Notes via stream of consciousness: So what is this, just an American IPA? OK. It's poured a very hazy deep gold/amber in color beneath a short head of white foam. The aroma is fruity, mainly orange-like, but also with some apple and soft apricot, maybe some underlying tropical notes. Some grainy malt comes through as well. The flavor follows with a basic pale ale malt base and similar hops (somewhat citrusy, some stone fruits, some very mild pine). It's nicely balanced by a median hop bitterness and it finishes mainly dry with some hoppy fruitiness lingering. In the mouth it's medium bodied and crisp. Overall not bad, but neither is it anything really exciting... still, it's better than average.
Review# 6,046
3.75/3.75/4/3.75/3.75 = 3.85

Appearance: yellowish orange in color with a 1" head that lasts.

Overall: a good beer that was easy to consume.