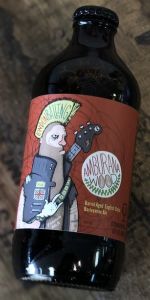 Appearance: Pours a cloudy mahogany color with a half finger ecru head; the head fades to a ringlet and floating island and leaves sprinkles of lacing behind

Overall: After being a bit disappointed with the base version, I am ecstatic about what the Amburana wood brings to the beer; gone are the charred caramel and bold hop elements and this tastes much more like the English barleywine of my dreams

Very complex and enjoyable.
The Amburana Wood does something to the taste that is quite remarkable.
Caramel and vanilla notes are very noticeable.
I liked this one very much.

In celebration of the Amburana wood and the barrel aging that comes there forth, Against the Grain tries the legume with their English styled barleywine for a slightly fruitier, spicier take on the bold, malt focused ale.

Dense and viscous at its pour, the rugged London Balling (Ambruana Wood-Aged edition) once again layers gently into the snifter with a hazy, tawny and rusty appearance. As a delicate creme swirls about the surface, the ale quickly reclaims its bubbles and renders into a brandy-like austere. And those boozy comparisons translate to scent with a rummy sweetness that wraps around the tongue. Its sultry fruit, spice and savory aromatics pull from the glass and fully saturate the olfactory senses.

The middle palate is nearly overwhelming with rich caramel, butterscotch and maple. Peps of buttery brown sugar and pecan offer succulents while a nutty cashew and candied fruit character counters with its own gentle earthiness. Herbal with tea and softly shaven woods, these become the hook for the introduction of exotic wood and its vanilla, caramel, cherrywood and bourbon-esque empowerment. All the while, estery influence of apple, cherry, plum, date and fig are suggestive of fruitcake along with a toasted caraway spice.

Decadent in finish, the full-bodied taste and texture weighs on the tongue and saturates the tastebuds to utter completion with its piercing booze and understated carbonated lift. Its "barley liquor" character numbs the palate and seduces the taste with its boldly laced savory character. Enjoy much more as an after dinner aperitif rather than a drinkable or refresher of a beer.

I cannot get enough of this, literally and figuratively. Amber look, sweet herbal smell, smooth taste with defined notes of the phenomenal Amburana wood, and overall something special for special times. ABV may be heavy but you can barely taste it. This is technique and artistry at it's finest. "Barrel Aged English Style Barleywine Ale" is not for all but if you can handle this heavy trip then take it.

Pours a smooth, translucent copper with a thin layer of head. No lacing or retention, very modest legs when swirled. Smells a bit spiced on the nose from the amburana wood, but with additional vanilla and cherry accents, along with subtle herbal notes. The English hop varietals are still on full display here, and we have more barrel character in this release than the standard edition of London Balling, thanks to the uncommon barrel imparting some unfamiliar flavors, hints of cinnamon, plum, and potpourri. Moderately thin body and a dry finish with some botanical bitterness. I'm a bit conflicted on whether I like this more or less than the regular version (setting aside the price), but this is definitely the more distinctive take.

S - FUCK. I've loved every amburana aged beer atg has put out so far but the aroma on this is indescribable.

M - very subtle and laid back. Drinkable and mild feel.

Overall - thought this was going to be awesome when I cracked it... but it just drank too bitter and cardboard like to love.

London Balling - Amburana Wood-Aged from Against The Grain Brewery & Smokehouse
Beer rating: 88 out of 100 with 13 ratings