The Brown Note
Against The Grain Brewery & Smokehouse 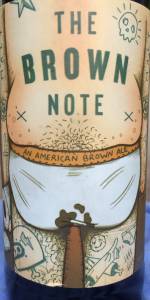 Notes: The brown ale to end all brown ales. Enjoy it, because there is no longer any reason to drink another. You’ve reached the pinnacle. A healthy blend of traditional British malts give this popular style a semi-sweet, biscuity, slightly roasted flavor. Oats thicken the mouthfeel, and a handful of specialty malts add complex chocolate, toffee, and caramel notes. The hops are mostly traditional, earthy British hops, but we cocked it up a bit with some Cascade late in the boil just to show those snooty Brits that we don’t approve of that Constitutional Monarchy crap.
View: Beers | Place Reviews
Reviews: 106 | Ratings: 478 | Log in to view all ratings and sort
Reviews by thebeers:

Solid brown color and about a finger of tan-tinted head with a vigorous pour. Nutty, roasted-malts aroma, which carries over to the taste. There's also some hops bitterness and a little astringency. Fairly thick-bodied, with plenty of carbonation despite the modest head. Pretty one-dimensional, but it delivers as a middle-of-the-road brown. Might drink more of it if it were local, but it sells for a premium around here.

Plopping open the can, it eeks a sneaky hiss and sharts a chestnut colored body with messy streaks of red/cranberry. Analyzing it further it shows 60% opaque; with a generous upper decker of 3 sterile fingers.

Turn on the vents! It reeks of malt, caramel, chocolate, rice, and walnut. The smell is not too hefty, but loud enough to get a good waft.

This stool sample tastes nutty! With roasted malts, a nice burnt hop flavor, and nods to caramel, it's a solid drop.

Drinks smooth like a relaxing bowel movement. Some gassy bubbling going on out front, and a starchy finish.

The can says to drink it at 48*F, but I find it's better colder. Although sometimes steamy browns are the most relaxing, so who knows. This beer is the shit. Literally.

Really don't see the allure of this one I guess people just buy it for the silly cover art. It is quite quaff able with some nut and toffee notes but its just too light tasting to be "The brown ale to end all brown ales" like the cover suggest. Would need more body and some chocolate notes to pull that off. Still its not bad.

If the bottle art were less gross this beer's score would jump about fifty points. I mean, seriously guys, it's good to take design risks and I'm not saying you need to focus group this or anything, but do you know a single person who finds poop appetizing?

Anyhow, once you get the glass away from the bottle, you get a nicely sessionable brown. A nutty, lightly sweet start gives way to a finish of more sweet malt balanced out by medium-strength hops. Nice.

Brown ales used to be craft brew staples, but they've become rarer and rarer these last few years. I'd love to see a resurgence, especially my go-to brown (Rogue's Hazelnut) costs 12 bucks a sixer. But why the awful marketing? Are brown somehow not considered edgy enough, and so we have to make them appear more Xtreme by making poop or semen references? A good beer is a good beer, guys.

A really nice looking beer. Body is a transparent brown hurt that pours with a finger off white head.

Flavor is good but a bit of a let down after the nose. Lots of roasted malt with a hint of sweetness in the back.

Medium carbonation and a smooth yet slightly watery body.

This is as advertised a good brown ale. Nothing fancy or complicated just a good beer. I would like a little more balance and a little less roasted malt.

It pours a chestnut hue of brown with three fingers worth of head. The aroma is nutty and with notes of freshly ground coffee. There many be some notes of fecal matter but that's probably because I'm staring at the label. The taste is bready upfront with some lingering sweetness and a nice bitter finish. Medium body and a barely noticeable carbonation. This is a truly amazing brown ale.

Against the Grain actually goes with the grain while brewing this charming Northern English-style Brown Ale. Covering the bases where beers like Newcastle trail off- the taste captured in this true-to-form ale are playfully bold and surprisingly refreshing.

Like any other Brown Ale, the beer pours in a not-so-shocking brown hue. Cast upon a mild haze, the ale releases a creamy off-white head to top the beer sparingly but with a steady collar of lace. Its dainty foam character is in stark contrast to the masculine beer underneath.

Medium aromatics of toast, light chocolate, roasted nuts, caramel and mild fruit rise from the glass and shows off its slight robust nature. To taste, the sweeter malts greet the front of the mouth with deep caramel, brown sugar, and light chocolate. As the beer traverses across the palate, it leaves behind its initial sweetness and favors a toastier, light coffee, walnut-type earthiness with slight floral and herbal bitterness. Its pleasant taste trails with the taste of malt but not all the residual sweetness that's normally expected from those malts- this yields a semi-dry taste that's as crisp and refreshing as it is bold.

Medium bodied from head to tail, the beer's early but albeit terse carbonation lays on the tongue with cask ale-like effect. But as the bubbles vanish, it leaves the beer thin and waning heading into a woody-toasty finish of mild minty warmth.

The Brown Note is as classic as they come, if we're talking about Brown Ales. Though it's somber in complexity, it more than makes up for it in effortless and ease of consumption.

This is pretty good, but there are better at half the price

Deep brown in color with very light penetration to light. There's a fingernail of beige resting on top. Light Brussels lacing. There's a nice sweet aroma that is primarily caramel and perhaps some light chocolate. The taste is exactly as advertised in the nose with sweet caramel and light chocolate notes. The mouth is very smooth and creamy.

Pours a pretty nice dark brown color, very nice carbonation, with a pretty nice thick/creamy one-finger plus off-white head, which also leaves some pretty nice sticky lacing behind. The nose is malty, with some chocolate/toffee, nice nuttyness, roasty. The taste is really nice, malty, roasty, very nice touch of chocolate/toffee. Medium body, with a very nice dry/bitter finish. Overall, this is my first from this brewery, and it surprised me, very nice brew.