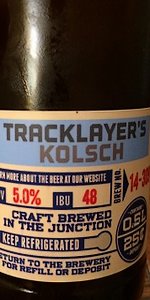 Tallboy can from the LCBO; best before Aug 18 2016 and served slightly chilled.

Pours a pale, slightly hazed straw yellow colour, capped off with a solid finger of puffy, soapy white foam that slowly recedes over the next 5 minutes or so. The inside surface of the glass becomes caked with sticky lacing as it seeps ever downward, leaving a wide, foamy collar remaining in place afterwards. Looks good, but like most examples of this style there's not much to say about the aroma... grainy, gritty pale malts, crackers, with slight hints of grassy hay and weakly herbal hops.

Solid example of the style that doesn't stray too far from tradition. The pale malts act as a clean-flavoured backbone, providing notes of cereal grain and doughy, crackery sweetness that soon give way to grassy, herbal, lightly spicy Tettnanger hops on the back end. Slight hints of white grape skin, leading into a rather abrupt finish. Bitter, leafy hop flavours carry on into the aftertaste, which dries out the palate gradually. Light-bodied, with assertive carbonation and a crisp, prickly, highly refreshing mouthfeel. Sorry to disappoint, but I can't find much of anything to complain about with this one.

Final Grade: 3.98, a B+. Tracklayer's Kölsch is a real winner - in fact, I find Junction's take on this (increasingly popular) style to be considerably better than nearly all of the ON-brewed "kölsch-style" beers that have come out over the last year or so. Better than expected, and certainly one of the more well-crafted domestic examples of this style to be released to date - though I'll admit that it does seem a little more hoppy/bitter than the imported stuff from Köln. I don't consider that a problem, but some might. I'd probably pick up more cans of this if it were available locally, and would encourage other BAs to give it a try as well.

Pale straw in colour with little head or retention. Nose is leafy green hops with hints of caramel malts. Flavor is a tad metallic, but I nice bitter hop presence with a musty caramel malt backbone. A decent representation of the style, easy drinking and approachable.