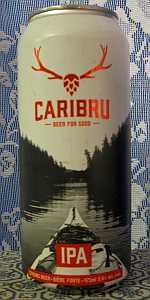 What a great couple/few days the opening of July 2019 has been for The CANQuest (tm)! M, 01 July was CANada Day & I CANebrated by drinking, reviewing & rating (in that order) a whole buncha CANadian beers. These were part of a big box dropped off for me by my local, in-person trader, @tone77 , following his foray into The Great White North. His generosity is boundless & although I CAN't quite keep up, my CANvalesence following prostate removal surgery is providing me an opportunity to really clear the backlog. Here comes CANother CANned beer from CANada!

From the CAN: "Beer For Good"; "Caribrou donates 5% of all sales to local causes that matter to you."; "A Blend of West Coast and New Zealand Hops, Barley, Yeast, Water with fresh Mango addition."

I was SO anxious to Crack! open the vent & get in a Glug that I almost lost myself in the mêlée & its attendant CANfusion! What happened? you ask. I was jonesing for a hops fix, man! So many Lagers over these past CANple of weeks have left me weak. Man, I upended that crazy CAN for an inverted Glug the likes of which used to drive my batty ex-Old Lady bats! I sat back & watched as it formed a groovy two fingers of dense, foamy, rocky, tawny head with great retention. Baby, that time in the hospital showed me just where the best veins are, so I tied off & got ready for a mainline shot. Hops Express, next stop, Woody ChANdler in LanCANster, PA! Color was an oh-so-slightly-hazy Golden-Amber (SRM = > 5, < 7). Nose was quite hoppy & bitter, but the mango was kind of a light afterthought. Fine by me since it mango is only an adjunct & NOT a part of the beer's name! Mouthfeel was medium as I jammed the glass into my mouth for that initial taste. I untied the rubber hose that I copped at the hospital & sat back, allowing the deliciousness of the bitter hops to course through my system. Man, I had forgotten just how gooooddd hops CAN make me feel! Mmm. I would be curious to know the hops CANbination used in this beer since its bitterness belied the inCANsion of New Zealand hops, which are generally fruitier & tropical. This was much more Pacific North West Coast with a pine woodiness that worked well with the mango. Finish was dry & baby, I was finished! I may need to lay down & recuperate from my recuperation at this rate.

Poured from a 16 oz. can. Has a dark golden color with a 1/2 inch head. Smell is mild, light mango. Taste is very malt forward, some herbal notes, mild bitterness, hints of mango. Feels medium bodied in the mouth and overall is an ok beer, I think it drinks more like an English IPA than an American one.

473 mL can from the LCBO; coded J278, which probably translates to Sept 27 2018 (merely a guess - I'm assuming they use coding conventions that are similar to those of the macros). Listed at 5.6% and served barely chilled.

Pours a hazy, translucent golden-yellow colour, capped with nearly two fingers of fluffy, sparkling white foam that falls apart within five minutes or so. A gorgeous coat of lacing has been applied in its wake, with a lumpy collar of froth lasting on; looks good to me. The aroma leaves a bit to be desired, not being particularly fragrant at all - there's some lightly caramelized, grainy malt sweetness, but other than that it's fairly muddled and uninteresting. The mango doesn't come through very clearly, and beyond that I'm just getting vaguely citrusy, floral, resiny hops; maybe a touch of canned pineapple, too.

Not bad - the mango adds a subtle (but much-needed) tropical fruit aspect to what would otherwise be a relatively indistinguishable IPA. Aside from the mango, it tastes of clean, crackery pale malt sweetness, with suggestions of mandarin orange and pineapple juice cropping up mid-sip and lingering on into a pine resiny, floral, moderately bitter finish. Medium in body, with low carbonation levels that lightly tickle the palate, resulting in a soft, smooth texture that I rather enjoy - in fact, besides the appearance, it's my favourite part of this brew.

Final Grade: 3.75, barely eking out a B+. Caribru IPA is a serviceable offering for hopheads, but I'd be lying if I said I was especially enamoured with it. Maybe they were hoping to hop onto the NEIPA train, but if that's the case I'd say they missed the target because it's not particularly juicy (in spite of the presence of actual mango), and its bitterness is assertive, making it more in line with your typical American IPA. Commendable charitable intentions aside, this is a mostly forgettable beer that I might return to, but not frequently.

Appearance - A rich dark golden color is poured with orange tint. A finger plus of off-white head, with very good retention. Hazy through and through. A very nice looking brew on the whole.

Taste - Lots of buttery biscuit grain (what? this is an IPA) middling bitterness and a suggestion of mango before a sharp transitions to orange and grapefruit pith. More APA than IPA and the buttery qualities are just not right here.

Mouthfeel - Smooth, medium to thick bodied and a bit syrupy. Carbonation is about right.

Overall - OK IPA, but the buttery biscuity flavor comes on way too strong for an IPA. Worth a shot but unlikely to repeat.

Not much mango except on the nise - a light beer with moderate hop bitterness - borderline APA / American IPA.

I got a can of this beer from a beer store in Sault Ste Marie whilst there for my son's hockey tournament. It poured a hazy orangish with white head that is leaving some lace. The scent is mild dank fruit notes. The taste was nicely balanced and easy to drink with subtle citrus flavor. The mouthfeel was medium in body with good carbonation. Overall its a good beer.