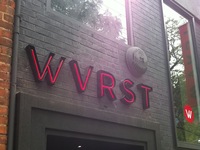 Rated by yancot from Canada (ON)

4.09/5  rDev -1%
vibe: 4 | quality: 4 | service: 4 | selection: 4.25 | food: 4.25
This is a very neat concept, well thought out and actually put together and presented nicely. It's an indoor type beer hall, that serves a variety of different sausages. They are very nicely done, and there's a variety of them including other game animals, and even a vegan option (although you'd be hard pressed I think for a vegan to show up here).

Along with that is an extensive list of domestic Canadian and foreign beers, with a good emphasis on German producers as well. Very big list actually, even if some of the names are fairly common.

It's counter service but the staff are very good and also are eager to explain anything, particularly if you have never been there before, but you will have to walk up and order to get what you want. THere is also a side bar where you can sit as well if you don't want to share the communal tables.

Reviewed by Taybeh from Minnesota

4.18/5  rDev +1.2%
vibe: 4 | quality: 4 | service: 4.25 | selection: 4.25 | food: 4.5
This was a fun place to go for lunch...half cafeteria/half bar feel, in a nice urban neighborhood, walkable from the convention center downtown. Nice space, kid friendly, big long tables that have you sitting next to other parties, but I was at the bar. Really friendly cool staff, happy to talk beer and make recommendations (though it wasn't very busy). Good selection of Canadian beers across different styles, a few Euros and a few American offerings. I ended up going with a few lagers, because it just seemed right given the really excellent elk wurst that was on the menu. A little pricey, but I though it was well worth it.
Jan 26, 2016
Rated: 4 by VABA from Virginia

4.59/5  rDev +11.1%
vibe: 4.75 | quality: 4.75 | service: 4.25 | selection: 4.5 | food: 5
Stopped by for a quick lunch during a recent trip; I was really impressed. Located on the second floor, this is a German Beerhall type of venue with a bright and airy room filled with long communal tables. There is a moderate sized bar and some tables by the second floor windows that overlook bustling King Street.

In addition to great service and vibe, their beer selection (20 taps) was spectacular: plenty of choices with a good array of styles; I quaffed a fresh Paulaner Helles and two beers from Left Field Brewing: one being a delicious saisson, the other a wonderful cask IPA. One unique item to note: they have a list next to the bar noting times when the lines are cleaned. Never saw this before. Good job. Now to the food, which consists of some of the tastiest sausages known to man (well, this man, anyway). Do you fancy a rabbit sausage? How about some kangaroo? Or even a vegan sausage? They have it and they are fresh and delicious. I went for the German styles along with some savory duck fat frites with two choices of dips.

Definitely a place to check out. You sure cannot do wurst.

Reviewed by dsnyds25 from Canada (ON)

Despite the wide variety of interests, everyone seemed to enjoy the vibe of the place. There was a good buzz in the room (pun sort of intended), and as long as you could find seating, it's a great place to sit, chat, eat, and drink.

The food is fantastic. It's fun, unique, and delicious. The duck fat fries are a must and the sausages we tasted were as good as advertised.

The beer list is impressive - a number of Cdn and Ont craft beers, and a good selection from around the world. Agree with the previous poster that the chalkboard of draft beers needs to have the beer style listed - a buddy of mine went up to buy a round and unknowingly came back with the smoke beer for everyone! Though it wasn't universally enjoyed, it did get drunk, and it was a great opportunity to engage in a little beer tasting 101 (e.g. describing that smoked ham flavour).

Service was relaxed, attentive, and prompt.

The only off-putting part of WVRST, and my only complaint, is the markup on some of the bottled selections. Some of the better selections from Quebec and around the world were priced 2.5 - 3 times what you would pay in the LCBO (though they aren't always available there). But, I guess wine suffers the same fate in any other restaurant, so why should beer be any different?

However, overall, WVRST is a place to which I would easily return.

Number of taps is nothing earth-shattering but he quality is very good. The bartenders are always knowledgeable and friendly as well.

Atmosphere is really good. Lots of room and clean. Food is also really good, as long as you are in the mood for a hot dog/sausage.

My one complaint is the chalkboard/beer menu that lists the brewery and not the actual beer/style, which is extremely frustrating when you are trying to make up your mind. Would also save the bartenders a lot of time if they gave more details on the beer list.

3.84/5  rDev -7%
vibe: 4 | quality: 3.5 | service: 4 | selection: 4
A welcome and warm addition to the Toronto scene, and being close to Bathurst within a reasonable drive for me. A nice revitalizing area. Unusual to walk up to the second floor, yet the atmosphere there is efficient, clean and very pleasant. Staff is most friendly, and were knowledgeable and straightforward about what the beers were about. Prices were reasonable by Toronto standards. Many taps dedicated to Ontario craft, and the allocation to European beers were differentiated from the standard macros. Decent and different bottle selection, and improving with an association for events with the BarVolo crew.
Jun 15, 2012

Atmosphere: sleek modern beer hall, vibrant colours, barebones layout with tons of seating, clearly visible tap list and lots of branded glassware on display. I like how they post when the draught lines were last cleaned.

Service: had to wait a while for our first round but eventually the bartender picked up the pace. Patrons are friendly as several people gave us their tokens for a Leafs ticket raffle that was going on by the bar.

Selection: solid mix of Ontario micros and European lagers on draught and a small but respectable bottle list that includes LCBO standouts and direct-from-brewery offerings (like Church Key Barley Legal). I had a Dieu du Ciel! Rosée D'hibiscus on tap and a can of Central City Red Racer IPA; my girl enjoyed her pints of Stiegl and Pilsner Urquell.

Food: delicious sausages with wacky toppings and dipping sauces are the main attraction here. We shared the Bratwvrst with Dirty Duck Fat Fries and Jimi's Sweet Chili sauce, everything tasted awesome. Prices are steep but worth it.

Overall: WVRST offers high quality homemade sausages and an impressive range of craft beers in a fun and approachable beer hall environment. The selection keeps improving and they're now hosting Beer Schools, so I think the best is yet to come from this place. It's a great option for beer geeks and foodies alike, and I'll gladly return when I find myself on King West. Check it out.

Reviewed by BGDrock from Canada (ON)

3.78/5  rDev -8.5%
vibe: 4 | quality: 4 | service: 3.5 | selection: 4 | food: 3
In the style of a beer hall, this place is fantastic - long wooden tables and dim lighting, be sure to bring your friends as long as they are open to something a little different! It serves only sausage and frites for food (vegetarians need not apply), but they aren't your standard stuff: your looking at 15 or so types of sausage including kangaroo and duck (as well as some normal stuff), and you have the option of fries cooked in duck fat as well as 10 very interesting dips to accompany them.

And the beer of course - again not a standard selection; you can expect 30 or more, half bottles, half draft, that are a mix of European and Canadian origin (and a few American). You'll also find a few limited release brews - for example they had one of Beau's Wild Oats Series (Hogan's Goat).