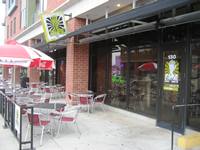 Reviewed by fooferjw from Florida

Rated by YodersBeerEmporium from Iowa

Rated by mnredsoxfan69 from Minnesota

Rated by bufante from Iowa

Reviewed by bismarksays from Iowa

2.76/5  rDev -31.9%
vibe: 2.5 | quality: 3 | service: 1.5 | selection: 3.75 | food: 3
My visit was "post lunch rush" but it still took an hour to be seated. Maybe the inside is cool, but I will never know as we we told that we had to wait outside and could not look around. There was ample seating outside and over half the tables were empty. After the two groups that arrived before us were seated, my party of three figured we were up next. Nope. Instead the party of four and the party of six after us were called next. I went to ask if they had missed us and was told that we were up next. Great. We were then seated...and fifteen minutes later we got a waiter who did not bring drink menus.
I would go on about their service issues, but do I have to? Burgers were smallish but tasted okay, but were missing ingredients listed on the menu. Fries were cold and flavorless. We didn't get a beer menu until our food was brought to us and our waiter never returned before that until check time.
We had come to Des Moines for Zombie Burger. Next time, I will go to the Hessen House or Fongs instead.

Reviewed by errantnight from District of Columbia

The restaurant side is brightly lit and open, it works as a bit of a fun gimmick and place to throw down 4000 calories in a meal with some great craft beer (and while I've noted prices as reasonable above, and they are, their bottle list would qualify as cheap/inexpensive), it's not exactly a place you're going to want to hang out in for a lengthy period of time (nor do they want you to, as there's always a line).

So the beer...they had a dozen odd tap selections, with a mix of intriguing, standbys, and a few that won't attract your interest, supported by a fairly lengthy bottle list with some superb selections. You won't have to look hard to find something you want. It might not stand up to a night of drinking, but you're here for the combination of food and good drink, not for a night of drinking.

Reviewed by ALC82 from Iowa

4.2/5  rDev +3.7%
vibe: 4 | quality: 4 | service: 3.75 | selection: 4.75 | food: 4.75
This place is a great idea / concept for any college town! They offer all types of "off the wall" zombie themed burgers. Don't be one to count your calories if you are heading here as everything is Full Flavored w/out taking any short cuts to reach their goal. One of the burgers I tried was 2 Grilled cheese sandwiches w/ burgers and mozz. sticks in between! The also offer milk shakes spiked w/ liquor... definitely worth a stop if in the area!
Dec 13, 2013
Rated: 4.25 by zowie from Iowa

Reviewed by Catlin from Iowa

The beer selection is really pretty good. When I was there they had a founders tap take over.

And what goes great with a great beer. Burgers. And they have a hell of a selection of burgers.

If you want something a little different with your beer head here.

Reviewed by Monkeyknife from Missouri

The concept of a zombie-themed burger joint was so interesting, that we just had to try it. The place was what I would describe as more "hipsterish" than "gothic" which I kind of expected. Still, it had zombie posters on the walls and ceiling but not full-blown.

Service was good with additional explanations on any food and a good grasp of the beer world.

The beer list was quite extensive full list all styles from Lagers, IPAs, and Stouts to Barleywines and Sours. I'm an IPA guy and had a Stone Ruination, Epic Hop Zombie, and Founders Reds Rye.

The burgers I would consider gourmet. They have everything from simple cheeseburgers to burgers I never seen. I had The Trailer Trash Zombie burger with American cheese, fried pickle, chicken fried bacon, cheese curds, and ranch dressing. Incredible...I had to loosen my belt after that one.

Prices for food and beer line up with most places I frequent. A definite visit the next time I'm up there.

I mentioned in my review of El Bait Shop that *it* was my only 'must' visit beer stop on my recent Des Moines visit; let me retract that statement because Zombie Burger + Drink Lab was the *other* place on that very short list. As an unabashed fan of 'The Walking Dead' and other things zombie-related, yeah, I had to go here. Without much arm-twisting, I convinced my traveling coworker to visit for lunch after a successful meeting at a nearby firm. ZB holds down the ground floor of a newish condo building, and has a spacious patio and separate entrances for dine-in and take-out. Windows are adorned with cool neon signs (I particularly like the obese brain-eater in the "Des Moines: Hell Yes." shirt); inside is more zombie-themed mayhem with graphic novel-styled artwork, quirky props (like the blood-smeared 'In Case of Attack' glass case with hatchet cutout) and rough materials like steel studs and chainlink fencing for accents. Sure, it's pretty kitschy - but fun, too.

On a Wednesday at lunch they were reasonably busy, but there was no line to contend with. We grabbed two seats toward the end of the long bar; I missed our server's name but she was good, plenty patient as we lingered over the menu and contemplated drinks. The menu is a faux newspaper 'The Villager' on one side, with plenty of cleverly written zombie blurbs; on the flipside are listed two dozen burgers with plenty of apps, topped fries, rippers (deep fried hot dogs), soylent greens (salads) and brain freezes (shakes, both virgin and spiked). There are about a dozen beer taps and at least 100 bottles, so plenty of options. The previous week had been a Founders 'Tap Takeover' and most of the lineup lingered on to the following week. Since there were no other draft options (I wanted another Toppling Goliath, honestly) I picked the always good Centennial IPA.

An earlier review mentioned the 'Undead Elvis' burger (peanut butter, fried banana, bacon, egg, cheese), so maybe that was stuck in my brain; as much as the other ones sounded interesting (Flamethrower, Dead Moines, Planet Terror, Raygun, Juan of the Dead and so on...), I went with my gut. OH MAN, that was a great burger - the peanut butter/bacon/banana/beef combo is outstanding (despite the fact that it may sound gross)! My coworker chose the La Horde (bacon, goat cheese and caramelized onion) and liked it a lot. We tried in vain to put a dent in the Fry Basket, but it was simply too much.

I'd have loved to have gone for more than just a lunch, but time was limited. Suffice to say, it's a cool place for both the living and the undead, with really good artery-clogging food and a very solid beer list. Check your pulse at the door... but know that your wallet is safe: a hearty lunch for 2, with a pint each, was under $25.

Reviewed by DesMoinesMike from Iowa

4.3/5  rDev +6.2%
vibe: 4.5 | quality: 4.5 | service: 4.5 | selection: 3.5 | food: 5
After hearing about this place for months we decided to take family that was visiting from Omaha. This place is a blast. All of the food items are zombie/horror movie themed. I had the Undead Elvis burger, with bacon, egg, peanut butter, and fried banana. 3 hours later I can still taste it. The beer menu was decent. I HAD to have the Dead Guy, which is on tap. The bar tenders were beer geeks and knowledgeable about what was on hand and were happy to answer questions. It's the only place in town I know of that serves crystal head vodka, and I was happy to try some.

I was happy to visit and plan to do so many more times.

Reviewed by Ave from Iowa

4.1/5  rDev +1.2%
vibe: 5 | quality: 4.5 | service: 3 | selection: 4 | food: 5
Zombie Burger + Drink Lab does not have the biggest total selection, but beer for beer possibly the best in town. Aside from obligatory domestics, they have 4 or 5 bottles from each style that covers a lot of ground very well. Ales, Belgians, IPAs, Bocks, Stouts, Witts, Lambics (needs some work, but whose list doesn't?) Browns, & even some solid Pils/Lager choices. It's not El Bait Shop where they are going to put everything possible up, but for a 75+ beer list its impressive. ZB+DL's beer list seems intended to give you the best of each style from around the world in 80 beers of less. Despite being open not even a month now, they have already been rotating some seasonal: Saisons, Oktoberfest, & I'm told stouts are on the way. The glassware does not live up to beer geek standards, but isn't offensive to them either. There are not enough taps (6) but three of them rotate regularly & only one of them is a dedicated macro.

The place is in fact a Zombie themed burger joint, so the atmosphere is pretty fantastic. Since they've opened its been stupid busy so there is usually a line, timing is everything in when you go. Hopefully this calms down somewhat. The food is "Stupid Good". The chef is the same who has opened Centro & Django in town, both of which have won many local & national food awards, so you know there is foodie cred in the house. This is his first beer centered bar though so we will see if his past experience translates. But that said.. the food.. yeah.. amazing.