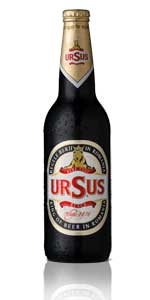 Notes:
View: Beers
Reviews: 8 | Ratings: 47 | Log in to view all ratings and sort
Reviews by arkanu:

Almost black, ruby edges. Beige, creamy foam. Very beautiful.
Not too intense smell, but whit toasted malt and caramel well noticeable.
Same notes at the taste, stronger and more intense. Malt, caramel, toaste, liquorice, and a bit of bitterness.
The liquorice is longstanding in the mouth and aftertaste, not tiring, but rather giving the beer a good drinkability.
Overall, much more elegant and refined that expected.
Good surprise.

Maybe a bit too big and sweet but the roast takes a stab at balance. Again, hides the ABV like these other Romanians. Very much black, not brown.

Served in Sigishoara probably poured from a bottle.

Smell of nut possibly chestnut but not much else, faint nose a bit weak.

Tastes like an average typical brown ale of sorts, not hoppy some malt perhaps on the palate, a bit too wet for my tastes in mouthfeel though. It is a pleasant taste, there is no excessive alcohol or anything unpleasant but some. It is very macro like tasting.

Easy drinking if that is your thing.

Very dark color with hints of chocolate. Nose cellar, maturation of coffee with juice lightly safety. In the first mouth, we fix some coffee but the body in general, is far from being bitter and there is easily drinkable, with just a little bitterness in the finish notable. Lacks a bit of flavor but nice to drink.

Can't wait to have this beer again!

SAB Miller / Ursus. "100% Malt" - whatever the fuck kind of marketing jargon that is supposed to be; I guess there's no water, hops, or yeast in this can - it's just entirely malt. .5 litre can acquired at a Shop and Go supermarket in Bucharest and served into an unbranded bierkrug in me friend's gaff there. 15 degrees plato. 6.0% ABV. The label is sleek and attractive.

Served cold and side-poured with standard vigor as no carbonation issues are anticipated.

HEAD: Pours a two finger wide head of khaki colour. Nice thickness and creaminess. Decent complexion and consistency. No lacing sticks to the sides of the glass as the head recedes. Retention is below average - just over 1 minute.

BODY: Opaque dark black - but not the solid jet black of something like an imperial stout. It's that weak almost watery look common in schwarzbiere. I've never been a fan of this kind of body. No yeast particulate or hop sediment is visible, but the beer is so dark I doubt I'd see either if they were there.

Overall, it's an average look for a schwarzbier. Can't say it's unique or special, but there are no egregious flaws. Generally appealing, I suppose.

I'm not finding any yeasty notes or hop character. Overall, it's a pleasant aroma of mild strength and boasts more complexity than I anticipated given this is a SAB Miller brew.

No alcohol or off-notes are detectable.

TASTE: The herbal bitterness is off-putting and the fennel/anise in particular evokes a root-y flavour I find deplorable. Dark malts and black malts provide the simple foundation. I'm not finding the cream or roast I'd love, but it does have some weak burnt character - including burnt bread and burnt sugars. Sarsaparilla/sassafras and root beer notes do make an appearance, but seem weak and insufficient. Caramel. Some faint chocolate malt.

This is a mess of a beer in terms of (im)balance, but there are some interesting elements in play. It's unnecessarily complicated, lacking refined intricacy and even a clear focus. Anything but gestalt, this scattered flavour profile feels like a haphazard mix of random flavours, none of which coalesce to form any sort of cohesive whole.

Amplitude of flavour is poor, as is depth of flavour. Average duration and intensity of flavour.

TEXTURE: Not as creamy as would be ideal, but it's smooth and wet in a slick sort of way. Unrefreshing. Medium-bodied. I always struggle with this kind of texture in a shwarzbier - it's light and watery, which lends it a weak presence on the palate. Strangely thin, lacking sufficient heft or weight to really support the darker flavours here. Overcarbonated to boot.

OVERALL: This is an interestingly chaotic beer with plenty of flaws, but it does seem inspired and clearly the brewers are going for something. That's more than I can say about many of the beers on the Romanian market, and for a macrobrewery's dark beer, it's not bad. That said, I'd caution friends from buying it, and frankly I prefer the more neutral macroswill lagers from this brewery to this root-riddled mess. I dig the price point, but the beer needs work.

This is one of the few professionally brewed beers in Romania.

The pour is actually impressive, nice dark aspect, pretty good smell.
The first taste is refreshing, interesting, somewhere between a dark beer, and a stong lager. You get small hints of sweetness in it also.
The aftertaste however is surprisingly bitter, and totally out of touch with the rest of the aromas.
That aftertaste really reduces the drinkability, leaves you a little confused.
It surely has a stronger and more refined taste than the Silva Black, but that aftertaste really does harm to the overall review.