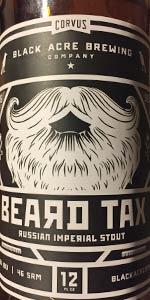 M - Silky and full bodied with little to no carbonation.

O - This is a very flavorful Imperial Stout and definitely worth a try.

12oz undated can poured into a Spiegelau stout glass at fridge temp 9.8% ABV 60 IBU 46 SRM per can label. The beer pours dense thick black evocative of motor oil with minimal mocha brown head. The head recedes to a fat ring of big bubbles. There are a few spots of lacing. The aroma is faint with roasted malt, bittersweet chocolate and coffee. The taste is semisweet chocolate and caramel initially rolling into an ashy & hefty roasted malt driven bitterness. As it warms there is a smokey element. The mouthfeel is very full bodied with minimal carbonation and a semi dry finish. There is a lot of residual sugar here but it's balanced by the substantial roasty bitterness. Overall, very good. Having had this beer and the barrel aged version, I believe this beer is brewed with the intent to barrel age. Enjoyable, but not very complex.

Welcome back to my CANtinuing Happy New CANned Beers From @jkblr Sunday (Week 725)! I have not been doing much trading of beers lately & I stopped purchasing through Tavour since a) I have amassed QUITE a backlog & b) there is SO much available locally that I don't feel CANpelled to trade. @tone77 was by over the holidays to do a drop-off & pick-up + a nice package arrived from @jkblr the other day with his beers being my focus today.

From the CAN: "In 1698, Emperor Peter I of Russia instituted a Beard Tax to bring Russian society in line with western European models. To enforce the ban on beards, the tsar empowered police to forcibly and publicly shave those who refused to pay the tax."; "The Beard Tax has been taken"; "A superfluous burden"; "Quite suitable for aging"; "For the good of the public * With liberty and beer for all"; "Refresh & Recycle".

Ooh, an RIS in a CAN! I remember people being aghast when Oskar Blues' TenFidy hit the market in CANs & I just smiled, knowing that it was only the tip of the CANburg. It isn't a common ocCANurrance, but it is a pleasant surprise to receive one.

I beCAN with a Crack! of the vent, followed by a C-Line Glug. It was not overly carbonated so I allowed it to run pretty freely into my awaiting glass. It briefly formed just under a finger of foamy, rocky, deep-tan/light-brown head which quickly fell away to wisps. Color was Black/Opaque (SRM = 44), allowing ZERO light penetration. Nose was rich and chocolaty, like a liquefied fudge brownie, with hints of charcoal, smoke, caramel & treacle. Mmm. Mouthfeel was thick & chewy, not very carbonated, so it sat on my tongue like a dollop had been placed there, slowly warming. Man, it really came alive as it warmed! The dark chocolatiness really intensified as the heat of the alcohol began to assert itself. This was no playin' around! The onslaught of tastes ranged from sweet-ish caramel to smoky to bitter, like baker's chocolate & treacle for the latter. Catherine the Great would undoubtedly have been excited to find this in her glass! Finish was semi-dry & it led me to wonder what aging might do to/for it. I would wager that it would dampen the heat while mellowing some of the sharpness. If you undertake the aging process, report back. I'd be curious.

Appearance: Arrives at the bar black as used motor oil with a one inch tan head that leaves a few slivers of lace

Taste: Dark chocolate with moderate roast forward with coffee and nut flavors building; the hops arrive, adding bitterness through the middle and linger into the finish, which is nicely balanced between the malt and hop elements

A really excellent local Indiana RIS that I wish was year-round instead of a limited winter seasonal. Beard Tax has an uncommon depth, with nuances that emerge as it warms while sipping. Upon pouring, the initial impression is a blend of nutty, earthy coffee and bitter dark chocolate. The bitter hop character is a prominent component of the beer as a whole, so I'm inclined to guess that this will be better enjoyed fresh, though I have yet to try it aged. As it warms, the roasted malts start to emerge, giving occasional hints of peanut butter and fudge. A real pleasure.

Look: pitch black with an off-white head and a lingering lacing

Smell: straight chocolate, cocao powder and nibs. Very slight roasted notes and some sweetness that offsets the bitterness on the nose

Taste: soft chocolate notes of the whole spectrum, milk chocolate, semi-sweet, and dark. A few other notes of roasted toffee and coffee. Some sweetness to help offset the soft bitterness that sticks around. Very light heat from the abv

Feel: soft and silky and not too thick

Overall: great example of an imperial stout. Easy drinking and full of flavor