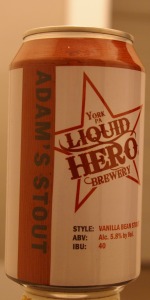 Notes: Vanilla stout that starts off by combining our favorite dark and roasty malts and then aging with vanilla beans in the tank. Medium body with hints of coffee and caramel with a subtle vanilla finish. Named after an old homebrewer friend, Adam’s Stout is great for sipping anytime.
View: Beers | Place Reviews
Reviews: 11 | Ratings: 77 | Log in to view all ratings and sort
Reviews by Durandal_777:

Roast coffee notes. Not much else. Not getting any vanilla (or chocolate notes for that matter. Very mild hoppiness/bitterness.

Inoffensive, but not much else.

I have been slacking where The CANQuest ™ is CANcerned, reducing and eradicating my interminable bottle backlog, but I am now rededicated to the real mission, which is to review EVERY CANned beer in existence. I love the guys at Liquid Hero and have even been over to visit their digs in York, PA. When they began CANning, they knew of my affinity for beer in metal cylinders and began bringing me some at various events. Things bogged down while awaiting picture approval, but now, all is in readiness.

From the CAN: “When we were brewing in our garage, Adam was our very first Brew Pal; helping us brew beer on several occasions. Once, he asked if we could brew a stout. So we did and shared it with him and we simply named it Adam’s Stout. The recipe has changed since then, but the name stayed the same! Cheers! [undersigned] Matt [,] Josh & Christian”.

There are so many things that I love about CANned beers, BPA be damned! One is the auditory nature of the Crack!, usually followed by the visual of looking into a brimful CANtainer, proceeded by an inverted Glug, resulting in a pseudo-cascade. This one had all of the above! The three-plus fingers of dense, deep-tan showed no signs of letting up, so I took a diacetyl rest and surfed the ‘net while waiting for it to fall. At last! But look at all of that sticky lacing it left behind! Who is going to clean that up? Adam had better plan on coming by, since it was his beer to begin with. Color was Opaque Black (SRM = 44), allowing zero light penetration. Nose was very roasty and smoky, but I was not really smelling much in the way of vanilla. Mouthfeel was full and creamy. The taste was not as bitter and charcoal as I girded myself for, based on the nose. Instead, it had more of a coffee ice cream flavor. I like coffee ice cream, so there was no problem in terms of taste. However, if you were expecting a vanilla-driven experience, you would be in for a letdown. Finish was dry, smoky, slightly bitter, but definitely a stout.

Appearance: Pours a translucent fudge brown color and a hard pour builds only half an inch of foam; nice, spotty lacing, though

Taste: Light roast and chocolate, up front, with coffee tones developing; a touch acrid, after the swallow with a hint of vanilla appearing, in the finish

Mouthfeel: Light to medium body with low to moderate carbonation

Overall: Despite some of the previous rating disappointments, I rather enjoyed this beer; a nice one for watching March Madness

Thanks, BerBen, for the opportunity

Looks great, very dark, moderately thick. Too much vanilla, nothing subtle about it. It is as advertised. Just not to my taste.

This looks more like a porter than a stout; hopefully I am not being too picky about that. Taste has some nice roasted tones. Very mild malt sweetness. Vanilla tones too. Decent enough, I guess. Kind of uninspiring.

Review from notes taken a few months ago. On tap at Als served in a pint. The brew appears black in color with a thin tan film that leaves stringy fingers of lace on the glass. Some brown clarity is seen around the edges.

The smell includes notes of vanilla and roast. A bit earthen with muted notes of chocolate.

The taste is earthen with a minor herbal hop flvoring. Some minerals and citrus with stale coffee. A bit of vanilla is faintly noticed into the aftertaste.

This is a medium to lighter bodied brew with a moderate to low level of carbonation. It is overall not terrible but it really is quite lackluster and forgetable.

First had: on tap at Liquid Hero

Dark brown-black pour, with a small tan head that sank to a ringlet. Nice nose, plenty of vanilla, with a dark malt roastiness. Strangely, the taste didn't quite live up to the aroma. The vanilla seemed less pronounced, standard roasty malts, with a fair amount of bitterness in the finish. Body was medium, maybe a bit on the thin side for a stout, but still robust enough to be enjoyable.