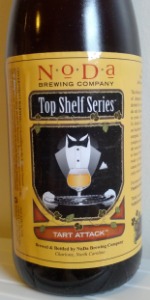 Notes: This Berliner Weisse style sour ale is full of character and flavor at only 4.3% alcohol by volume. We sour mashed this ale and allowed the souring lactobacillus to create a lovely tart and bright flavor. To further the tart character, we rested it on blackberries after its fermentation was complete. The result is a bright and complex tart ale with both semisweet and dry notes throughout. This ale was brewed to honor Pints for Prostates and all their work in bringing awareness to prostate cancer. So men... get tested, live longer and enjoy more craft beer!
View: More Beers | Place Reviews
Recent ratings and reviews. | Log in to view more ratings + sorting options.
Rated: 4.13 by Run4theRoses from South Carolina

3.75/5  rDev -1.3%
A cool Berliner type, more malty than others and it shows in the color. Fizzy head and feel keeps it appropriately light with its low abv too. Really drinkable, less sour than it is just a little puckery. A mouthwatering beer that has some fruity notes beyond the usual lacto lemon finish they style often produces. Pear and even peach come to mind from the smell and taste. Finish is dry for a split second before the pucker comes rushing back. A very cool palate experience. Seems like everyone wants to make sour beer these days, and this is a logical style to start with. I like how different it is, but it lacks the depth and overall quality of the best in the game.
Sep 17, 2014
Rated: 3.75 by HopDropTheElder from North Carolina

4.04/5  rDev +6.3%
look: 4 | smell: 3.75 | taste: 4.25 | feel: 4 | overall: 4
A: Pours a clear rosé/champagne in color with a moderate amount of fine active visible carbonation rising from the bottom of the glass rather quickly and some faint peach highlights. The beer has a half finger tall fizzy white head that reduces to a mottled very thin film covering the entire surface of the beer and a medium thick ring at the edges of the glass. Minimal amounts of lacing are observed.

S: Light to moderate aromas of citrus/lemon zest, light fruit/green apple, and lacto sourness over the top of very light aromas of wheat.

T: Upfront there is a very light flavor of slightly sour wheat with a light flavor of black raspberries/blackberries. That is followed by a light to moderate flavor of citrus/lemon zest and light fruit/green apple. Finally there is a light amount of lacto sourness that is very subtle but present.

O: Very refreshing and super easy to drink - extremely enjoyable on this hot muggy summer evening. I wish there was a slightly stronger presence of blackberries/black raspberries but this was a great beer and I would gladly grab another if I could find it. Sessionable.

Tart attacks are the leading cause of death among the non-sour-inclined (sour-declined?). Anyway, this stuff pours a cloudy sunset straw topped by a finger of relatively short-lived white foam. The nose comprises lemon zest, lacto sour, light cracked wheat, and a touch of green apple. The taste brings in more of the same, now with some berries, though I'm getting more of a tart blue raspberry thing instead of blackberry. Tartness is in nice effect, not too much puckering, but it's definitely obvious. The body is a hefty light, with a light moderate carbonation and a dry, sticky finish. Overall, a very nice Berliner, though I think I would have liked to see some more blackberry action. That said, I'd drink this stuff again without hesitation.

Taste: Lactic sourness mingles with the green apple and berry tones; the wheat bread flavor persists, underneath; the finish is rather watery

Overall: A bit limited in the flavor department, but still quite refreshing

S-The aroma is lacto-tart. There is a graininess to it as well. Quite wheaty. Not picking up much blackberry influence here which is quite disappointing. It's mostly a combo of dried wheat and lactic tartness.

T-The flavor is again, prominently lacto tartness. The wheat is also very important to the flavor profile. I really wanted more blackberry. It gets fruitier as it warms and it's clearly tart but I don't get much authentic blackberry flavor. Cereal and sour milk (somehow a compliment). Gets better and fruitier as it warms.

M-Has more body than I was expecting; it is still light, though. Bubbles are very prickly and numerous. Quite quaffable.

O/D-If I didn't know that this beer rested on blackberries I would have liked it more. The blackberry addition has been a negative for me. I want more blackberry. If I was told this was a straightforward Berliner I would probably give it a higher grade. Yet, when you add an excellent fruit to a beer, I need to taste said fruit or else it was not as much of a success.

Reviewed by inlimbo77 from Delaware

S: Some fruit. Some lactic. Kind of disappointing. Cereal grains.

T: Cereal grains. Some lactic tartness. Not getting tons of fruit. Really simple. Finish is dry.