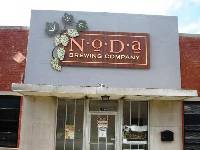 Reviewed by GehenHerzog from North Carolina

4.56/5  rDev +5.6%
vibe: 5 | quality: 4.5 | service: 4.5 | selection: 4.5
Showed up to NoDa Brewing for their Grand Opening. Place was absolutely packed. Not sure they expected that many people but I was pleasantly surprised at the amount of people who showed up.

The bar area has a good amount of seating and the rest of the building has plenty of seating as well. As you drink you are able to view a lot of the brewery. It is also very well lit. Tried the CocoLoco and NoDaRyez'd and both were great. The service lagged just a little bit but I really didn't expect anything different. They really did better than expected with the amount of people they had to serve. Very impressed with this place and will definitely be making multiple trips back there. Can't wait til more of those Snifters are delivered because I will be purchasing multiple. Cant wait til they start experimenting more like I have read.

A great addition to the Charlotte craft beer scene

Rated by CMGNC from North Carolina

4.54/5  rDev +5.1%
vibe: 4.25 | quality: 4.5 | service: 4.5 | selection: 4.75
I stopped by NoDa Brewing on 7/26/18. Since I was visiting Charlotte, I wanted to try some local beer. I got their early, but there were already some people there. It appeared that they had about 20 beers on it. They also offered 4 packs and a couple different bottle to go. The bartender was very helpful with my beer selection. The brewery has a pretty decent sized taproom, and plenty of outdoor seating as well. I tried the Good Will Hopping, and picked up a 4 pack of Hop Drop and Roll. I hope to make it back again.
Jul 27, 2018
Rated: 4.58 by ChrisCharles from North Carolina

3.78/5  rDev -12.5%
vibe: 3.5 | quality: 3.5 | service: 4 | selection: 4
We stopped at NoDa's North Tryon Street location about opening time (noon) on a holiday weekend Saturday. The taproom itself is pretty good sized, and nice enough; there is a good bit of seating outside as well, which was really nice as it was a beautiful day. Parking was also plentiful, which is not the case at every taproom in Charlotte.

Since we arrived at opening, there were not a lot of people there, but that was not the case within half an hour. By the time we had been there an hour, the taproom was about fully seated (as was the outside seating area), and there were moderate lines for beer, but the place was not really crowded. Two things that one readily notes sitting outside are the play area and the numerous dog bowls of water; this venue is definitely both dog- and kid-friendly, and as it filled up it became obvious that a lot of patrons chose to come here with that in mind. The clientele was quite varied, but definitely featured a lot of families with kids and a number of dog-lovers.

There were about 24 beers on tap when we visited, most of which were NoDa beers, but there were a few guest taps too (including a kombucha tea and a cider). Flights of four generous pours were available, but not all beers were eligible (most ineligibles were high-gravity beers), which is not a policy that I am fond of. The flight pours were provided in straight-walled glasses (think beer-fest) and most regular pours seemed to be in shaker pints, which definitely leaves something to be desired; there were multiple pour options for most of the beers (half-pints and pints). The beers that I tried- Hot Pistol (American Stout), OG Kolsch, Hop Experiment #9 Citra (Session APA), and If You Don't Know, Now You Know (IPA), ranged from decent (Hot Pistol) to good (If You Don't Know) in the order listed.

Food was provided by a food truck from TIN Kitchen, which I understand is currently a seven-day-a-week engagement (though times vary weekday vs. weekend). The food truck menu featured tacos, quesadillas and sliders; the Chipotle Chicken and Jerk Pork quesadillas were both quite good, particularly with a half-pint of Bandito, which is a solid American Pale Lager.

If I'm honest, while Hop Drop 'N Roll is a great IPA, nothing I've ever had from NoDa has blown me away, and I find most of their beers to be decent-to-good; my visit to their taproom did not change this opinion. In a city where there is fantastic beer to be had, a nice venue is not enough to pull me back on a regular basis.

4.49/5  rDev +3.9%
vibe: 4 | quality: 4.25 | service: 5 | selection: 4.5
North Tryon (new location)
Off by itself on the edge of NODA, so there's plenty of parking, a nice covered beer garden, games, water for dogs. Food truck. TV's inside.
Service was attentive. A few cans and growlers for sale.
Clean bathrooms. NODA glasses and stuff for sale. Eclectic pop music.
Pretty extensive tap list, mostly NODA, one kombucha and one non-alcoholic cider.
Not missing a trick imho.

Reviewed by Driver8rws from Ohio

Rated by aleman21 from North Carolina