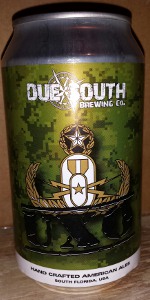 
M: medium not too sticky it's not bad


O: it's a pretty good beer but it really doesn't distinguish itself

Received as an extra in a trade and poured into my Duvel tulip. Oddly enough my can states this is an imperial red/amber ale...

T - Taste is similar to the nose, alcohol, caramel malts, light candy, old english hops. Odd, has certain barleywine like characteristics but its rather messy. Messy and dirty/old.

M - Mouthfeel is a bit heavy, but oddly enough the booze feel is hidden. Not bad.

O - Overall I'm not sure what to make of this one. The can states imperial red/amber ale (which if so this is a poor example of) , and the web states this is a strong ale. Either way, the malts were too forward in this beer. Not a huge fan, but, not a drain pour.

I got a growler of this about two months ago but was unable to drink this until now. Pop the cap off the growler and this one is still pretty fresh. Pours a beautiful ruby color with a slightly off-white colored head about one finger in size. Plenty of lacing down the sides of the glass.

I am battling a bit of a seasonal-allergies-stuffy-nose but I still get good aromas from this. Alcohol, english hops, caramel, fresh baked bread. I think this is actually an English Barleywine. Earthy hops, floral with very little citrus.

Really nice flavor. Kind of reminds me of Bigfoot. Alcohol is present in taste but not feel. The beer isn't hot, however, very smooth. Chocolate and caramel with a bit of oakiness up front, followed by a solid bite of hop bitterness. Some caramel protrudes with pineapple and pear flavors.

Overall, a pretty solid beer. Barleywines aren't my favorite style, but I enjoy one every now and then. Another solid offering from Due South. These guys are making good stuff these days

UXO American Strong Ale from Due South Brewing Co.
Beer rating: 86 out of 100 with 47 ratings