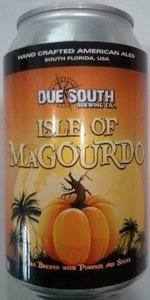 Notes: Isle of MaGourdo is a pumpkin ale brewed specially for the fall season. Years ago our Brewmaster Mike went tuna fishing in Islamorada with Bo, Bryan and a great man named Martin. This beer is brewed each year the same time as that trip. For Martin – we miss you buddy.
View: Beers | Place Reviews
Reviews: 16 | Ratings: 80 | Log in to view all ratings and sort

there is a canned on date on the bottom of the can. The pour is similar to the color of a copper penny. I'm getting a faint amount of pumpkin on the aroma. On the taste i'm getting a sour pumpkin taste with a faint amount of spices. This is a forgettable pumpkin ale & not one that I would go & seek out again. Cheers! C

Pours a dark hazy and copper. Strong pumpkin notes off the nose with more subtle spices. Tasting of a more natural pumpkin flavor as well as a slightly metallic aftertaste.

O: Pretty good pumpkin beer. Hazy great lacing, a decent nose and great pumpkin flavor, what more could you ask for in a fall beer?

Bad idea to can this beer, should be bottled, canning imparts a negative flavor to this beer, and muddies the water so to speak. Don't waste your time here move along. I've tried just about every pumpkin brew on the market and this may be the worst. Southern tier pumking, cigar city good gourd, and samuel adams 20lbs of pumpkin being the three best.

Brown in color with a murky complexion. There's a quarter inch of tan resting on top. I smell pumpkin pie spice and nutmeg. The taste is very subdued in comparison to the nose. I'm getting some pumpkin pie spice, but it is faint. The mouth is very dry and moderately carbonated.

A: The beer is hazy dark orange amber in color. It poured with a quarter finger high tan head that died down, leaving a collar around the edge of the glass and a large patch of bubbles in the center.
S: Light to moderate aromas of pumpkins and pumpkin spices are present in the nose—among the spices cinnamon and nutmeg seem to stand out in particular along with some hints of ginger.
T: The taste is similar to the smell, except that there are more flavors of pumpkin pie spices and less in the way of pumpkins. No sweetness is perceptible.
M: It feels medium-bodied on the palate and has a moderate amount of carbonation.
O: This pumpkin ale is dominated by flavors of pumpkin spices so if you're looking for something that isn't sweet this could make for a good accompaniment to a meal during the autumn months.

L: Dark, toasted almond brown with no head.
S: Spice - cloves, pumpkin flesh, some cinnamon. Not getting any nutmeg. Not complex, but not the most one-note smelling pumpkin beer either.
T: Holy cinnamon and cloves, Batman! Cinnamon is MUCH stronger than I anticipated from the smell. It's all I can taste, actually. Maybe this beer needs time to mellow out a bit? Canned 9/25/15, drank 10/13/15.
F: Not grainy at all, but I feel like I just licked a cinnamon stick. Dry tingliness on the tongue and in the throat.
O: I feel bad, this could probably be a tasty beer with some time, it's just pretty overwhelming as it is now.

Received as an extra in a trade. Got lost in the fridge...oops.

A - Poured into my Duvel tulip a crystal clear dark chestnut hue with a thin one finger head that fades slowly to leave thin lacing and a light blanket.

T - Taste is similar to the nose. Nice spice notes, decent cloves and ginger. The pumpkin is solid too, vegative. There is something on the finish though, the aftertaste, that is slightly metallic.

O - Overall this was a solid pumpkin beer. Certainly should have had it fresher but I'm glad it still drank pretty good. Solid.

It does my heart good to hear that my last hand-off to tone77 before he departed is serving him well! I am even happier to be getting in some CANQuest (tm) time as I CANtinue to whittle away at the insidious backlog here, especially those CANfounded bottles.

From the CAN: "Ale Brewed With Pumpkin And Spices"; "Isle of MaGourdo is a pumpkin ale brewed specially for the fall season. Years ago[,] our Brewmaster Mike went tuna fishing in Islamorada with Bo, Bryan and a great man named Martin. This beer is brewed each year the same time as that trip. For Martin - we miss you[,] buddy."; "Drink Fresh. Drink Local."

I love when the tab fights me during the Crack! because it means that I will take my revenge in the form of an inverted Glug. It also tried to fight me, making me think, briefly, that I needed to back off before it overflowed the rim. As soon as I took my foot off the gas, though, it began to settle. Pussy! I'd have put it in a stranglehold if it had tried anything and it sensed it. It puffed its little chicken self up to two finger of puffy, tawny head, but when it noticed me looking at it askance, it sat right back down. I ain't afraid of no CANned beer at this point! No sir! I then asked for its SRM and it told me "44". Are you kidding?!? It was Deep Amber/Light Copper to Copper (SRM = > 13, < 17) with NE-quality clarity. I backhanded it for its blatant lie. Nose was weak too, or maybe that was a good thing, since I was getting tired of being punched in the nose by these overly spiced Pumpkin Ales. Mouthfeel was medium and I warned it again about its mouth. I liked that it finally showed some much-needed restraint in terms of its taste. I had endured two heavily spiced Pumpkin Ales prior to this and I was no longer in any mood for more of the same. This was actually able to strike a pleasant medium between too much and not enough. The finish was dry, but not liquid alum dry. That is what spices in beer CAN do - dry it out to the point that a white wine would be refreshing, but not in this case. Here, I was able to breathe afterwards instead of gasping for breath. Don't mess with me, boyo!

Even though I'm a thousand miles from home, the legacy of woodychandler lives on in the trunk of my car. This beer is another from him. Poured from a 12 oz. can. Has a bronze/orange color with a 1/2 inch head. Smell is mild pumpkin. Taste is pumpkin, malts, subtle spices, smooth and easy drinking. Feels medium bodied in the mouth and overall not the most flavorful pumpkin beer out there, but not bad either.

Outstanding pumpkin beer. Done exactly right. Great flavor and you get all the hints of different tastes but it's not like a liquid pumpkin pie. The best pumpkin beer I've had.

I recently tried three pumpkin beers. This one, Magic Hat Wilhelm Scream, and Southern Tier Pumking. I would rate this one in the middle with Magic Hat the lowest, and Pumking the best. Isle of MaGourdo is a decent pumpkin beer, but nothing spectacular.

I was all around disappointed with this beer considering the quality of beers Due South usually puts out. I will say there was good lacing and head retention, but the flavor was all around bland for a pumpkin beer. Most if not all of the pumpkin/ spice flavor comes in the first second of the beer hitting your pallet. There are definitely light hints of nutmeg and cinnamon, but the taste lingering on the pallet was less reminiscent of a pumpkin beer and more in the realm of an oktoberfest with toast or bread notes. There was little desire to go back for another sip with a slight bitterness in the finish.(this is also coming from a guy who really enjoys IPA's so bitterness in its place is something I really enjoy)

Hazy orangey brown in color with one finger of off white to tan head. Great lacing and head retention.
Smells of cinnamon, pound cake, pumpkin, cloves and nutmeg plus more cinammon.
Taste is sweet cake, cinnamon with a hint of booze and pumpkin. Very complex yet tasty and drinkable.
Medium to light carbonation and nice mouth feel.

May be my new favorite pumpkin beer. Lots of cinnamon and just a hint of pumpkin!

I had this one on draft during their Otoberfest festival where they released three different and new beers over a three day period. Pours from the tap a dark amber color with a decent sized white head that is quite foamy and intense. Great pumpkin aromas without being overdone. In my, there are three types of pumpkin beers: There is pumpkin pie, pumpkin cookie, and pumpkin cake. This one falls into the pumpkin cake category. Not too overwhelming but just enough to let you know the style. Not too bready and quite delicious. I didnt know what to expect from the these guys. THis is a new brewery and pumpkin beers is a hard style to nail down but I think they did a pretty damn good job. I even purchased some beer in bottles to go!