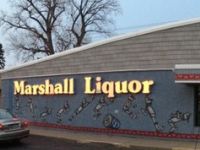 View: Place Reviews
Reviews: 2 | Ratings: 7 | Log in to view all ratings and sort

By Marshall and Cleveland ave and really not far from Minneapolis Lake Street area. It’s in ST Paul and is old school but the selection and prices are good. If your hipsters beer stores are sold out of one offs or drops try this store ,service is good and they appreciate customers.

Although Marshall Liquors may strike one as a little bit off the beaten path, inside there are several beery jems waiting for the intrepid beer hunter.

Once inside you'll find the place to be a bit on the larger side and with a fairly open floorplan. Insofar as beer is concerned, the placements consist mainly of a series of floor-stacked beers and a between eight and a dozen freestanding, branded displays. This primarily includes mass market domestics of the light and pale lager variety, as well as their derivatives. Also featured in this warm selection are regional and Craft beers from the likes of Schell, Summit, Deschutes, and Sierra Nevada. Likewise, there's easily a half-dozen imports (and brands of import-origin) which are merchandised warm, such as Guinness, Bass, Beck's, and Stella.

While the warm selection is average at best, the cold box features a better than average selection of large format bottles and singles, including 5L mini kegs. Placement of Craft brands throughout the cold box tends to focus less on geographical boundaries (points of origin) and more on families of beer relative to time of original arrival, and thus Leinekugel's Craft feature at the East end of the cooler, four or five doors in. More recent arrivals (Deschutes, Odells, STONE, Brooklyn, Alaskan) and single, large format Craft are al but crowded to the West end of the cold box, and this placement puts them almost straight-back from the point of entry to the store.

In the past, "hidden gems" here have included Surly Four and BCBS after they had long since been considered sold-through at popular "fishing holes" elsewhere ; )

Pricing is fair, often on the lower end of the standard 20-35% markup from wholesale, and selection tends to be fresh and well-rotated. This isn't to say that there aren't a couple of price spikes or bottles (and indeed entire cases of industrial swill) which are past-prime or have been missed in turn (and in fact this sort of thing is inevitable at all but the best retailers).

But in the end I consider Marshall Liquor to be worthy of a visit every now and then, especially as it's across from Izzy's Ice Cream and Kopplin's Coffee, and on your way to all the fun that Minneapolis's Lake Street has to offer.

Marshall Liquor in Saint Paul, MN
Place rating: 3.96 out of 5 with 7 ratings