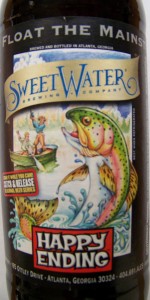 Taste, more roasted malt, not acrid or super bitter, around 70 ibu that has melded well with the rest of the beer after a few years in the cellar. Still finished dry. The alcohol was hid ok, close to average. Any chocolate feels are from the barley and of the unsweetened impression set. Feels like they went with chinook and cascade hops here for the bitterness. Its a decent beer and I don't think someone who is big into stouts is going to hate on this one. Middle of the road to slightly better consistently when I've had this a few times.

Rated by KensWorld from Florida

Rated by rkarimi from Colorado

3.58/5  rDev -8.7%
look: 4 | smell: 3.5 | taste: 3.5 | feel: 4 | overall: 3.5
I am really starting to see progress in the eradication of The Bottle Backlog here at Chez Woody, plus as an unexpected bonus, I am able to do a number of brewery horizontals, some more extensive than others. This beer marks the beginning of one such occasion with three more of SweetWater's beers to follow.

From the bottle: "Bottle Conditioned for Fresher Taste"; "Put a Smile on Your Face!"; "Don't Float the Mainstream!"; "An impressive thick-headed specimen of an Imperial Stout."; "This stiffy is dry hopped to the rim with centennial [sic] and cascade [sic] hops, delivering a face full of 69 IBU's, resulting in an explosive finish."; "It put a smile on Kirfabulous's face!"

I was not smiling since this is the kind of adolescent nonsense that led to the Brewers' Association calling for censorship, which I do not agree with either. I bought this a while back, but I might not be so quick to do so now. If the flip side of free speech is censorship, I would prefer to vote with my wallet & pass up this beer in favor of others in the style.

I Pop!ped the cap & I have to cop to needing to hold myself in check in order to perform a gentle pour. It was marked as bottle-conditioned, which really required such a pour, no matter how angry I might be. Once sufficiently decanted, a vigorous in-glass swirl raised two fingers of dense, rocky, deep-brown head with decent retention, leaving behind nice lacing in its wake. Color was solidly Black/Opaque (SRM = 44), allowing ZERO light penetration. Nose had a sharpness of treacle and Geritol along with coffee, smoke, baker's chocolate & a light mintiness. Hmmm. Mouthfeel was big, thick, dense & simply a dollop having been dropped onto my tongue. I allowed it to roll around and warm slightly to better gauge its flavor. It had a medicinal sharpness that was very reminiscent of the time that I tasted my grandparents' Geritol as a kid. It was not helped by that taste of treacle which only compounded the sharpness. Phew. I looked at this site's style description, but this was neither infused with anything nor cleaner in flavor. In fact, this struck me as not clean at all. There were a lot of clashing, discordant tastes that added up to less than a good time. Finish was dry, but that was more a result of its ABV than anything else. I'm sorry, but I am doomed to be an outlier on this one.

Rated by RBorsato from Virginia

3.88/5  rDev -1%
look: 4 | smell: 3.5 | taste: 4 | feel: 4 | overall: 4
Color is black with moderate khaki colored head. Lots of lacing. Smell is roasted malts, cocoa and a bit of coffee. Taste is definite cocoa nibs with a roasted medium darkness coffee. Solid beer but I wish this had a deeper body. Flavor leaves you wanting another sip and hoping for a bigger punch that never comes. I love stouts n this is solid but there are better ones. Would love to try this on tap though. Beer is much better as it warms. My advice is drink this one at close to room temp.
Aug 22, 2016
Rated: 3.78 by Marklaker from Florida

Rated by Truck67 from Tennessee