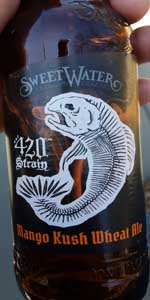 The body was clear, pale, and golden, and the head was one finger thick. The smell was melon, lemon, and green unripe mango. The taste is where a mango is most clearly evoked, as I got it right at the start of the sip. There was a touch of sweetness mid palette, and the finish was herbal and bitter. The beer was light in feel, and managed to be refreshing without feeling watery. Not too shabby.

A little enlightenment, thanks to this this one. I grew up at 420 W Walnut St in Lancaster, PA. Back then, 4-20 had not entered the cultural vocabulary, but since my mother still owns the family home, I usually try to have a small celebration there each year. Smoke? Not since I developed adult-onset asthma in my 40s! It usually includes a Lagunitas Waldos Special Ale, but this year (2019), it fell on a Saturday & I was out-of-town. Eating edibles. Yum! As to "Kush", it is from the Hindu for "Killer" as in "Hindu Kush", a term for the mountains of Afghanistan that took the lives of many trying to cross over them.

I noticed some light lees on the punt prior to Pop!ping the cap, but I like a Krystalweiss, so I decided to go with an initial slow, gentle, C-Line pour, followed by a later lees-only pour. I was only about halfway into it when the foaming created three-plus fingers of dense, rocky, foamy, bone-white head with excellent retention, giving me time to regroup as it fell, leaving great lacing in its wake. Color was solid Gold (SRM = 5), causing The Gelt Gang of Croesus, Mammon & Midas to take a break from watching the 2019 NHL playovs in my living room & come charging into the kitchen for a taste, Sheesh. Nose was well done, with both an obvious mango and (ahem) kush presence. Mouthfeel was thin & watery. Okay, I get that it was a specialized Wheat Ale, but this lacked body & any kind of worthy mouthfeel. The taste was eye-opening with an initial tropical fruitiness followed by an extreme dankness, bordering on skunk. Wow! They really toed the line in/with this one. A bit more skunky & I would have been put off. The mango infusion was definitely helping. Finish was semi-dry to dry & actually highly refreshing,
And now, for the lees pour: The inclusion of the lees only produced a slightly-greater haziness. The nose remained about the same, maybe a bit more pronounced in terms of the mango, but not by much. Mouthfeel was slightly fuller, enough to be noticeable, at least. The taste was more towards mango, but is that the point? Hmm. Finish had a more kush-forward flavor.
Which is your bag, man? Fruit? Kush? This beer kind of forces you to make a decision.

Holy shitsnacks, that's skunky! Seriously, pop that bottle top and everyone in the room will think you just exhaled a bowl. As strong as the aroma is, the flavor is unexpectedly gentler. not really getting any mango or we ill characteristics in here, although I'm sure I'd miss them if they were gone. Overall, super enjoyable if just for the aroma, but not quite the flavor bomb of New Belgium's Hemperor.

From the bottle, it pours a clear golden color with a nice white head that reduces and leaves lacing as you drink it. In the nose, a bit of skunk and fruit notes - mango? In the mouth, pleasantly dank and slightly sweet.

Poured from a bottle into a pint glass.
Appears Golden yellow with a nice foamy white head that lasts and nice lacing.
Smells initially dank but fades into a much less dank, and sweeter fruity smell.
Taste wheaty, fruity, sweet.
Mouth feel is medium+ with nice carbonation.
Overall, a nice wheat I definitely want to have again.

On tap. Poured a clear, golden orange color with a small, khaki-colored head of foam. It smelled dank and resiny with hints of sweet mango. Very dank tasting with mango and very little wheat. Had my burps tasting like weed all night.

Smells like straight-up burning pot. My immediate thought was that there must be hemp in this, but the bottle clearly states that there is none. I'm curious as to how they achieved such an aroma without it. Anyway, it's got some particulates floating about, but is generally pretty clear. Taste follows that dank nose, but there is a nice mango burst on the back end and it doesn't taste artificial. Bonus points for that. Third sip made me burp and it tasted like I had just taken a mondo bong rip. This isn't a bad beer at all, but the reefer taste gets a little overwhelming about half way through and it becomes something of a chore to finish. Your mileage will vary depending on how much (or little) you enjoy marijuana.