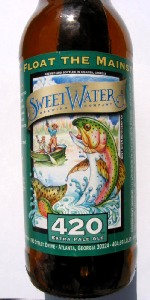 Appearance: Typical orange-amber with a very small head which quickly dissipated. Not much in the way of lacing. I do like the trout on the bottle and tap though!

Taste: Simple sessionable hops and light malt, hint of biscuit dough. Perhaps it is the name but it tastes just a little sweet.

Smell: Smells very malty, with almost no hop presence. Light smelling, with only hints of bread and yeast.

Taste and Mouthfeel: The taste is weak. Very little hops, and all I can taste is a bread/corn flavor the doesn't do it for me. Nothing else. No complexity, not even tasty or flavorful. Light and boring tasting. The mouthfeel is medium-bodied.

Drinkability and Overall: I don't like it. I'm a fan of any Pale Ale, but an Extra Pale? What does that mean? Extra hops? Extra flavor? Nope. Extra weak.

Thanks, anyways, to rajendra82 for the bottle

From the can because it is fresher that way (no light damage and no oxygen head space) This is a beer I can enjoy. A cross between a pale ale and one of those hop frenzied IPA. Nice colr, nose and mouth feel. Dry flavor hints of malt and slight citrus hops flavor. One of my favorite ales since the 80's (the others Sierra Nevada Pale, Harpoon IPA, SA Rebel Ale)

Dank. Almost smells as dank as Newcastle. It's pretty bitter (apa). Nothing special. Light color, light head, bitter smell. Glad I tried it, won't go out of my way to drink it.

Sweet water 420. LOL BLAZE #AMIRITE??? It's ya boy down_to_clown_69 comin atchu with a review from beyond the grave. I'm stoned as a boned abalone pinecone from Cologne right now and I don't think anyone knows...right...?

I digress, this beer is a winner. Just like our fair lady, Mary Jay, this drink is the perfect gateway beer to the bigger and better things. You have that wussy friend who says "IPA's aren't for me!" Well slam this mamajamma in his or her face and say "RIP DAT ISH, WERE GOING TO MAGIC MOUNTAIN!"

Magic Mountian is real friends, and it's a watering hole where the Sweetwater 420's are on special, the bar is pizza, and the waitresses are actually genuinely interested in your sad, pathetic lives.

And with that, I'm out. *Puff's tobacco pipe with legal USA grown tobacco, disappears in a coud of metaphorical legal tobacco smoke.*

I think 420 is a great session beer. It's readily available so that makes it easily to pair with a quick BBQ or pizza dinner, etc... That said its an awesome beer to join with such and not to bad to just go out and have one with the buddies. Why does beer have to meet a requirement of standards compared to the most hoppy or malty. It's a good and tasty beer, enjoy it for what it is, not what it isn't. Fuck the mentality that all beers and styles should taste like this or they suck.

Fresh cold 12 oz. bottle, great label artwork, and custom raised lettering is always a nice touch to make a great impression. Best by date is 8-16-17...I'm pretty close to Atlanta, so no worry...Had a pint can the other night at a long hot Saturday festival, craved more today...

Poured into IPA glass, and an immediate burst of fresh citrus and greenery filled my nose! Big, full head, dissipating reasonably, and leaving a nice lace around the glass. Chuggable.

The malts come in gracefully after the citrus introduction for a great balance. I'm typing as I imbibe this fine brew, and it's almost gone already!

The flavor is crisp and not as citrus as the aromas would imply, but has that slightly bitter end that demands you have more. More evergreen in the taste and nice carbonation, smoothing out to a dry, but wet finish.

This is "dry hopped with a fat stash of cascade hops." Something in common with my other favorite APA.

I find this to be a refreshing crisp, clean delight! Glad there are 5 more in the box.
A must try for any fan of APA style brews.

Looks-wise, this is nicer than I remember -- a decent layer of white foam formed when pouring, and the color is a nice shiny dark-golden sort of thing. Not entirely clear, there's a bit of haziness to it (flashlight reveals that this is due to suspended particles floating about), and there's a good number of rising bubbles from the bottom. Foam shrinks to a thin layer on top within a couple minutes, leaving a few thicker spots and a thicker ring around the edges (with some trails on the side of the glass marking where it was when I first poured.) Leaves a whole lot of lacing behind on the inside of the glass as I drink more of the beer.

Smell is fairly mild, but what's there is pretty nice; piney-ish hops and a bit of a bread and bread-crustish malt background. Hops stand out much more than the malt, though (sometimes I can actually get a whiff of them before even moving my nose in to take a sniff), which is to be expected for an American-style pale ale.

Taste is similar to the smell, but with the malt having a bit more of a presence. Actually, everything seems to be more present in the flavor than the smell now that I think about it. Hops come through right away, but rather than just piney they're a nice pine/citrus blend. The hops blend into the malt after that, and it's a bit bready like the smell but also has a grainy, almost nutty-ish sort of quality to it along with the bread-crust thing, which definitely seems to add some depth to the malt. There is a slightly odd flavor in there too, not really noticeable until the aftertaste, but that isn't always present. There's some hop bitterness that lingers in the aftertaste as well, at least after the halfway mark, and it seems to overpower the slightly odd flavor that I can't quite identify. Overall this tastes pretty good, though it definitely comes across as a bit of a milder beer than when I first tried it -- fresher that time, or just my taste buds getting more used to hoppy beer over time?

The feel is pretty nice here -- it's very drinkable but doesn't feel too thin or watery, just light enough to drink through quickly while substantial enough to let you know that it's definitely a beer (and not a "lite/light" beer, either.) There's an interesting crispness to this that I don't get in every beer, almost makes it seem like it's very cold even when it's had some time out of the fridge and isn't actually that cold temperature-wise anymore.

Overall, while not as much of a "wow, this is really good!" beer as it was when I first tried it, this is still a nice beer that I'm glad I picked up again. Having it bottled rather than draft, it actually reminds me a good bit of Sierra Nevada Pale Ale -- maybe not *quite* as good, but it has some of its own unique little things that make it worth having every now and then. I'll have to have it on tap again at some point and see how draft/bottle versions compare with my current taste buds.

I like the can artwork, great use of color. The pour is orange, the taste is tangerine, slight lemon, minor honey note, malt, a little grassy, some floral, not bad but too much sediment & I am drinking it before the best by date. I highly recommend this beer & support your local brewers. Cheers! B

Sweetwater 420 is bitter and beautiful. One of the best beers Georgia has to offer, have drank way too many of these, if there is such a thing. Get this beer! No, like seriously, go get this beer if you haven't already.

Poured a golden orange color with a fairly bright white head that left small bits of lace of lace on the pint glass.
Aroma of pine-sol and some citrus rinds
Flavor had a vegetal note along with muted caramel sweetness and some citrus bittering, almost too acidic.
Mouthfeel was ligher side of middle with too high a carbonation rate, almost something is being hidden.
Drinkability was distinctly average, not offensive just mundane.

Working off old notes. Will update with more details if/when I have another.

Pours a clear yellow with hints of orange throughout. 1/2" white head drops to a ring and leaves no lace.
Smell is malt, hops, some spice with a note of wet cardboard way in the back.
Taste is malt, hops, spice, citrus note with grape. Good balance.
Medium bodied brew with a medium effervescence. Warming in the throat. Pretty good stuff but no standout.