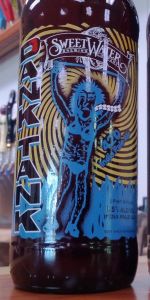 Thanks for the beer Grant. Poured into a tulip. This one pours a tangerine color with a small cap of white head that settles with a little bit of soapy lace.

The body is medium with soft carbonation. Overall not bad and enjoyable but the flavors seem artificial at points and that's a bit off putting. This is enjoyable but not a home run.

Thanks, Bendurgin, for sharing! Poured into a tulip. The color is dark gold. There is a light colored fluffy head with large bubbles.

The aroma is a blend of sweet malt and orange zest, with a hint of pine in there.

The taste is a little bit on the sweeter side, but delivers lots of zesty hop flavor in the finish. The sweetness kind of gives it some honeydew flavor as well as some caramel.

This is medium to full bodied, with soft carbonation.

Not bad but not great. This delivers great hop flavor, but I prefer a drier DIPA. Still, some might prefer this style.

I managed to procure a bottle or two of this quick moving installment in the Dank Tank series, and have not seen it much since. It happens to sound like a cross between two of the breweries most popular beers, and I like the IPA a lot. I am sharing this bomber with my girlfriend.

Poured from a 22 oz. bomber to two SweetWater 15 Years snifters. Served at 42º Fahrenheit.

(Smell) Aroma consists of a resiny citrus hop aroma on a mild malt base. The resiny aromatics are really prevalent and hit the nose the most, followed by some faded grapefruit and tangerine, indicative of mostly tart citrus notes. Hop aroma is striking and a bit sharp, followed by a mild boozy aroma. There isn't much of a malt aroma presence to back it up, so the balance is a bit wacky and the citrus hops certainly take the front. Theres a ton of hop presence but its not a pleasing aroma and some may find it offensive in its tart characteristics. Other milder hop characteristics are grassy and piney variants, but not nearly as prevalent. Potency is medium. 3

(Taste) Tastes are interesting. Hop presence is much milder in the taste than the nose would suggest. There's a significant "soapy" film-like character and taste to the hop presence and malt character in this beer. Overall its rather plain in its delivery with little standing out aside from the small but interesting flavors that peek in from time to time; a piney and tangerine candy comes through late in the finish, but overall the resiny flavors are most dominant. Sweetness is higher than average primarily due to a heavier body, blending the line between APAs and IPAs. Really mild flavor but it may suit you fine if that's your thing. Overall it was underwhelming in flavor for me. 3

(Mouthfeel) Really slick, filmy with little carbonation presence aside from some subtle and mild froth, hardly enough to excite the tongue. Some crispness to the beer would benefit the texture and compliment the flavors tremendously. Body is light-medium, alcohol presence is low. Very underwhelming compliment to the mild flavors. 3

(Overall) Really more promising by appearance and smell than it turns out to be. The flavors are subtle but decent if you are in for a mild-tasting American IPA. I would recommend this for people who are looking for the line between the 420 and the IPA, as I think it does this pretty well. I have to give it at least an average score because it is good for what it is but it's not particularly for me, and I would likely not get this again upon it not being anything particularly special or interesting. 3

Thanks to JLindros for sharing.

T - Taste is WAY too sweet for my liking with a ton of caramel malts and some warming booze. More of those light citrus orange notes with a slight bitter finish.

M - Eh, decent carbonation with more of the alcohol presence.

A 22oz bomber picked up today from Tower. Last case, glad I found it!

A - A clear copper, with 2 fingers of head and nice sticky lace all over the glass that will not recede. A little darker than 420, and a ton more head and sticky lace. Pretty gorgeous

T - Big citrus hop notes, but with a huge malt backbone. It is essentially just as described, a hoppier 420.

O - Amazing beer. Sweetwater needs to put this one in the regular line up. Its that good. Its obviously the same recipe as 420, just hoppier and stronger. Love it!

Pours an amber color with a 1 finger head and little lacing.

Taste follows the nose with a nice citrus flavor of tangerines and oranges with a little pine. Not too bitter, a nice balanced malt sweetness on the finish.

Mouthfeel is a nice medium, with good carbonation.

Overall this is one the most well balanced IPA's I've had. Great hop flavor and a nice strong malt sweetness. Well done Sweetwater!

Picked up a bottle and poured into a pint glass. Pours light copper with off-white head. The aroma is dank with herbal hops and some slight fruitiness. The flavor is general hoppiness with some fruit. The hop character seems more muddy than bright, but it’s still a pretty tasty beer