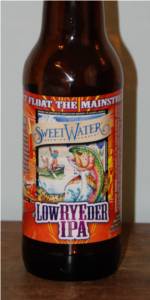 "A flame throwin' IPA ignited by a 25% shot of rye malt and capped by a booty hoppin' blast of Mt. Hood and Centennial hops that makes this IPA bounce!" Brewed in the style of an American Rye IPA, the latest addition to SweetWater's Year Round lineup, this beer first hit stores in June 2012 and has been a very popular local item since. Available in 6 packs year round and in occasional variety "Tackle Box" packs.

Poured from a 12 oz. bottle to a SweetWater pint glass. Served north of 46º Fahrenheit.

(Appearance) Pours a frothy cream head of a golden-white tone over a moderately hazy golden amber body with fine sediment in tow. Carbonation is moderate and relaxed. Lacing is light and stringy, retention is average. 3.75

(Smell) Expect aromas of tropical fruit and floral hop aromas with lesser citrus undertones and a modest bitterness to balance. The malt profile is certainly changed over the standard IPA, expect a touch more body, some moderate bready malt character, a pinch of graininess and some peppery aromatics. The aroma is also a touch sweeter and while just as potent as the standard IPA, the balance is fairly even between malt and hop character. Altogether, the meshing of flavors works out quite well. 3.75

(Taste) The flavor is a touch thinner than the aroma predicted, with a resinous, flat citrus hop note and a touch of dry, peppery rye amongst an otherwise modestly sweetened malt base. A moderate bitterness does a good job at balancing out any body enhancements that this beer has. Off flavors are few- any graininess present is considerably mild and adds a drying quality that pairs nicely with the citrus zest and resinous pine hop character. The beer keeps securely light and quaffable despite being in a tier that is usually more assertive than a standard American IPA. This easily stands amongst the most drinkable Rye IPAs that I have had to date. 3.5

(Mouthfeel) Malt texture is smooth with a touch of thickness to it. Carbonation adds a touch of crispness. Body is medium amongst Rye IPAs, medium overall. Alcohol presence is moderate. The drinkability of this beer is very high despite the general caveats of rye additions to a beer, the texture is not overly viscous nor is the balance overly sweet. It keeps enjoyably light while equally unique with the addition of a slightly enhanced malt profile. I did find the carbonation a bit overdone- even with the beer being as lightly bodied as it is, I was still hoping for a less zippy texture from the carbonation. 3.75

(Overall) I'll admit that I'm not a big fan of most variations on the American IPA, but I'll take a Rye IPA over a White IPA any day. The sharpness of the malt bill is usually what complicates the RYE IPA drinking experience, but this beer keeps the rye contribution mild enough to where that isn't a problem, but rather a welcome variation. While the Rye IPA is a hot trending IPA variant right now, there's not much that sets this apart from the other contenders in the style. It does, however stand securely amongst existing recipes as a lighter-bodied recipe which makes for a more drinkable Rye IPA. "Rye-phobic" IPA drinkers might consider dipping their toes in this beer to see if the style is for them. 3.75

Grabbed one on my way through Atlanta Airport at their Draft House at
Terminal B. This IPA shows a clear, deep amber color with a modest white top and
similar lacing. The aroma is very nice with solid citrus and a hint of rye
grain along with a touch of caramel malt. The flavor brings an immediately
satisfying idea of crisp lemon/grapefruit hop, and a notable dry rye wheat
element. Nice graininess while offering lots of hop bite along with some orange,
fruit sweetness. The body is just about medium with a fine but very effective
carbonation that makes for a lively feel that works for this tasty, refreshing
brew.

A. It is relatively clear with some hints of sediment. It has a caramel color with a limited head and some lacing. A good deal of bubbles coming up throughout.

S. It has a very sweet, honey scent.

T/M. It has a sweet malt taste. There's some caramel taste to it. A mild hoppy bite. There's some dark fruit taste in there, a very mild tart lemon taste underneath. Light body.

O. THis is an easy to drink, enjoyable brew. It has a nice balance and a fairly complex taste.

A: Pours a hazy golden apricot in color with light amounts of gentle visible carbonation and some orange highlights. The beer has a finger tall creamy off-white head that slowly reduces to a very thick film covering the entire surface of the beer evenly. Significant amounts of lacing are observed.

S: Light to moderate aromas of caramel malts with some slightly stronger aromas of citrus/orange and herbal/floral hops.

M: Slightly heavier than medium bodied with moderate amounts of carbonation. Smooth upfront with some light amounts of dryness in the finish.

O: This beer is enjoyable but the combination of the rye spiciness and bitter hops make this one that I probably would only have a single of in a session. It is definitely beer I would have again but is a little more intense than easy drinking.

A: Poured from a bottle to a pint glass. Had a yellowish color and a clear consistency. There was a half inch of foamy head that dissipated after a fair amount of time. Pretty good lacing.

S: A sweet, enticing aroma of hops and light fruit.

T: Tasted of hops (an average amount), some light malt, and a good deal of fruit (seemed like a citrus element). The advertised rye was present, but not overwhelmingly so. A sweet, light, easy to like flavor.

M: A highly carbonated beer with a smooth finish. Light-bodied.

O: This is a solid beer that's very focused and really drinkable. A session beer if there ever was one.

Thanks to ATLCarl for stuffing a brown box with goodies; this one unrequested but very welcome, since it has rye in it somewhere. 12 oz. bottle.

Pour is yellow-orange with haze. Aroma is strong & fruity. Citrus, grapefruit, tropical-ness, dose of sweetness clears out the sinuses. No bitterness or rye, but hey, good nonetheless.

LowRYEder IPA makes me think Sweetwater should stick to light, easy-drinking brews. Lovely mix of the earthy, spicy rye with a dash of bitter, citrusy hopping. Bitterness builds with each sip. The balance is excellent, & it's great to sip.

Tastes great, goes down easy, simple, straightforward. Just a very good beer that's only a thin mint away from excellent.

Pours a hazy light amber with one finger white head, a couple of thin rings of lace are left behind. Smell: floral, spicy, lightly grainy and sweet, grapefruit. Taste: grapefruit, spicy, biscuit, caramel. Medium bodied, creamy carbonation. Not usually a rye fan, but this is good. Best by 12/19/12.