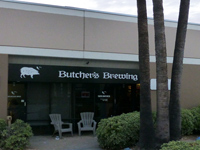 Checkin the place out for the first time. Got here early and was first customer. Very friendly and laid back staff and atmosphere. Lots of new beers to try and was not disappointed. 'Choice' was outstanding at The Main Tap and enjoyed 808 at the brewery. Taking 'select' in growler. Reasonably priced. Will b back.

Tiny place with HUGE beers! The owner is a poster boy for what San Diego beer is all about. With a gourmet culinary background, he's amazing at bringing taste profiles you wouldn't expect, and I swear Rey would hop milk! There are normally more than a dozen fresh beers on tap, which is pretty impressive for a place this size. If you're a hop-head like I am, the Prime Imperial will wow you. The Select Rye IPA is Citra hopped for an amazing smooth yet high IBU brew. The Free Range is Nelson hopped. 'Nuff said. He's put out some fantastic lower ABV, session type IPAs that really bring something to the table too. His Prospect Pilsner (and to me, Pilsner was always Latin for 'BORING') is very nicely hop forward and in that 5%-I-can-have-a-couple range that's nice when you plan to stay a bit longer. The Old Sow session IPA is another with huge flavor and a lower ABV.
If you're not a big hops fan, try the Ironhide ESB...super well balanced. The Sari Sari is full of calamansi, a Filipino citrus fruit that's kind of lemon-limey. Nice on these hot east county days. And of course, Continental, an extremely smooth Breakfast Stout is pure heaven on Nitro! Dog friendly, it's one of the constants on my list to visit.

First off, in a world of six or seven$$ pints and 8oz pours, $5 pours across the board is very refreshing. Also $12 growler fills is way better than the $18+ I've been seeing.

That said, having been here when it was Manzanita, these guys have done a great job remodeling, hop green with wood accents and Buthcher Block counters. Pumping A/C (which is a must for the heat in Santee). Glass seperates the tasting bar from the brewing area, which looks to be the same equipment with some improvements. Clean Bathroom

The beers were great, not a dud in the bunch. will review the beers individuallly. but I can say I had no off flavors or flaws. Highlights were the hoppy beers, one was very reminiscent of Alpine's Nelson. The hoppy pale was up there with the best sessionable IPA styles. Their Breakfast stout blew me away, ESB was solid, Creme Ale with coconut was good. Good variety in styles. 11 beers on, plus 3 nitro taps. Bartender mentioned getting a cask engine soon.

Staff was fairly knowledgeable. Got tour of the back from one of the brewers. No food but they did have food trucks scheduled

Overall, I think these guys are making the best beer in the Santee, a great stop to make on the way to Alpine. I made the stop between Societe and Alpine it was 10 min from Societe and 12min to Alpine from there. Their beer held up well to both comparisons.

Located in the usual light industrial building but with a pleasant, though spartan, tasting room. Big windows look into the brewing facility in the back.

We were immediately greeted and made to feel at home. Tasters offered. The inexpensive set of five 5.5 oz tasters is only eight bucks. Eleven beers on tap, including a couple of IPAs, pale ale, "Barely Wine," Hefeweizen, stout, and ESB. They like flavors like coconut and coffee. They are proud of "doing things a little differently."

The brewers and customers were all jolly and enjoyed talking about beer. I have rarely encountered such a friendly place, for being such a local hangout. The blackboard mural of pigs at the bar is a classic. I was wishing for a pretzel, though.

If you're looking for a rail excursion, the San Diego trolley actually goes all the way from downtown to within a couple of blocks of this place. Santee is like another world away from 30th Street. We went walking at the Santee Lakes Park and it made a great evening to finish up here.

Finest Made Ales in Santee, CA
Brewery rating: 4.07 out of 5 with 4 ratings