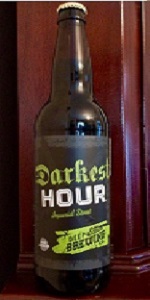 As far as imperial stouts go - this a fairly good representative of the genre.

Pours a deep black with tan foam, resolves with good residual lacing and minimal effervescence.
Smells is predominantly roasted malts, cocoa, espresso. Taste is sweet malts forward, some coffee, cocoa, hint of leather and smoke with transition to bitter hops mid taste and a rather bland finish.
Mouthfeel is medium, scant effervescence, not syrupy but a rather bitter aftertaste.

Overall, not bad - but something missing that would make this beer stellar. Aging in bourbon barrels? throw in some chillis? Mid note on is not good - I wouldn't seek this stout out and given its price point here in Texas - I feel rather gypped.