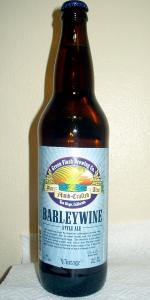 Pours a deep amber to auburn color. Thin head barely around 1/6" at most when it settled. Aroma of caramel, wasn't picking up those cardboard oxidation notes in the nose. Hopping wasn't evident at this stage either.

Taste revealed that this wasn't going to be a heavy boozy barleywine. Also there was minimal oxidation, but what there was you could say was complimentary, the caramel notes bonded nice with a light woodiness instead of a beat up cardboard box kind of vibe. The bitterness was high, but not three digit hypothetical ibu number high. I'd guess around 75 ibu at this point. Caramel not only bonded with the light woodiness but also a light brandy nuttiness to it as well. Dude, I think this aged pretty well.

Treacly sweet caramel nose, plus some booze; very much of the style.

Taste is of sweet caramel with a subtle hop undertone. Not as over-the-top as many US Barleywines can be. Not amazing, but better than average for the style.

Rich and brownish in taste, meaning there's a slight burnt flavor with string caramel tastes. Not to sweet in the flavor. Good hoppy bitterness in the swallow which makes for a bittersweet aftertaste. I get a Grappa taste in the finish.

Reviewed by pmarlowe from Virginia

Beautiful ruby color. Malt forward with nice toffee aroma and taste. Very dry and mildly bitter. Not an ounce of sweetness here. This has aged gracefully, the hops have receded but still leave mild bitterness to balance the malt.

Hazy crimson and carrying a gentlemanly visual density, the ale crowns with a rich ecru lather. Scents of deeply caramelized and nutty malts couple with citrus, pine and orchard fruit for a powerful perfume with a spicy tingle on the nose. Robust sweetness flirts with toffee as its nutty character reflects a "cracker jacks" candy memory.

The beer's hoppy side blossoms on the middle palate as the dryness of the beer begins to pull the reins on the sweetness and the fruit-forward flavor emerges. Grapefruit, orange and apricot pull ahead, doing so with an unexpected taste of ripe red apple. Its balanced taste refuses to prefer the hops or the malt while the taste trails with a spicy bitterness of deeply resinous pine, citrus peel and pith and oddly enough- cinnamon.

Strong and full in body, the ale's spicy, brandy-like burn, it's bitter, snappy hop character and a gentle quiver from the malt structure suggests a semi-dry finish. As pine and citrus mingle deep in aftertaste, its the hops that finally outlasts the malt with a firm grip on the gullet.

The pour is cloudy amber-brown with a foamy, light tan head that lingers for some time.

A notable toasted barley sweetness in the aroma along with a slight tropical fruit note.

The taste might have had an alcohol bite four years ago when this was first bottle but since then it has mellowed into a barley malt and grape forward sweet brew. With a bitter and slightly smoky finish.

Reviewed by HopsAreDaMan from Missouri

22oz., 2012 vintage acquired on sale. Good carbonation when opened (from fridge); pours beautifully into my snifter, with a hazy, dark, orange-brown color, and a nice light-orange colored head. Fruits and a bit of malt in the aroma, and quite a bit of alcohol. Taste is very sweet, and it amazingly--considering it is three years old--still has a good amount of hop flavor; it's not too heavy on the tongue. I think I like it better cooler rather than warmer (there's plenty of flavor even when it's cold). It tastes a lot like the other barley wines I have had (mostly young ones), but this one is perhaps a bit smoother (as I would expect for being three years old).

This is a very enjoyable sipper. Barley wines are one of my favorite beer styles, and I would be more than happy to share this delicious barley wine with others.

A: A hazy, rich amber with an off-white one finger head that clung on tightly.

T: Caramel malts slide in with a nice citrus hop "ping" following. Smooth, balanced, robust and semi-sweet. The hops keep on into the finish with another round of caramel starting the dance again. The 10.9 quickly mellows you out.

M: Low to medium with medium carbonation. A bit dry.

O: A real hybrid between American and English barleywines. Not too hoppy with a "just right" malt balance. I'd love to try more, especially with age.