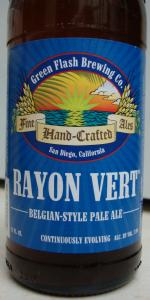 Reviewed by TenHornsProud from Colorado

Smells of sweet malt, orange zest, and funky, musky brett. Big, pleasant nose on this one.

Taste is up front brett funk that fades into a carbonated ever slightly malty taste and ends on a bitter and bretty finish. Musky and earthy flavors ride high. It is a nice brett platform but there is little complexity here...too one note, maybe some time will improve this.

This is a good brett beer but it is too straightforward. Nice for a brett kick but little else. This is far from Orval, make no mistake about that.

Taste drinks so much lighter than its appearance, there is this breezy light malt mouth feel, but a plethora of citrus and berry like notes entertaining the palate solely based off of the brett development. Its been an amazing journey and this really is one of the best expressions of brett I've ever come across. Even the horseblanket seems to provide maximum warmth with the lowest weight threshold possible.

Trade me all of your dusty Rayon Vert bottles.

A nice sipper; I could see this tasting great on a hot summer day.

Reviewed by ONUMello from Ohio

4.44/5  rDev +15.6%
look: 4.25 | smell: 4.5 | taste: 4.5 | feel: 4 | overall: 4.5
From notes 11/6/12: Pours a hazy amber orange producing a huge, to the point of being difficult to pour, finely bubbled and foamy, lasting, egg shell white head that leave a nice coating of chunky lace. Aroma is tart lemon/lime citrus, Brett musty funk, earth and hay, resinous hops. Taste is Brett mustiness, earth, citric and pine hops, carbonation heavy peppery bite and band-aide phenolic. At first I didn't like this combination of hops and Brett but after waiting a few days for a slow, contemplative drink of a second bottle I think this could grow on me. More later.... With the third bottle I am developing a fondness and appreciation for this. Upon deep analysis I am becoming a fan. (Note: Too bad Green Flash abandoned this. I've not found anything to replace its uniqueness!)
Dec 07, 2017
Rated: 3.33 by brother_rebus from Maine

3.54/5  rDev -7.8%
look: 3.75 | smell: 4 | taste: 3.25 | feel: 3.5 | overall: 3.5
This is Green Flash's most rated beer ever to be retired.
I am reducing my rating in this review because it really does have too many bitter hops for foods that customarily go with Belgian foods. But I also could have had Rayon Vert with spicy food... if I was thinking far enough in advance.
On the positives: a persistent foam, enough fruity and herbal aromas to intrigue... and a really soft mouth.
At any rate, it is now a moot point.

Reviewed by Zach136 from Georgia

Reviewed by Onemoresolo from Connecticut

4.18/5  rDev +8.9%
look: 4.75 | smell: 4.25 | taste: 4 | feel: 4.25 | overall: 4.25
I've been pet sitting in a different part of Connecticut for the past two weeks. Fortunately for me, that puts me about two miles from the largest liquor store in the state. I was taking my time browsing through the exotic sours/Belgians/European oddities section today when I came across a few bottles of Rayon Vert. I'd always wanted to give it a shot since I love Orval (especially with age on it), so I bought three bottles. Their dates? 07/24/12. That makes these over three years old. Mmmmm, bring on da funk!

Look: The 10 minutes of slowly pouring this foamy monster into a glass was totally worth it. Atop a brassy opaque beer sits possibly the most lusciously fluffy head the world has ever seen. This looks like the top of a root beer float after mixing the vanilla ice cream in. It's white, wispy and beautiful.

Smell: Ohhhh man! I can smell the funk wafting its way over already. On closer nasal inspection, it throws all those crazy bretty barnyard goodies up my nose. Hay, leather, citrus, it's all here!

Taste: Ripe peach and apricot flavors lead into an earthy/funky brett flavor explosion that's backed by a little citrus, clove, and even some hop bitterness. Not quite as tactful as Orval, and there are some hints of metallic bitterness on the finish, which is oh so delightfully dry. But hey, at three years old, it's still quite the beer.

We need more beers like this. I think the modern interpretation would be to dry hop the shit out of it with some new world hops, maybe Galaxy or Citra? I'll probably drink another one of these within a few weeks, but I think I'm going to cellar that last bottle for a long time.

4.25/5  rDev +10.7%
look: 4.25 | smell: 4.25 | taste: 4.25 | feel: 4.25 | overall: 4.25
L: Pours bright gold – a very slight chill haze that disappears as the beer warms. Has a very rocky 3” finely bubbled white foam collar that grips the side of the glass.
S: Resiny, piney hops backed by citrus and light bread.
T: Blends Belgian yeast flavors ripe and over ripe fruit, a light dose of funk, with a West Coast hop character and pale ale malts for a very balanced blend of flavors. Starts with a light sweetness and finishes dry and refreshing.
F: Very creamy, luscious and soft in the mouth with the kind of texture only Brett can produce.
O: A well designed and well balanced of West Coast meets Belgium.

Reviewed by Cyberkedi from Georgia

3.54/5  rDev -7.8%
look: 3.75 | smell: 3.5 | taste: 3.5 | feel: 3.75 | overall: 3.5
Fruity aroma has a yeasty overtone and a malty underpinning. Pours a pretty clear amber with a very thick and fluffy eggshell head. Sharp flavor is fruity and a little sour, with malty and yeasty undertones and a hint of woody hops. Smooth, firm texture has a subtle but persistent tingle and leaves a fruity, slightly hoppy finish. Overall, decent.
Apr 24, 2015

Reviewed by SoupKitchenBeerSnob from Florida

3.08/5  rDev -19.8%
look: 4.25 | smell: 3 | taste: 2.75 | feel: 4 | overall: 3
I love a good Belgian so of course I had try this one... Pours a thick, foamy head that settles after a few minutes. Has a nice look, but the smell has a slightly sour note to it... Taste wise, it gives off an initially promising flavor that is almost immediately followed by a less appealing funky aftertaste... Good carbonation with a crisp mouth-feel though... Unfortunately, I just can't get past the aftertaste. When I think Belgian pale ale, I think Duvel, and this beer just doesn't do it for me. I'd still say that you might want to give it try anyway-- God knows I've tried far worse and I'm sure you have too... Cheers!
Apr 18, 2015
Rated: 4 by nathanmiller from New York

Reviewed by tfsimpkins from Florida

Rated by Harvest06 from Oregon