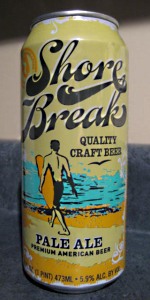 This beer pours a just off-clear medium golden amber hue, with three fingers of puffy, rocky marshmallow-esque white head, which leaves some cloudy splotches of streaky lace around the glass as it lazily recedes. Ok, I'll bite, given the huge uptick in looks for this heretofore fugly brewer.

It smells of biscuity, grainy pale malt, hard water minerality, and mildly skanky leafy, weedy hops - still waiting for the other shoe to drop here, folks. Ahhhh, there it is - the taste is grainy malt, quite soured by a combination of pithy cereal grain, understated acetone, a twinge of diacetyl, and co-opted, twisted, beaten and gagged hops. The change in killer flaw profile is weirdly subtle for this particular offering, but it is indeed there, and getting harder to discern than one might have initially imagined.

The bubbles are capable of popping, but display little enthusiasm for the effort, the body an adequately wan medium weight, and a little too metallic to be deemed all that smooth. It finishes mostly dry, the dead yeast, underwhelmingly and skanky hops, and now laser-focused Minhas house 'flavour' doing their darnedest to undo any of that unsettling up front goodwill.

Gaaaah! Overall, this is not really as bad as expected, but its origins do eventually leak in, a clumsy sign that the brewer still doesn't get it. It's not a matter of keeping the cracks to a minimum, it's about committing to providing the best product you can. And in that respect, Rhinelander (or, Minhas, still, really?) continues to fail here, if not miserably, then enough to continue warning any and everyone away from this less than meager offering for the style, and beer in general.

Rated by Captain68 from Russian Federation

Rated by Maxms from Russian Federation

Medium amber with golden highlights, the frothy ale leads into a strong floral and spicy scent of potpourri and synthetic with a background of toasted grain. Moderately sweet with a caramel and honey splash of the tongue, the grain character is of dry granola.

As the sweetness backs away, its the hop that power through with grapefruit, orange and flower pedals that hinge on rosy. Trending bitter, spicy and solventy in taste, an unsettles spice develops from the floral hops and add an ill-balanced taste of vinyl or linoleum.

Medium light and disturbing the late palate with a harsh astringency, the beer's tannic properties throws off the balance in taste and leaves a long and vegetal bite on the tongue that's not common to the beer world.

Reviewed by PacificTrim from California

S: Light malty corn/sugar adjunct dry funk. Not enough to be offputting but it's not enticing either.

T: Sadness. What is this beer trying to be? adjunty/sugary/corny alcohol that has been lightly hopped and backed with a malty/sugary sweetness. Couldn't name the hop because it's so fluffy light. It's borderline malt liquor flavor. If I were to homebrew this, I wouldn't serve it to friends, I would probably stack it at the end of a session when taste didn't matter anymore.

O: I surf often and I can't say that I've been in the water with many people, or brewers for that matter, from Monroe, Wisconsin. Buy this if it's your first foray into beer other than Miller/Coors/Budweiser but if you've experienced any basis of beer nirvana this will ruin your positive vibes. In the end it's a packaging and perception game and the `marketing` doesn't seem to jive with whats inside.

Reviewed by Bonedaddy from California