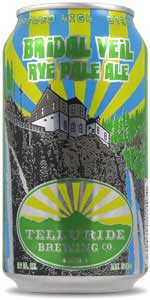 “Brewed with a generous amount of German Rye malt and an abundance of American hops” (Magnum, Cascade, Chinook, CTZ and Citra), Bridal Veil is one hell of an amped-up Pale Ale that’s packed with aggressively complex flavors. Hop- and rye-heads should seek out this beer for some palate-ripping enjoyment.

Pour - very nice honey, dark staw color with a good inch plus of white foamy head that leaves some great lacing within the glass. Clean and nicely filtered with what looks to be spot on carbonation. I'm sold, time to dive in.

Aroma - big floral hop notes, plenty of orange peel, lemon and faint hints of grapefruit and pine. Some sweetness comes through, sort of a dried pineapple meets some bread dough and bran flakes. All in all this is a great smelling beer and will certainly draw you.

Taste - first sip brings a good amount of citrus and pine with some malt sweetness and a noticeable amount of rye spiciness. The more you get into this beer the more you're going to like it. Plenty of hoppiness to satisfy someone craving an IPA but with enough to back up those hops to make most anyone happy. A nice clean and bitter finish that leaves some light tropical fruit notes on the tongue. Complex but simple? Perhaps. An all around pleasure to drink. Man, I wish I had a bunch more of these.

Overall - This is super refreshing washing over your palate as it has the nice floral citrus notes along with a great spicy and bitter finish without a lot of sweetness or alcohol to weigh things down. I really enjoyed this beer and feel its a perfect bring along for any outdoor adventures in Colorado (or elsewhere). Looking at the falls on the can makes me want to take a trip out to Telluride to see it myself- and also maybe stop in at the brewery for a pint or three! Well done on your first canned brew guys! Cheers!

12 oz can. Pours slightly hazy straw yellow with a smallish white head that quickly goes to a thin film that leaves some lacing.

The aroma is sweet bready malts and spicy rye with some dank hops.

The flavor is a little sweet bready malt with rye followed by a big, slightly harsh, resiny bitterness. The mouthfeel is medium to full bodied with low carbonation.

I am currently in Denver, touching base, but not much more, with The Old Lady aka Ma Petite Abeille and the preponderance of CANned craft beer is astounding! It is enough to send The CANQuest (TM) into overdrive, but the problem is a lack of singles and I CANnot lug that many beers around, so a CANundrum arose. Fortunately, I am an old school pen & ink type of guy and if I CAN drink and review it at the bar, then so be it, geekery be damned!

Fresh Craft on Blake Street became my source for three such CANs, so this is transcribed from notes dtd Tuesday, 30 July 2013.

From the CAN: "Brewed High - 8750'"; "Brewed with a generous amount of German rye malt an abundance of Ameri[CAN] hops, our ale embodies an earthy flvor and finishes with a hint of spice. This powerhouse of an ale excites even the most dormant of taste buds. Cheers, Chris Fish, Brewmaster/Co-Owner"; "Snow Melt, Malted Barley and Rye, Ameri[CAN] Hops, Yeast".

My server made the initial pour, so I was only a party to the Crack & Glug, rather than being directly involved. It arrived with a finger of bone-white head with decent retention. Color was a deep golden-yellow with NE-quality clarity. Croesus, Midas and Mammon were all back in my kitchen, so I had this beer all to myself. Nose was both hoppy and spicy, grapefruit and pepper. Mouthfeel was medium and the taste was really reminiscent of an AIPA with a great bitterness on the tongue. The finish evinced the black pepper of the rye, giving it a cool, almost minty, finish. Wow! The finish was very dry and since I still had a half of a CAN left, I went with an aggro pour to really release the esters and now the pepper took on a prevalence not initially experienced. Great stuff!

Pours a nice yellow color, nice carbonation, with a pretty nice small off-white head, which leaves some sticky lacing behind. The nose is hoppy, malty, yeasty, with some citrus. The taste is hoppy, malty, citrusy. Medium body, with a nice dry/bitter finish. Overall, a pretty tasty brew.

12oz can. Poured out a reddish color with a small, white head of foam. It smelled of citrus, pine and spices. Nice citrusy bite with spicy rye flavor. Good toasted caramel and toffee finish.

I bought this in Estes Park, CO at a local liquor store. I asked for local beers and he pointed me to this.

A: All I had was a plastic tumbler but I could see it pour very pale with a head that quickly dissipated.
S: Slight hops and not much else.
T: Hops. Good hops.
M: Creamy but not thick. Good and full.
O: A pleasant Rye Pale Ale. Quite heavy on the hops, maybe to the exclusion of all other flavors.

Pours a clear golden with a thin off-white head. Smells like fresh bread and a hint of citrus. Taste begins with some hints of mint, spicy rye, then crackers, followed by some grapefruit and pine. Good mouthfeel. Overall a very nice rye beer.

12 oz can served cold into a pint glass.

Bridal Veil is a pale golden yellow color with a slight haze. Great lacing left behind.

Aroma is fresh and hoppy with pleasant citrus tones.

Flavor could also be described the same way but with added peppery spice from the rye malts.

Mouthfeel is medium bodied and nicely carbonated. Good balance for an IPA.

Pours a small off white head with a nice long lasting lacing above a clear warm golden colored beer.

A dryish aftertaste with some of the citrus hops sticking around on this medium bodied beer.

A pretty good tasting pale, I recommend giving it a try.