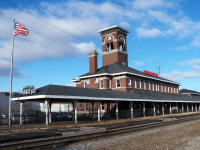 Rated by travelguy from Ohio

Reviewed by CisPiece88 from Nebraska

3.68/5  rDev -10%
vibe: 4.5 | quality: 3.75 | service: 3 | selection: 4 | food: 3.5
Cool exterior with a cool and wide open interior. Long bar with seating along with many tables for seating. They do have pinball machines and a rooftop patio which i was unable to see while I was here. The beer was pretty decent but the service behind the bar was pretty mehh. Bartender just seemed like he didn't want to be there. Overall was expecting better beer from such a big and nice looking place and a brewery thats won many medals for their beer.
Aug 29, 2020
Rated: 4.18 by B-rett from Wisconsin

Reviewed by Foxman27 from Iowa

Rated by SSGCujo from Wisconsin

Rated by Peepskp from Wisconsin

Reviewed by atone315 from Wisconsin

4.54/5  rDev +11%
vibe: 4.25 | quality: 4.5 | service: 4.5 | selection: 4.75 | food: 4.5
Stopped in here with my wife and our 2 nephews after a Lambeau Field Tour on a (rare) warm and sunny May, Saturday afternoon. Driving up,it's instantly recognizable as a restored train depot, with the dead giveaway being the still active tracks right next to it. Seeing as though it was above 60 degrees, we sat outside (that's how we roll in WI!). Great patio area, probably room for 80+. Seeing as though it was mid-afternoon, and we had plans for dinner, we ordered a few appetizers, a flight of beers ($15 for a sample of every beer they had, 13 beers plus a sample of their root beer) and a few sodas for the kids....they had root beer, cream, grape, and orange, all of which were made on site. Most of the beers were damn good, only 2 or 3 were not to my liking but all were done well. The sodas were also pretty damn tasty. The food also was good. One of our apps was called brats, brats, and more brats....highly recommended!!! Overall, would love to re-visit and maybe even get a chance to stop at their taproom across the way....if you are anywhere near the area, this should be a must visit!
May 17, 2015
Rated: 4.05 by bowzer4birdie from Illinois