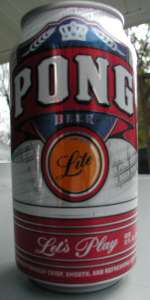 Reviewed by DA84 from Connecticut

1/5  rDev -60.5%
look: 1 | smell: 1 | taste: 1 | feel: 1 | overall: 1
This is the worst beer I have ever had in my entire life. It's after taste is almost sour like it were fermented from some kind of fruit. I bought a 30 rack of this because it was on sale for 11 bucks. I figured I'd bring it to my softball game where bud knight and twisted tea are featured on a regular basis as the cream of the crop. I couldn't give this away. The discerning palates that choose miller high life wouldn't drink this piss. I hope this is justification enough for my review
Jan 26, 2015
Rated: 1.75 by amalburg from Michigan

Reviewed by matts226 from Delaware

4.34/5  rDev +71.5%
look: 4.25 | smell: 4 | taste: 4.5 | feel: 4.25 | overall: 4.5
I am a college student who tried Pong Beer for the first time the other day and loved it! It tastes way better than that nasty natty and keystone. I had never seen it before until I walked into my local store and saw it on the shelves. it was priced for $15.99 and came with two free pong balls. who would of thought you'd ever see pong beer ..we play it all the time so me and my frat brothers bought a few cases for a big end of the year party we just had and went thru it in seconds..its great for case races and flip cup! I’m looking forward to drinking ice cold pong all summer long and i know my fraternity will be partying with it when we get back in the fall
Jun 06, 2013

1.15/5  rDev -54.5%
look: 1.5 | smell: 1.5 | taste: 1 | feel: 1 | overall: 1
I created an account on here because of the positive reviews I'm seeing on this beer. I have been working at a beer distributor for years and I can honestly say that this is the worst beer that has ever came in our store. Immediately I was turned off by the marketing. The beer comes with pong balls with makes me think that this is one of those beers that you just slam down to get drunk, and also promotes binge drinking.

When you pour this beer into a glass, it looks like watered down urine. Not very foamy.

The smell is almost like a coors light to me, nothing special.

The taste is what I really wanted to review. The taste is absolutely terrible. When we first got the beer at our store, we opened a 30 pack to try it out. All of the workers tried it, and none of the workers finished a whole can. The taste is almost water like (which is probably why it's called pong, so you can slam a bunch in a short amount of time. It also tasted a little skunky. The aftertaste is terrible and makes you put a piece of gum in your mouth immediately afterwards. Also, for a light beer it is actually hard to choke down and leaves a heavy feeling in the stomach. If someone offered me one when I was really drunk, I'd still turn it down.

Basically this is a crappy beer that is marketed to a college- age crowd for people looking to get a quick, cheap drunk if they can choke it down. Terribly terribly disappointing and not worth the $15 it sells for here.

4.92/5  rDev +94.5%
look: 4.5 | smell: 5 | taste: 5 | feel: 4.5 | overall: 5
Light lagers are difficult to brew on a consistent basis PONG BEER
brewed by City Brewing in Latrobe PA., has a consistently pleasant flavor with a incredibly smooth finish. This light lager is among the best i have ever tasted. Then served very cold it is refreshing and holds it own on every light lager among every other light lager beer. Also it color is very pleasant.
Jul 08, 2012

A: Pours a very light straw color with perfect clarity. The head, in true light lager fashion, sucks, and fades to nothing in no time flat.

S: Quite grainy, with a mildly unpleasant sweetness, almost like cotton candy.

T: More or less flavorless, with only a light grainy 'ping' and cotton candy sweetness noticeable on the tastebuds. Actually a little worse than I expected, in fact it even manages to fall into that sweet spot of having bad flavor and no flavor at the same time. Yeesh.

M: Very strong carbonation, with a watery texture and finish. It should go down easily, like water - so why doesn't it?! Maybe it's because of how oddly heavy it is, in spite of its wateriness. It becomes more drinkable as the carbonation calms down, though - damn me and my occasional acid reflux.

O: At least it was only 99 cents...actually no, this can was 99 cents too much. It's a tick, I suppose, even if it was a pretty nasty tick. For the record, I wouldn't play beer pong with this beer, even if the 30 pack comes with some cool-ass pong balls.

From the CAN: "Let's Play"; "Brewed using only the finest natural ingredients to produce an exceptionally crisp, smooth, and refreshing light beer"; "Check us out at www.pongbeerusa.com".

I did not participate in Beer Pong while in college as I was a 34 y/o Navy vet when I began school and it just did not have the same appeal to me as it did for many of my classmates. Oh well. I am not going to take the moral high ground, either. I do not care how it is marketed or what it is named. That is for the Feds to decide between right and wrong. I am interested in beer and especially beer in and from a CAN, so this qualifies. Onward!

The Crack & Glug was right out of the Greg Koch playbook, but sissy or no, I was drinking it! Not only was the beer itself fizzy, the two fingers of bone-white head were equally fizzy, if not more so and determined to Snap, Crackle and Pop! their way out of existence. Poets have long waxed about the fleeting lifespan of many things in nature, but I am unaware of one about foam atop beer. The beer itself was a light lemon-yellow with NE-quality clarity and loads of CO2 bubbles in evidence. Nose smelled of corn, dry cleaning fluid and bubble gum. Oh no, I hear the heavy tread of the Cybermen as they come to try and CANvert me into one of them through some unnatural beer! Mouthfeel was thin-to-medium and the taste was actually rather bland, which was surprising, given its nose. Finish was light, ethereal, the gentle flap of a butterfly's wings and I no longer heard the Cybermen, so perhaps I was wrong. This was just an unobtrusive light lager designed, I am sure, as a marketing gimmick. Have at it, kids!

Reviewed by Buggies from Pennsylvania

For the style, and noting that light lagers really aren't much to talk about, it really is a nice little beer. These 30 packs are going for 2 for $20 in my neck of the woods. Don't get this if you're a snob... it will not please you. But if you're having a bunch of folks over your house for a picnic including your favorite backyard game such pitching horse shoes or playing corn hole (or pong I guess if you're into it), get this.

It tastes as a light lager should, it's cheap, and it has a fun theme to it that adds that little extra fun to the party.

2.53/5  rDev 0%
look: 3 | smell: 2.5 | taste: 2.5 | feel: 2.5 | overall: 2.5
I'm slightly embarassed that a professional brewing company would market their beer in such an unprofessional manner- to promote a game that encourages a higher rate of consuption beyond that of simply enjoying a beverage.

Having said that, this American Light Lager pours as most do- a lively carbonated medium straw color and with bright clarity. The heavy use of cereal grains causes the fizzy white head to fall very quickly without the malt and proteins necessary to establish or hold a meaning full foam stance or lace.

Cereal grains about, and with the floral component of European hops. I'm actually surprised to find a pleasant hop note to accompany the shy malt scent and heavy sulfury-sweet corn aromas.

Flavors are the expected light-malt, heavy-cereal grain taste that adjunct-riddled lagers share. Light acidity and sulfury notes remind me of apples and raw barley but without being necessarily estery. Lightly herbal and grassy from hop additions, the hops very shyly establish the spicy bite required for balance. Thus the beer falls flat with a taste of corn, grainy-sweet finish and aftertaste.

Medium bodied for a light beer, this beer is heavier and sweeter feeling than the style perscribes. Majorily empty past the initial taste, the beer's carbonic bite creates as much dryness and closure to the beer as does any clean bitter balance, alcoholic warmth or dry-maltiness.

In the end this is the mundane run-of-the-mill American-style Lager. A bit rich for a Light Lager, but when reaching for any of these souless beers, just choose what's cheap. You won't miss the flavor differences in any of them.

Reviewed by jaredhall from New Jersey

3.5/5  rDev +38.3%
look: 3 | smell: 3 | taste: 4 | feel: 3 | overall: 3.5
I purchased a 30 pack of 12 oz cans. Each beer was either drank from the can or red solo cups. The feel and graphics of the can was very nice. The beer tasted smooth and crisp and instantly refreshing. The beer was very carbonated like most light beers. The beer does not lose its carbonation at the last drop either which is a nice feature. I think this is a great alternative against the other 30 packs of light beers. Would I pick this over Keystone or Busch Light? Yes and it also comes with free balls. Would recommend this for anyone that is looking to supply good cheap beer for any social event Beer Pong, Tailgating or even flip cup. Pricing was very affordable and it is definitely worth trying.
Dec 14, 2011

Reviewed by TGIF722 from New Jersey