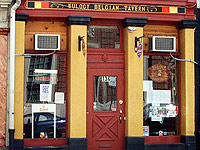 View: Place Reviews
Reviews: 150 | Ratings: 216 | Log in to view all ratings and sort
Reviews by Andreji:

So, you've finished the USMLE step 2 CS exam and after 8hrs of seeing pretend patients you don't feel like any more sightseeing.

So you take up on wandering through the city and towards the easternmost part of chestnut what sign do you spot?

So I went in and grabbed a table right by the window. it was closed and had some heavy curtains right by it, making the place quite scarcely lit. not very full at 5pm I'll say. Long bar, not too noisy, music was moderate. a stairway leads somewhere. It looks dusty and old but in a comforting sort of way. this place is probably similar to In de Wildeman or maybe Poechenellekelder for a comparison. Very à la Belge.

Was instantly served by the waitress, a nice young girl who devoted her attention essentially to serving me and another couple of folks. she had a friend sit by her and they chatted at times but never in detriment of service. She also knew her menu well and was frank in saying "we really don't have many locals- this is a belgian bar- but this is good...." and gave frank and seemingly knowledgeable advice: she told me to have this or that if I prefer sweeter than bitter, etc.

The menu is beautiful. several pages of a phone book-like menu probably ranging in the 200-300s. Of course mostly belgian but a fair share of local and american crafts pop out of there. They used a rating scale on the menu-chart for each beer on a 1-5 scale so I assumed it was the BA ratings, but I may be wrong.

I don't know if i'm overrating the place. It felt pleasant and adequate, beer focused enough and laid back, relaxed environment to taste beer and to clear my head post-stress. I'll definetly hit it again when back in Philly.