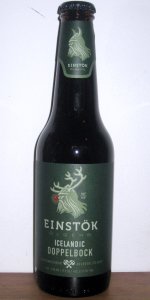 Notes: The 2015 version of this limited-edition seasonal is only available through the holiday season, but this winter celebration brew is worth the wait. Malted barley and chocolate tones define the traditional style, while the robust aroma and long, mellow finish make this the perfect companion for holiday adventures. Get it while you can.

Poured from a bottle into a pint glass
Appearance – The beer pours a dark brown mahogany color with a tiny tan colored head of foam. The head fades very fast leaving just a trace of foamy lace on the sides of the glass.
Smell – The aroma of the brew is mostly of a roasted malt smell mixed with some aromas of molasses and caramel. Along with these smells comes a little bit of a roast and char smell.
Taste – The taste begins with a super sweet and malty taste that has tons of molasses, caramel, and toasted malt flavor. These tastes create a base flavor of the brew and last throughout, but are joined by some other tastes of a light stone fruit (cherry, plum, and prune) as well as a touch of grass and hay. These tastes take the flavor profile to the end, and are joined by a touch of smoke and char, where one is left with a sweet and roasty/toasty taste to linger on the tongue.
Mouthfeel – the body of the brew is average in thickness and creaminess with a carbonation level that is rather normal. A little thicker body may have been slightly better for the style and flavors overall, but in the end the feel was pretty decent.
Overall – A very sugary sweet doppelbock. This would make for a nice dessert style brew.

Not too heavy on the stomach. Nice pleasant taste and sweet aroma. Great for a relaxed day.

Pours a dark brown with a decent off white foamy head that is about half a finger length high, the white/brown lace is creamy and retains well.
Strong aroma. The fruity esters hit me first. I'm thinking strawberries or raspberries. I also detect malty and caramel sweetness. As the drink gets further along, a strong combination of coffee and cocoa take over.
Taste is quite pleasant. Roasted malty sweetness pervades along with toasted dark bread. A mild hops finish balances out the sweetness perfectly resulting in a slightly bitter after taste. Also some hints of alcohol flavors become prevalent towards the end of the drink and as it warms.
Nice creamy and smooth feel. Low carbonation but just enough. Light to medium body; it feels like a heavier lager.
This is not the most complex or robust doppelbock I've had, but it really does the job nicely. A nice winter warmer drink. Also, my first brew from Iceland. Not a bad introduction.

Copper-colored and quite clear. Two-finger, off-white head with decent retention. The smell is off-putting: vomit with a hint of soap. It is not a strong aroma per se, thankfully. None of the traditional toasted, caramel aromas of the type come through, nor any chocolate. Although the unsavory aromas did not come through in the taste, it is lacking depth. A noticeably thin mouthfeel doesn't help the lack of sweet maltiness associated with Doppelbocks Unfortunately, just bland and boring, though certainly easy to drink.

12oz bottle. 2/8/16 bottle date. Appearance: Deep rich ruby red, brilliantly clear, with a moderate off white foam head. Aroma: Toast, caramel, chocolate, and a touch of black cherry. No noticeable hop aromas. Taste: Rich bready, toasty, and molasses malt sweetness. Bread crust really stands out on the swallow, with a touch of chocolate. Minimal hoppiness just enough to prevent the sweetness from being cloying. Mouthfeel: Medium to heavy bodied with some syrupy quality, and a low carbonation. Finish: lingering bread crusts and touch of chocolate. Overall: Decent Doppelbock that is heavy on Munich malt character of toasted bread crust, but seems to lack the malt complexity of German versions that have a rich dark fruit flavor. Beer seems a little thick and syrupy, which throws off the balance a bit, likely due to the age of the beer