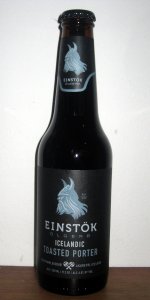 Notes: With notes of coffee and dark chocolate, this porter is roasty and rich, with a robust, yet smooth body. Toasted malts give it a sinister black color, but its crisp taste will have you believing that there’s no more need to be afraid of the dark.

View: Beers
Reviews: 147 | Ratings: 653 | Log in to view all ratings and sort
Reviews by BEERchitect:

Pushing the porter into the roasty world, The Einstok brewers take the Engish brown porter and give it a bit of Icelandic heft with local coffee.

Dark brown but not crossing over into black territory, the Iclelandic Toasted Porter crowns with a sturdy tan cap and strikes the nose with earthy, dark, roasted coffee. But an undertow of caramel, toast and nuttiness brings the porter into play. Sweet on the front of the tongue, the taste of caramel, chocolate, candied nuttiness and a savory molasses-like richness.

And as the sweetness slowly drifts away from the middle palate, the toasted, nutty and savory aspects of malt remain and give the coffee the complexity that rounds out the bitter edges of roast. Cocoa and coffee grounds bring a walnut-like bite and a tar flavor to the late palate while the beer's stone fruit character emerges with a bock-like character.

Full bodied but lightened by the tannins of coffee and toast, the taste suggests something larger but the beer's texture is just a notch above being called drinkable. Sipping and savoring is the demeanor of the session as the ale hosts a wealth of nuanced complexities that hide underneath the earth, ash and char.

I am not sure why this beer is rated as low as it is. This is one of the best beers I drink. This brewery has perfected their malt roast process to produce a truly toast flavor as opposed to a roast flavor. Amazingly drinkable beer with complex and unique flavored.

Poured from a brown 11.2 oz. bottle. Has a black color with a 1/2 inch head. Smell is of coffee, some chocolate. Taste is black coffee, light chocolate,hints of smoke, easy drinking. Feels medium bodied in the mouth and overall this is a decent beer.

I can't think of a better session porter that I've ever had.
It's both smooth and rich whilst not being sweet and the finish and nice and neutral.
Very chocolatey with hints of coffee and liquorice. I could drink this by the half dozen!

Mellow, toffee ,chocolate, and coffee aromas. Pours to a VERY dark almost black hue. tastes much of caramel, and toasted barley, lingering coffee flavour. Pleasant and would recommend to anyone who is into porter.

Dark charcoal brown with minimal head. Malty nose with a hint of coffee. Very smooth and light-bodied for style. Hints of char, fruit, and coffee with a hint of coconut/oak mingling. Residual sweetness. Easy to drink and enjoy. Worth buying if you can find a six pack for $10.

I really like this beer. So few good, dark beers at the beer shop nowadays. Poured with about a 1-2" head. Opaque and coffee colored. Light bulb doesn't even shine through. Smooth and creamy, malty, bitter taste with only light carbonation. Very good example of a dark beer without all of the extra flavors. It isn't a chocolate-salted-caramel-coconut-peanut-butter porter. Just a really nice dark porter. Will be buying again.

Aroma of roasted malt and medium roasted coffee. There's something in the background giving off a fresh, lively scent which I first thought was hops but later believed it's more like freshly brewed coffee.

Taste is roasted malt and coffee. That's it but they are clear, distinct and good tasting flavors. I could add roasted nuts but dark malt and coffee cover it pretty well.

Texture is medium which is surprising considering the brew's appearance.

This Porter emphasizes the coffee aspect which, according to the brewer, is real coffee added during the brewing process. Overall it's a pleasant, flavorful rendition of a Porter that could be a bit more robust.

I’m usually not a weather-oriented beer geek, yet I feel like this is exactly the beer I want or need with winter approaching. Einstök delivers a lot of flavor right from the start, with a lingering but subtle sweetness throughout that keeps the roasted grain character in check. Toffee and chocolate meet charcoal with a big toasty edge. The world needs more Porters like this.