Fear Of A Brett Planet
Round Guys Brewing Company 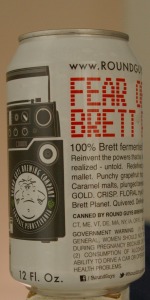 I don't know why this beer is reviewed/rated so poorly. I think it's amazing. Not a hop bomb, so much as a funky, tropical tasting little ale. I was surprised to see this listed on here as a pale ale, because it seems more like one of those beers that defies style labels.

Flavors are subdued all around, but I could drink lots of these and be happy without being overwhelmed. Hints of mango and pineapple.

Good body/ mouthfeel with a little pop of carbonation, that is lighter and another than many pale ales.

Round Guys Brewery "Fear Of A Brett Planet"
12 oz. can, no freshness dating

I was fairly surprised when I poured this beer as it was a mainly-clear deep amber/almost-copper beneath a full head of frothy off-white. I was expecting something golden, but the nose was even more surprising! HOPS! Citrusy (grapefruit as well as other tropical fruits), gently piney, resinous, slightly earthy - all over a decidedly caramelish malt base. Very odd for a Brett beer, although I guess you could argue that one of the original Brett beers, Orval, has some hops to it. Onward to the flavor... Very much as the nose suggests, but there is a bit of Brett in there as well, leathery and slightly metallic, with a bit of wet straw. I'm not sure where I stand on this, but there are no faults, and as you progress through the glass the tropical fruitiness and Brett notes meld quite nicely. Additionaly, as far as I know, it's pretty original, so points for that. Enjoyable start to finish, worth tryin' for sure!

When it comes to CANs and The CANQuest (TM), I have no fear! I am not a huge fan of Brett, but it does not bother me, either.

The Crack! unleashed a little spritz, so I decided to show it that I meant business by employing an inverted Glug. The trick to such a pour is knowing when to begin backing off. I have gotten quite good at this and so I ended up with just over two fingers of soapy, eggshell-white head that quickly began popping and burping and falling away to wisps, leaving nice lacing in its wake. Color was a hazy Amber to Deep Amber (SRM = > 9, < 13). Nose had Brett's characteristic funk, but it was not as pronounced as in some beers that I have drank. Mouthfeel was medium. The taste was tart and funky, but again, not as pronounced as in some Brett beers that I have tried. Here, I was getting sour apples, grapefruit zest, lemon peel, light sweat to give you an idea. Finish was f**king tart! I felt my lips puckering tight. It looks as though I will not be playing the trumpet later.

Appearance: Arrives with an amber verging on golden color and is capped by a sturdy head that leaves some shards behind

Smell: Tropical fruit tones and a touch of Brett funk.

Taste: Light bready malts support the peach and passion fruit fruit flavors; the Brett builds, after the swallow, to complement the fruit; the finish is relatively dry

Overall: I like the balance here between the Brett and the tropical fruit

Poured into a standard pint glass, color is amber, head is light tan, presents thin, light bubbles on the glass.

aroma is pretty much all malt, some light off notes from the brett but very feint, pretty good earthy hop aroma.

Taste is very good, maybe a hoppier, dryer version of fat tire comes to mind as something remotely close. Malt is clean caramel notes and hops are simple and earthy with light citrus and lemon notes that could be from the yeast. Brett character is subtle in the mouth but provides unique presence and flavors.

Poured from a tap at TJs in Paoli PA.

A: A medium brownish red color with a one finger slightly off white reddish head. No glass lacing.

S: Herbal and citrusy with some hay, must and slight caramel sweetness.

T: I get the hoppy flavors up front that are herbal and grassy in nature. I get some slight citrus also. This mixes quickly with the darker wet hay and must flavors. A slight malt sweetness lays in the middle before the finish. The hops create a slight bitterness at the end as it finishes dry and crisp. A word of note, let this one warm up and the brett and funk get more prominent. Totally different beer, I like it.

M: Light to medium, funky, no alcohol and nice carbonation.

O: This is a totally different take on a brett beer. It's lighter in body and way more easily drinkable than say a Matilda since it's APA based, but it is still a really great brett beer. As I said, let it warm and you will be rewarded.

I really enjoyed this beer. I don't know anything about these guys, but this beer was very good and will get me to try more of their stuff. Really terrific beer if you like brett.

-can to duvel chalice.

O: Drinks like a belgian pale, nice touch of sour funk citrus from the yeast, the brett increases towards the end of the drink, dry and funky. very good overall.

Brett thinned out all flavor.