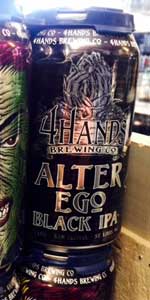 L: black in the glass with a finger of brown head.
S: pretty big citrus aroma and sweetness
T: smooth, sweet citrus with the hop bitterness to remind me that's it's an ipa
F: goes down easy, thin and sessionable. Finishes dry and bittering
O: it's ok, local and sessionable though.

this is a very nice black IPA. Dark, with a citric scent and a plight tan head. Intense aroma. Lots of hops...pine and grapefruit. Similar tase with some dryness. Roared undercurrents and a firm mouthfeel. Excellent.

To make a long story short, there's a vegetal component to this that makes me think of tomato stalks; nor do I really get the citrus that other reviewers have found (there's a little, but I find it hiding behind the grassy, vegetal, earthy, and peppery character). I was expecting hops, but what I got was more like spent hops dumped into a garden plot at the end of summer following a soft rain. Beyond that on the up-side there's a pleasant, fairly well-balanced (although slightly acidic) maltiness that's darkly chocolatey and subtly roasty. Some piney and minty hops appear in the finish along with a lingering bitterness. Perhaps I've just found the aroma unusual, but it doesn't work for me.

It's odd with 4 Hands BC - we get distribution here in PA, but it is scattered to the point that I CAN find some in PHL, some in LNC & still others were returnees with me from CHI. I dig the graphics on the CANs & I am anxious to CANduct a horizontal tasting/review of their CANned beers. When it is over, if you know of a CAN of theirs that I missed, let me know.

This has got to be among the top ten CAN graphics that I have encountered! It looks like Two-Face from "Batman" or Haf & Haf from "Dick Tracy"! The colors just jump off of the aluminum cylinder. Wow.

I Crack!ed it open, poised for anything to happen, but nothing of note occurred. I gave it a very gentle Glug so as not to anger the imposing face glaring out at me from the opposite side of the CAN. A moderate swirl raised a finger of foamy, light-tan head with moderate retention. Color was Very Dark Brown to Black/Opaque (SRM = > 34, < 44) with NE-quality clarity & mahogany highlights. They called it "Black" on the CAN, but it was not that dark, hence less-than 44. Nose struck me as odd, as it usually does in the Dark/Black/Cascadian IPA style. It had a mintiness along with a charcoal smokiness that combined to create a slightly medicinal smell. Hmm. I always try to keep an open mind, but I an not enamored of the style. Mouthfeel was medium, approaching fullness. The taste was better than the nose had led me to expect, thankfully. It began with a very pleasant minty wintergreen hoppiness, but it was quickly overshadowed by the deep roastiness of the malt. That is my usual hang-up: the malt tends to get in the way of the more delicate hops, ruining the experience for me as a self-avowed hophead. Finish was dry and interestingly, it ran in reverse. I could taste the smoky roastiness very deeply at first, but then the mintiness of the hops began to return well after the swallow. Not bad, but just not my cuppa tea.

Black in color with minimal to no light penetration. A fingernail of beige covers the top. Moderate Brussels lacing. I smell piney hops and pumpernickel bread. The taste is a blend of piney hops and dark malt. There's initially the bitter hops and then it swings back to sweet malt. The mouth is lightly sticky and chewy.

A - Poured out an opaque, jet black color with a two-finger, tan head of foam. It left sticky rings of lace on the glass.

S - It smelled of pine and roasted malt.

M - It was crisp, sharp and smooth. A medium bodied ale.

12oz can, no apparent freshness date
A - thin beige head on top of a deep mahogany body
S - coffee, roasted barley, pine, grapefruit zest, faint anise
T - both roasty and bitter with chocolate, coffee, pine, juicy grapefruity hop, and anise in the mix
M - medium, resinous, finishes with moderate bitterness
O - this one didn't wow me. It's good, and I'd buy it in a pinch but there are many other black ales I prefer over this one.

MNishCT77 from District of Columbia