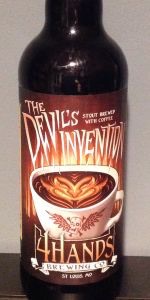 Notes: The Devil's Invention is a full-bodied stout brewed with coffee. Inspired by one of the early nicknames for coffee, "the bitter invention of Satan", this stout has a bold, chocolatey aroma with complex notes of coffee and a smooth, sweet finish. The Devil's Invention pours black in color with a tan head.
View: Beers | Place Reviews
Reviews: 35 | Ratings: 179 | Log in to view all ratings and sort

Sweet, but there's enough balance to make this palatable. A nice coffee stout.

What coffee? Smells of raisins, tastes of raisins. A bit on the sweet side, zero coffee smell or taste. Medium mouthfeel. Would not buy again. I've found 4 hands stouts to be consistently disappointing.

They say that the devil its in the details. But at the 4 Hands brewing company, he's in the brew kettle as a big and bold stout is born and then blended with the finest coffee they could find for a deep, dark and roasted taste that can only be described as devilish.

Nearly straight black, the brownest of brown The Devil's Invention builds a tall mocha froth and lures in the nose with dark chocolate, dark roast coffee and sweeter toffee scents in an impressive mocha latte way. A fairly bold set of sweetnesses greet the front of the tongue with the malty likeness of toffee, caramel and cream.

Yet as the flavors unfold, the sweetness soon gives way to the roast. Deeply roasted coffee is that of French pressed character and a shade off of espresso. Bittersweet chocolates, black walnut and a faint drift of campfire trickles across the middle palate and into a late taste of woodsy bitterness and a fine kahlua spice.

Full but relaxed, a mild nougat-like creaminess pulls from the creamy taste and supports the generous coffee additions with an element of vanilla and malted milk. A finish of coffee bitterness is outlasted only by an aura of campfire and chocolate once more in a retro-olfactory action.

Pours a dark chocolate blackish brown.
Decent darker tan head at 1st pour then nothing as beer settles. No lacing.

Taste is bitter espresso upfront. Then followed by heavy chocolate, along with the charred malt on the finish.

Body is thin to medium. Carbonation is light. After taste and mouthful is slighty sticky and dry.

Another well done coffee stout. I'm a fan for sure!

these just dropped again and I instantly jumped on a pack. still cool on the shelf from being on the truck that morning i imagine. love the artwork. dumped a can into a tulip glass, big ol khaki head over some darrrk beer. mild lacing left. smell is a shot of espresso, and in fact everything about this beer screams morning cup of coffee. damn dangerous. taste has hints of char and chocolate that remind you it is in fact a beer. absolutely delicious. feels a tad thin for me but still coats the mouth enough and leaves you with a warming dryness. let's get this in some bourbon barrels.

I am interested in not only getting in a CANQuest (tm) entry, but also in delving further into my stash of Stouts. This will help me to do both.

From the CAN: "Stout brewed with Coffee"; "Pairings[:] Chocolate Cake".

Ah, the CANtinual CANundrum - Crack! & inverted Glug or Crack! & gentle Glug? In this insCANce, it was even tougher since it was a 1 pint CAN, which CAN be tough to CANtrol its CANtents once underway. I, however, am a professional & I wanted to produce a pseudo-cascade, so I went with the former. My efforts paid off as not only did the pseudo-cascade happen, but I also got two fingers of foamy, fizzy, deep-tan/light-brown head with modest retention. Color was Black/Opaque (SRM = 44), not only allowing ZERO light penetration, but its Stygian darkness was sucking the light out of the room! Oh, no, sorry. That was just a light bulb that burnt out. Nose smelled like rich, dark chocolate; black coffee; light smoke & a bready cake-like quality. No wonder they suggested the pairing that they did! Mouthfeel was kind of thin, especially for the style. The taste was very much of dark roasted coffee, underlain by a dark chocolate sweetness with light smokiness. Wow! I love coffee, especially after an abbreviated 15.25-year career in the U.S. Navy & I begin every day with at least a cup. I was in at a Middle School today & they do a fundraiser every Friday with the Life Skills/ES students selling coffee from a cart & you CAN bet that I availed myself of some. One of the kids overheard me ask for it "Black" & said something to the effect that he prefers his coffee like his women - French, Vanilla & sweet & I responded "Well, what does that say about me?" "Huh?" "Hot & black! I'm drinking coffee. Anything else is a hot milkshake or a hot soda pop." That ended the discussion. Man, this beer was rich! It was very evocative of my morning coffee, which has to be coaxed through the drip filter due to the amount of grounds, but at the same time, there was a LOT of dark chocolate coming through. Finish was dry, roasty, coffee-like with enough chocolatiness to make me want to reach for some chocolate cake as an acCANpaniment. Mmm.

Appearance: Pours fudge brown with a thick mocha cap; the retention is not great but there are gobs of lacing all over

Taste: Charred malt, with chocolate and licorice tones building; espresso arrives in the middle; the finish is bitter from both the roast and the coffee

Overall: A little too much roast here and rather uneven as the various elements clash rather than complement

Thanks, Reed, for the opportunity

16 oz. can. Pours very black with a huge khaki head. Smells of coffee, malt, some chocolate. Taste is miles better. Rich chocolate and coffee in equal portions. Aggressive coffee bitterness and roasted malt character. Bitter finish. Thick and chewy mouthfeel without being sweet or sluggish. This is fantastic.

Pours black with large tan head.
The aroma is very coffee dominated with a dark rich sweetness.
The flavor is more of the same, tons and tons of coffee with a molasses sweetness. The finish is char and maybe a little pipe tobacco.
The mouthfeel is about perfect, it's costing but not too thick to make this a sipper. I could drink quite a bit of this it isn't fatiguing.
Overall it's really good, if you see it pick up a four pack you won't be disappointed.

Smells great - lightly sweet and creamy, with chocolate and light roast coffee. Tastes similar - big but not overbearing coffee, dry roasty/chocolate/tobacco notes. Nice. Not overly sweet or complex.
Feel is dry and a little creamy. A tad thinner than I expected.

Smell is dominated by coffee. Roasted malts and some chocolate are there as well.

Taste follows the nose, dominated by coffee, with some chocolate, roasted malts, and a slightly sweet finish.

Feel is smooth and medium bodied.

This is a great stout, lots of bold coffee flavor. This is the third stout I have had from 4 Hands and they have all been phenomenal!

Deep brown on the edges and black in the middle. Clear to opaque with a brown tinted head that hangs around for a while.

Taste is espresso, cocoa, malt, and a nutty/earthy flavor.

Mouthful is on the lighter end of medium and soft. Carbonation is average. Finish is semi sweet.

Smells like a standard stout with a hint of coffee added.

Aroma does not do this justice. Huge, roasty, dark coffee, espresso bean flavor right up front seems to dwarf the malt making this seem more like a brown ale or porter. Burnt molasses sweetness. Finishes with a dry, roasty malt character, earthy hop and lingering coffee.

My neighbor was kind enough to share the Devil's Intention with me. It poured an opaque black with tan head that left a nice lace. The scent was coffee roast. The taste was also heavy on espresso with enough sweetness to balance. The mouthfeel was lighter in body with smooth carbonation. Overall the is another solid beer from 4 Hands.

Pours black with a lovely medium-sized caramel colored head. Head retention is moderate with a great deal of lacing left behind. Aroma is composed mostly of roasted malts with hints of coffee and cocoa. Taste follows suit with roasted malts, and a bit of chocolate and coffee. There is also a twinge of toffee. Despite the name and label art, I do not find the coffee to be very present in this brew. Mouth feel is pleasant, with a medium consistency, and smooth drink-ability. Overall, a fine beverage, but the coffee is a bit lacking. Of course, I'm a huge coffee fan, so perhaps your experience will vary.

Poured from a 22oz bomber into a snifter. Acquired as an extra in a trade.

Pours a deep brown body, clear on the pour but once it's in the glass it's dark brown nearly black.

Aromas of heavy coffee beans, some vanilla, chocolate. Same thing on the tongue, lots of coffee, not roasty but beans, a little light on the body, slightly watery and overcarbonated, but the flavors are great.

Overall I did enjoy this beer, coffee is intensely present, body is a bit lacking, but overall tasty

Reminds me of Lagunitas' Cappuccino Stout, but with moderately less sweetness; not as much of a straight black-coffee taste (like Stone's Americano Stout) as there is just a touch of sweetness that keeps it from being overly bitter.

Really solid cold brewed coffee taste, but finishes a lot more bitter than I like. The mouthfeel was also disappointingly thin. I expected it, but this one was just more thin than I wanted.

It says to pair it with chocolate cake. They are right, I guess that's why it's on the bottle. Terrific taste. I wish I could add more characters to fill the minimum...oh wait I did it.