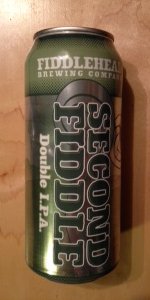 Notes: Extensively dry-hopped, Second Fiddle is second in name only. Big, juicy and aromatic.
View: More Beers | Place Reviews
Recent ratings and reviews. | Log in to view more ratings + sorting options.
4.5 by Budlum from Maryland on Sunday at 06:50 PM
3.66 by LEIGHJ888 from New York on May 10, 2022

16oz can courtesy of Rub_This_BBQ. My first from Fiddlehead. The date stamped on the bottom of the can indicates it was canned on March 15, 2022. Just above the date, the word "Lotus" is stamped. Mystical and mysterious.

Poured into the glass, this was a slightly chill-hazed golden shade of amber. Big, creamy looking off-white head. Lots of lace.

Juicy, citrusy hop aroma. A little bit of breast maltiness, but the hops are the stars of the nose.

A little more malty in the taste than in the nose, but not to the point of being a deal breaker. Juicy up front, with accompanying notes of grapefruit and general darkness, with a slightly peppery, spiciness. That pretty much carries through to the finish, which is fairly dry for a DIPA.

Fairly good sized body for an IPA, but, hey, it is a double one, so that's not exactly shocking. Oily and slightly creamy mouth feel.

Really solid juicy DIPA that turned out to be neither mystical or mysterious (are those qualities really necessary when you're reaching for a big hoppy beer?) despite it's proclaimed "Lotus-ness," but made up for that by being very enjoyable. I'd happily drink on a regular basis if it was a local option, and it's absolutely hitting the spot after work tonight. Thanks, Bill!

This is a top-notch double India pale ale in the west coast style. Everything about it is above average with some pretty exceptional looks and mouthfeel overall. A great beer all around to begin with and better than the sum of its already impressive parts.

Pours a golden straw color with a big two finger head. The nose has notes of citrus, pine and some grassiness. The flavor profile is modestly earthy with some background grapefruit and a solid dose of piney goodness on the finish.

An outstanding NEDIPA. One of the best, a great balance between juiciness and bitterness.

Appearance is hazy yellow, translucent, the color of straw. Light head that dissipates quickly, leaving light lace around the rim.

Smell is juicy. A nice balance promising grapefruit, stonefruit, some citrus, a little pineapple. This is not a juice bomb like Widowmaker Blue Comet. The juicy nose is moderate.

Taste is a perfect balance of dry-hopped grapefruit juiciness but with mellow bitterness. This is definitely a dry hopped beer and a great one, but is not a juice bomb. Sometimes you're in the mood for a real, hit-you-over-the-head juice bomb that rocks you back on your heels with grapefruit and citrus, like Widowmaker Blue Comet. Second Fiddle isn't like that. This one is more of a thirst quencher rather than a juice experience. Goes down more easily than the 8.2% ABV would have you believe. A great beer after a warm afternoon (or anytime).

Thanks to Roguer for this one. 16oz can (dated 11/14/21) poured into 14oz teku. Poured a hazy honey-gold color with 1-1/2 inches of white head that had moderate retention and very light lacing.

Similar on the tongue, with the hops being sharper, with a bit more bite, and good bitterness on the finish.

The body was a touch fuller than medium, slightly coarse, and had a mildly sweet finish that dried out significantly after a moment.

Drinkability was very good, a beer that could be in my rotation if local.
Overall, a nicely made, and nicely enjoyable, example of the style. Certainly worth your time if you see it.

This was sent to me as part of an LIF. Thank you Andrew!
Poured nearly transparent bright brass colors and formed a bone white head about an inch tall. Nice looking beer.
The aroma was mostly pine and fruit like guava or apricot. Pleasant smell, really made me look forward to drinking it.
The taste was very good, just not quite as good as the aroma. Dankness abounded with malts playing second fiddle and the aforementioned fruit was just essence in my imagination.
The feel was good, very easy to drink this and it feels good!
OA, I really enjoyed it, wish its flavor was more like the aroma but it is still really good.

Aroma is piney and earthy. Less so fresh pine and more so aging pine. Smells like the woods on a late fall afternoon to be honest. Taste falls right in line with the aroma - with lots of fresh bready malts on the retronasal. Feel is a bit thinner than I expected with this smell - usually these beers can be a little thicker with a syrupy character. That being said, it makes this very easy to drink. Carbonation is medium. Overall - I was happy to finally try this. So many other beers and alternate IPAs have come out since this was introduced, but I can see why this is ranked so highly. Old school DIPA fans should like this one.

Pours slightly cloudy but not quite that thick, turbid NE ipa look. Smells and tastes dank, not too fruity. More earthy hops flavor. Reminds me of Carton’s 077XX, another favorite of mine.

Pours a clear light amber with a small head. Smell is mild, mostly citrus and pine. Get some grass, hay, and pine sniffing right from the can.

Taste is somewhat along the same lines. I get a fair amount of citrus, mostly lemony, and a fair amount of pine or grapefruit zest. But I also get a little bit of bubble gum or melon. Nice resinous bitterness on the finish. Something familiar in the flavor -- maybe like a lemonhead lemon/sweet vibe almost? Something along those lines.

Pours a little less than clear (not a hazy IPA) with a light brassy color and short head that had low-to-medium retention. Nose is on the piney side, some citrus and a bit of dankness, but mostly pine. Taste is softer than what I'd call "old school IPA" but still has those classic flavors...again more pine and some citrus. Overall, a very well constructed beer. However, I have no idea why the average is currently 4.46 for this beer. It is very good, but not mind blowing.

oh my lord... the hops are strong in this one! and sweet! and vermont-ish.... old time classic, for sure!

Pours a hazy, nearly opaque, yellowish orange with about four fingers of white head. Incredible retention and lacing. A big lump of foam is still left in the middle of the glass after several sips.

Smells of pine, resin, citrus and a bit of pineapple. Smells much juicier on warming.

Tastes of strong bitter pine with a background of citrus. Ever so slight hint of alcohol. Pine really comes through on warming.

One of the best tasting fresh beers I've ever had (with an extremely high alcohol content on top of things). Tastes very fresh, with pine and fruit flavors. Splitting a 4 pack is enough for a good night.

Apparently, I have never reviewed Second Fiddle. That's weird to me, because I first had it probably seven years ago when I first visited Fiddlehead and they had tapped it just before I had arrived. Of course it was fantastic then, living up to my expectations in every possible way, but every time I've had it since then... I must say I've been kinda let down. This batch, however, is from 5/14/21, and is definitely the highest-quality canned batch I've had! It easily eclipses every prior SF iteration I've consumed, and thus I believe it is a fitting entry for a review.

The pour is, honestly, way clearer than I remember. I don't think SF has ever been a super hazy beer, but this is like 90+% clear, building up a decent head of bone-white foam with a chunkiness that stands in rather stark contrast to the clear golden beer below. It leaves behind a fantastic and consistent trail of lace around the entire glass, and the legs themselves are pretty nice as well. Body is like a light orange/caramel color with plenty of suspended solids if held up to direct light, meaning it's definitely been centrifuged... still not completely "clear" but not quite hazy/doughy NEIPA realm stuff either. This looks just great.

The nose has this insane deep pine-cone like scent that just smacks of "old-school IPA" but also contains lots of fun, fruity esters as well. Mango and tangerine with hints of guava combine with West Coast pine and grapefruit funkiness... it just jives super well. This is definitely the best and most cohesive batch of this beer that I have personally had since they started canning it. It's bringing me back totally to the first time I tried it! Lemony notes and subtle tropical fruit elements coming out as it warms... so glad I got another can. Noticed the different art/design for the can and wondered if maybe it brought with it a change in recipe or some kind of refinement. Not 100% sure but feels that way to me so far!

Flavor is super clean pine with biscuity malt bringing up the backend, bolstered by superb undertones of mango, guava, and passion fruit alongside some hints of tangerine/tangelo and herbal grassiness. Man, this is drinking so great right now! I'm sure it being 11 days old has more than a little to do with it, but I am re-impressed by this brew! Had a few "meh" experiences with it over the years since, but this is giving me the feeling that they know exactly what they're doing and what may be necessary to bring this brew into the modern realm. Love that it doesn't seem like they gave in to trends and made it a hazy DIPA. It's just a superbly crafted, pine-y, citrusy, slightly-tropical IPA from New England, trends be damned!! Hoping to keep tracking this one down over time to see that they keep the quality intact...