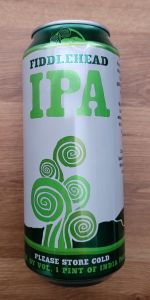 The nose has a multitude of fresh hop smells that are very impressive! First is an overwhelming dry earthy and husky stalk style aroma, freshly crushed up hop cones. If you've ever had the chance to pick fresh hops than you can identify with this wonderous smell. Lupalin and green leafy hops, peppery citrus with golden malted grains just sets it off!! Fresh and heady aromatics.

The fresh or "wet" hop cone flavor is very complex. Like the nose, the fresh lupilin taste steals the show, it's as if the hops were just picked. Dry earthy tones of wheat, malted grains and citrus based fruitiness are all most impressive. A mild, dry wheat and corn husks style taste pops out in the light malty effect as more citrus and stone fruit flavors pass through.

As the can eludes to enjoying at fun gatherings such as concerts, I can say the Fiddlehead IPA has been "that go-to" beer at many concerts for me in the New England area. One fine example was the Twiddle (Vermont based Jam Band) show at Stratton Mountain VT on 3/10/18 called the "snow globe show" Twiddle played outside in 13 degree cold while snowing! My Fiddlehead IpA actually became a slushy by the end of the night!! Good times.

One of my favorite beers. The citrusy aroma is followed by a bitter starting taste, that transitions into a citrusy burst of tropical flavors to balance the brew. It goes down easy and is great after a day of skiing or hiking in the Green Mountain State.

A= Hazy, yellow, the head appears foamy and off white, big bubbles that settle to ring around glass. Lacing rings the glass creating line for each sip.

S= Earthy, floral, some citrus rind and zest, a bit of dankness.

O= This beer has improved greatly over time, a very good and easy drinking IPA. Flavors are clean and refined but still got that hoppy dank IPA goodness.

Had one of these on tap at the brewery last summer & am just getting around to putting down my notes in here. A rather moderate & decent blend of citrus & pine with some astringent bitterness; to me this is a good IPA, but not more.

Unfiltered, cloudy look. Strong hops, not to much citrus.

This one seems to be overshadowed by Fiddlehead's DIPAs and all the other great hoppy beers in VT. It's a delightful single IPA with notes of citrus, mango, and fresh cut grass. It finishes dry and leaves me wanting more.

Always happy to see it on tap. Never fails to please.