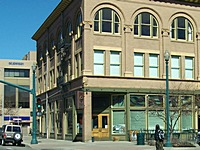 Great location downtown Colorado Springs. The service, quality/selection of beer and food was pretty good. I would recommend it and visit again if I am ever in the vicinity again.

V-Phantom Canyon is a large brewpub located in downtown Colorado Springs. It has a definite early 2000s "brewpub vibe" but there is not tacky crap on the walls and the space is actually kinda cool with mid-century touches to compliment the high ceilings and older wood. The space is big but there was a waitlist for tables and the 20-seat bar was nearly full when I visited on random Tuesday night. I heard it was graduation week crowds.

Q-I only had one full beer, an experimental pale ale; it was pretty terrible. The small taster I had of the another beer was more average quality. Will need to re-visit.

Ser-The staff was hustling to keep up with the crowd. They were friendly too. Beers were served promptly but in the dreaded shaker pint glass and with very little head. I asked a few questions about the beers, which were answered, but I did not want to keep the staff from serving other people.

Sel-Phantom Canyon had 18 beers on tap and one bottle (a 750 ml tripel) when I visited. The list covered all sorts of styles, including a sour, a few IPAs, and some more unique beers like a BA brown ale. No guest taps.

F-I had a turkey reuben with a side salad. Both were typical brewpub food, but well-executed with fresh ingredients. Do not expect haute cuisine here.

O-Phantom Canyon is an average brewpup. In a city with a ton of competition, that might hurt them, but in Colorado Springs, it might be worth a visit if you are in the area and need some grub and a pint.

A solid brewpub in the heart of Colorado Springs. Parking is limited, but if you're visiting and planning to walk around downtown for an hour or two, you can park right behind the building for $5.

It's a big place with a lot of tables, but it didn't feel too packed. Lively but tame.

The beer is above average for a small brewpub. The Alpenglow seemed to be the most popular on tap and was a solid hefeweizen. A B+ hefe imo, while many American brewers fail to execute the style. I had a flight of four other beers: Succubus, Box Car, Streamliner, and a Session IPA whose name is escaping me. Succubus was a little harsh and unbalanced, but I enjoyed the other 3, particularly the Session. The beer is accessible and straightforward.

The food was very good. The Bison Patty Melt was cooked perfectly and nicely seasoned. A member of my group got the fried chicken, and that looked delicious as well.

Overall, I'd probably be a regular if I lived here. The beer isn't exceptional, but the complete package is very good.

Marginal spot in town. they changed the menu to much and lost the quality.