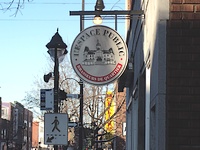 L'Espace Public is a charming brewpub not too far south of Le Bièrologue. It's a nice neighborhood and the walk between the two is quite pleasant in good weather if you'd like to pick uop some local beers in bottles as well.

They offer 8 house beers on tap plus several bottles and cans and at least 1 cider. I also have in my notes 12 different brands of Scotch although I'm not sure if that's still the case.

There's a nice area to sit outside when the weather is nice, and it's got a fairly basic "slick farmohouse" feel inside with a few funky twists (interesting contemporary art and bathrooms!). They can three of their beers, and I'm not sure what's up with the pigeon thing, but at least it's entertaining.

There's no food (as is usual) but the service is good and the beers are great.

It might not be amongst the top beer destinations in Montréal but I've enjoyed it and I'll certainly be back.

Hi,
L'espace public is a nice little bar with a good vibe. The crowd is nice the staff too, there is a good selection
of beer that they brewed right there, it's not pricey and it's good. There are music gig sometimes wich is fun.

L' Espace Public is a fairly new brewpub which opened in Jan. 2012, and it's a great addition to the excellent range of Montreal brewpubs. It's located on Rue Ontario East, some distance east of the Latin Quarter, and is easily reached by bus or bike. My friend and I visited twice during a four day biking/brewpub trip at the end of August. Like most Montreal brewpubs, L' Espace Public is small compared to it's American counterparts - basically a cool bar that brews it's own beer. It is long and narrow, with a medium size bar on one side and tables spaced comfortably throughout the rest of the room. Interesting and quirky art is displayed on the walls. Outside seating in front is popular during good weather.

The staff are very friendly and helpful and enjoy conversing when they aren't too busy. The beers are generally true to style and they avoid the temptation to brew overhopped, imperial versions of everything. They had nine of their own beers on our visit, including a very tasty English brown ale and one of the better saisons I've had in North America. We liked every beer we tried and made a point to return a second evening because we enjoyed the atmosphere as much as the beer.

L' Espace Public is well worth the effort of getting there. Just take an eastbound bus down Rue Ontario from the Latin Quarter. You could go there first and finish up at Chevel Blanc and L'Amère à Boire on the way back, or hit those two brewpubs first and end at L' Espace Public.

A brand new brewpub in Montreal. Opened last month. This one is in an area of town i don't go very often (almost never), Hochelaga-Maisonneuve.

A small pub made more on the long. As i enter, lighting is low a bit. Small window to the right of the front entrance has space for one table. Facing the back of the pub, the left wall is lined with those high table with the high bar chairs and the left has the bar with stools facing it. An assortment of tables and chairs fill the back. The washroom is downstairs and has a concrete wall with an open concept for the restroom.

They have 2 of their beers (brewed at Bilboquet) as well as guest taps from Barberie, Bilboquet, Charlevoix & Lac St-Jean. The pale ale was excellent and they have an IPA as well that i didn't get to try.

Was here when they opened and there was about a dozen or so that came in with curious onlookers from outside. I wish them well because they seem to be doing good so far.