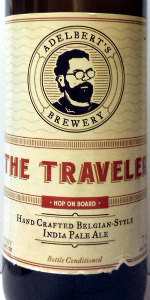 This deep golden ale possess an aromatic nose with floral and fruity notes. Its flavors are a blend of warm, soft biscuity malts followed by a complex, clean finish. With this ale, we aimed to create an easy drinking, one-of-a-kind IPA that leaves you wanting more.

Travelin’ Man is homage to Del’s lifetime of traveling. From Colombia to Kenya and everywhere in between, Del experienced the world in ways few others ever will, and we are forever grateful for his stories. We hope to inspire you to go out and make your own adventures.

View: More Beers | Place Reviews
Recent ratings and reviews. | Log in to view more ratings + sorting options.
4.13 by kflorence from Texas on May 16, 2021

Poured from a can into a pint glass

Appearance – The beer pours a lightly hazed orange color with a one finger head of white foam. The head fades fast leaving but a touch of foamy lace on the sides of the glass.

Smell – The aroma of the brew is light overall, consisting of a tangerine and orange smell mixed with a little bit of a bready aroma. There is a touch of a caramel and light herbal hop as well.

Taste – The taste begins with a big grapefruit hop flavor supported by a slightly drier caramel malt base. Upfront the grapefruit hop as a touch of sweetness to it, but after time the sweetness fades and the flavor gets more bitter and grapefruit rind like in nature. At the same time some other flavors of herbal and grassy hop comes to the tongue, with these tastes taking there flavor profile to its end, where one is left with a bitter grapefruit taste to linger on the tongue.

Mouthfeel – The body of the brew is average to slightly lighter with a carbonation level that is rather average. For the very bitter grapefruit hopped tastes the feel is nice and creates a refreshing and approachable medium for the flavor profile

Overall – A rather tasty, grapefruit forward IPA with a nice bite, but yet still very easy drinking. Rather tasty overall.

This is a very floral beer, almost jasmine like flavor. Decent sweetness, not a thick or cloying beer, it’s well rounded, but definitely floral over tropical as other reviews have stated.

Simply the best IPA I've ever had. It is just like grapefruit/orange juice. Mouth feel is like a juice. Loved it. Will buy repeatedly.

From draft into a snifter. Orange gold color. Thin white head , good lacing. Earthy smell. Taste of vanilla and herbs. Not a lot of depth on the taste, but a good beer.

A good strong IPA, with unusual malt flavors. I just expected a bit more variation from an IPA--for the Belgian flavors to stand out more. Its looks stood out with a deep carbonation and foamy head--poured from a basket-corked bomber into a tulip glass.

This is a great Belgian IPA. And it isn't limited and brewed once as beer advocate states. I have bought it several times already in the last couple months in Austin. In fact I just bought some a couple days ago Specs. If it's not brewed anymore they still have it on the shelves at several stores. It's worth it! It's a lighter taste that most American IPA's but it's a light fruity taste with a light piney taste as well. The good thing is it's not an IPA clone like all the others out there. Maybe because of the Belgian malt flavors.