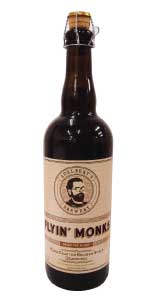 Notes: Conditioned on oak cubes used by Spirit of Texas Distillery to age their Pecan Street Rum, this ale has complex sweet oak, rum flavors with a warm alcoholic finish. Pair with dark chocolate desserts or bold cheeses.
The power of flight can be achieved through Zen-like focus and concentration. This ale will not help.
View: Beers | Place Reviews
Reviews: 25 | Ratings: 127 | Log in to view all ratings and sort
Reviews by kojevergas:

The name on the label is "Flyin' Monks" (NOT "Flying' Monk" as currently listed). See also: http://adelbertsbeer.com/our-beers/ Reviewed as a quadrupel because it identifies as such on the label. "Ale fermented with oak rum chips. Bottle conditioned." 9% ABV according to my bottle. Batch No 003. Bottled on 4/9/2013. "Serve at 55-70 degrees" into a snifter.

1 pint 9.4 fl oz brown glass bottle with standard Adelbert's label and hood-and-wire cap (aka cage) over a branded cork acquired at me local HEB Grocery and served into an Independence Brewing pilsner glass in me gaff in low altitude Austin, Texas. Reviewed live. Expectations are average; their dubbel was subpar and quadrupels are one of my top 3 styles so I'm suspicious.

Served cold - straight from me fridge - and allowed to warm during the course of consumption. Side-poured with standard vigor as no carbonation issues are anticipated.

A: No bubble show forms as I pour - nor should one in a beer of this style.

Pours a 1.5 finger wide head of light khaki colour. Poor creaminess and thickness; it's disappointingly thin. Not much frothiness either. No lacing at all as the head recedes. Head retention is average - about 2 minutes - which isn't bad for 9%. Overall, it's a pretty poor head compared to those of the best beers in the style.

Body colour is a nontransparent translucent dark auburn of below average vibrance but nice rich texture. No yeast particles are visible. It's not as dark as most (and as the best) beers in the style, but I'm optimistic.

Overall, it's generally appealing but not unique or special. There are no obvious flaws.

Sm: Has a rich rum character atypical of the style, yet intriguing. Sugarcane is abundant. I also get plums, dates, raisin, and caramel. No fig or prunes. Unfortunately, the rum character also lends it an unpleasant obvious booziness; it's not a hot aroma per se but the booze is distracting and unnecessary. I look for oak but don't find it. Belgian malts: pale, amber, biscuit, maybe brown. A dash of chocolate malt, maybe. A kiss of molasses. Has a bit of a dark fruit syrup note that I'm definitely not on board with.

Boozy rum is dominant to its detriment.

No yeast character or hop character is detectable, though I assume Belgian yeast was used.

This isn't the delicate dark fruit aroma of the best beers in the style, nor does its scent suggest particular subtlety, complexity, or nuance. But I'm intrigued by the rum notes and I'm looking forward to seeing how the flavour profile is.

A largely inoffensive aroma of moderate strength. More aggressive than the best quads.

T: Sugarcane/rum and accompanying booziness overwhelm the flavour profile, ruining any balance or delicacy and reducing drinkability. I don't get any oak either, so it seems the rum oak chip gimmick was a poor play. I do get a hint of pecan, which is interesting. Body is comprised of Belgian malts, including amber, biscuit, and a bit of the pale variety. Buried raisin. Sugarplum. Dates. Caramel. As aforementioned, the balance is poor - but it does have some cohesion, though it's definitely not gestalt. Has some complexity, but no subtlety, nuance, or delicacy. On the sweeter side. Quite a mess, but not a trainwreck. If we disregard style, it's a decent little beer - sort of a misguided strong ale. I like the pecan and the rum, I just wish it didn't have to be so boozy. And where's the oak?

No yeast character or hop character comes through.

Mf: Smooth and wet. It's got a full body and an obvious thickness, which isn't ideal for the style - the best quads are delicate and shockingly light. Okay presence on the palate. Boozy and unrefreshing. Texture suits the flavour profile only in a general sense; this is not custom-tailored to the taste.

Not oily, gushed, syrupy, or astringent.

Dr: The booziness does limit drinkability, and the quality isn't high enough to make me crave each sip. I applaud the experimentation with rum soaked oak chips, but this really misses the mark inasmuch as quads are concerned. Disregarding style, it's a passable but still disappointing beer. Adelbert's is not impressing me with their Belgians, especially these weak attempts at abbey beers. I wouldn't bother with it again, nor would I recommend it to friends or trade partners. Drinkability is below average, as is the beer. The booziness increases as it warms, making it more and more unpleasant.

Light aging (a year or two) might benefit it slightly, but I wouldn't waste the cellar space.

Bottled on 12/10/2013
Appearance:
Medium khaki colored head which fades away rather quickly, minimal head retention most likely due to its high alcohol content. Dark chocolate brown color body.
Nose:
Amazing! Chocolate, maple, sugary, caramel, toasted malt and nutty notes come through strong and weave in and out as well as come forth at different points during the pint.
Palate:
I was initially hit with a complex and distinguished array of flavors that burst forth. As you take a drink, the ABV lets you know it’s there, not by taste but by a delightful warming sensation that is welcomed as you sift through the flavors. I noted: Fruits, apricots, plums, roasted coffee and chicory. It has a huge full bodied mouthfeel and a slight bitter finish that turns into a rich sugary-sweetness that lingers for some time.
Overall:
I’m writing this on a cold, blustery night and I had opened this bottled after a long day of being outside in the cold. Once I popped the cork from this bottle I couldn’t be happier with my selection for the evening. This beer definitely needs to be tried and is easily the best quadruple I have ever had the good fortune to drink.

Well a truly a great example of a no frills Quad. All the classic boxes are checked for this: color, foam, aroma, taste, mouthfeel, and finish. Only mark against I would give is the booze comes through a smidge too much for my liking when I first sipped but did subside as it warmed thankfully. I would definitely get another if I could but am keeping one for a couple years to see what happens.

From the bottle into two New Belgium snifters with etchings.

S: Licorice, anise and mild clove. Not an overly boozy taste that I find typical of many quads.

T: Taste followed smell with licorice, anise and clove. The complexity of flavors seemed to deepen favorably along with a slight alcohol burn as the beer warmed.

M: Smooth and not too carbonated.

O: I bought the beer on advice from the resident beer expert in the local liquor store who is also a fan of quads. I was very impressed and look forward to a second bottle very soon.

Overall: Solid quad for sipping; big and satisfying, if not overly complex.

Burgundy brown with a one finger tan head that dissipated quickly, leaving wisps of foam.
Lovely notes of rum raisin on the nose and palate. Hints of bready boozy molasses and oak. Some dark chocolate as it warms.
Well carbonated. Smooth mouthfeel. Nice dry wine-like finish.
Not as bold and complex as I would like for the style, but quite tasty nonetheless.
Bottled on 11/13/2015. A sturdy beer. That's a good thing.