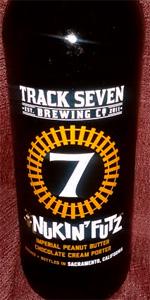 Has a light brown body forming into a medium brown shade with a 2 finger head receding to a very thin ring quickly. Peanut particulate floats around and on top, where there's an oily layer resting.

Aroma is of chocolate peanut clusters, straight up.

Nice body on this one, somewhere between medium and heavy. Good level of carbonation, a bit of roastiness as well. Minimal detectable alcohol.

Overall, a very tasty chocolate peanut butter porter that I'd gladly trade for more of.

L: Brown with slight hues of orange/yellow inside.
S: Strong peanut butter flavors with traces of chocolate.
T: A good fusion of peanut and chocolate. Peanut butter is the stronger one with a chocolate finish. NO after taste.
F: Very light for a porter.
O: Decent peanut butter chocolate beer that's not over the top.

Pours a strange light-medium brown. Aroma is very much peanut butter. Taste is thinned out chocolate and peanut butter. Feel is lightly carbonated. Overall, this would be a great beer..but it had that "watered -down" essence throughout.

Flavor is actually very mild. It's mostly peanuts with a little dark malt. Finish is dry and it seems like the flavor has dissipated. Bottled on 08/26/16, a surprising age for a beer from the supermarket.

This creamy porter is a little crisper than others of its ilk, with little stickiness in the back of the throat for such a dark dessert beer. The peanut butter is smooth and natural, and the chocolate is pleasantly dark.

Not a bad porter, I really enjoyed the soft peanut flavors. LOVED the milk chocolate base flavor of the whole offering. I've bought two or three of these in 22oz bottles. when I feel the knack for a porter over my usual stout, this is the pick. It's honestly a nice change of pace, a subtle peanut flavored porter with no smoke. I would love to try this on tap, and see the differences.

Smell: The peanut butter tones come through on the aromatics, with milk chocolate underneath

Taste: Milk chocolate and vanilla cream forward, with the sweetness building; through the middle, there is a nutty flavor but it never reaches the influence suggested in the aroma; the finish is rather sweet

Overall: I have tasted some very good efforts in the peanut butter porter sub-category but this is not one of them

Feel - this is a thick porter, almost chewy.

Perhaps a bad bottling. The pouring looked like a soda. There was initial fizz, with no head and zero lacing. Faint hint of peanut smell. Subtle chocolate and peanut taste. Feel was completely flat. There was absolutely no mouth feel, had no idea this was a beer. Everything about this experience was Diet Pepsi. Only my second ever drain pour.

On tap at Kuni Sama

A: Pours dark brown with a frothy khaki head that settles to a light layer and leaves a little nice lacing.

M: Towards the heavier end of medium body, moderate carbonation.

O: I've had this twice now, once out of a bottle and now once on tap. Neither time did the peanut butter really jump out at me. Not a bad beer but I don't think they hit their mark.

Appearance - Pours dark cola brown with a khaki colored 2-finger head. Fair retention before breaking down to a near barren surface, with just a small island of suds in the center and a thin ring around the edge of the glass. Lacing sheets at first, then turns spotty.

Smell - Peanut shell hits my nostrils first. Light notes of milk chocolate. Not much beyond that.

Taste - Follows the nose. Peanut that's more 'straight from the shell' and earthy than peanut butter. Chocolate notes are found throughout the experience, but don't ever quite hit with any kind of assertiveness. Extremely faint coffee roast that echoes in the finish.

Mouthfeel - Medium in body with moderate carbonation. Smooth, creamy texture that gives it a silky ease as it goes down. Probably the strong point of this brew.

Overall - Their goal was 'peanut butter cup', but I'm not really getting that. Not enough rich chocolate flavor and the peanut character has a more natural, earthen tone. It's a pretty good brew, but nothing that captures the imagination that's written on the bottle.

Really roasty black porter with hints of brown on the edges. You get hints of peanut butter on the nose. There is a bit of peanut on the front end that leads into the heavy roast. Well balanced and tasty.

Pours an almost opaque super dark orange-brown with a foamy khaki head that settles to wisps of film on top of the beer. Tiny dots of lace form around the glass on the drink down. Smell is of roasted malt, cocoa powder, peanut butter, and earth aromas. Taste is much the same with cocoa powder, roasted peanut, and earth flavors on the finish. There is a mild amount of roast bitterness on the palate with each sip. This beer has a good level of carbonation with a crisp mouthfeel. Overall, this is a good beer with a nice mix of cocoa and peanut butter aspects all around.

Black with a tan head. Shockingly the aroma is of milk chocolate and roasted peanuts! Who would've thought! Flavor is very creamy chocolate up front followed by a roasted peanut and salty finish. Not overly sweet.

Smooth chocolate with hints of peanut butter, some saltiness, and some roasted malt as well. Not very carbonated, but creamy mouthfeel is good. Doesnt show abv.

I didn't pick up much of a smell from the nice tan head that resulted from my pour; about an inch and a half in a large tulip. The mouthfeel, I believe, a very good representative of the style. Medium, I'd say.

A nice treat this evening. Yummy...