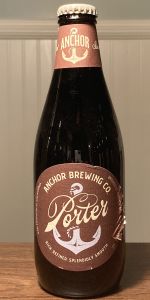 A blend of specially roasted pale, caramel, chocolate, and black malts, along with our top-fermenting yeast, creates complexity without bitterness. The brew is hopped at a high rate, and naturally carbonated. The result is dark in the glass, but surprisingly light on the palate.

Pours a black color with a hint of an amber hue, minimal tan head, did not notice any sediment, and too difficult to see any action.

A bready roasted malt aroma with lots of florals.

Very good session Porter, smooth, malty with florals, and has a sweetness throughout all the way to the aftertaste.

Anchor Porter, the latest on my ever-slowly-growing Christmas list of Anchor beers is (as will be the next beer I review) an anomaly - a blip stylistically - from a brewer better known for another beer type (in this case their patented “Steam Beer”). With the trepidation of a beer explorer going into the jungles of Porter from a brewer that is knowingly focused on another style, and armed with terribly conjured metaphors, I ventured forth... will I ever see my loved ones again? Perhaps I shall write them a letter.

Poured from a 355ml bottle into a nonic pint.

A: Dark, hazed cola body with a massive 1 inch tan head that slowly settles down to a centimetre, in the process confusing my American readers by mixing Imperial and metric measurements - bad beer! 8/10.

S: Unroasted coffee beans, chocolate and dark fruits give this Porter a touch of English Strong Ale, hint of molasses brings us back to the US of A. Further whiffs (and as is trademark to my reviews: taking too long in writing my thoughts and letting the beer warm considerably) releases a lot more molasses, to the point that you would think this beer was a Southern gentleman who enjoys repeating the word “molasses” with an added grunt ad nauseam. 8/10.

T: Flavour is molasses up front with dark fruits, some nuttiness (interesting) and earthy/herbal hop bitterness in the finish. Overall flavour is more like a Strong or Brown Ale than a Porter, and as such creates a distraction for a well-versed Stout drinker like myself. Where are the heavier/darker flavours of coffee/chocolate characters I wonder? Aftertaste is a bitter herbal note. Not a fan of this Porter. 6/10.

M: Watery, mid to light bodied with a wafer-thin carbonation... it is indeed lacking here over other Porters I’ve had. 5/10.

D: Don’t get me wrong, I do like a good English Strong Ale (I regularly keep Hook Norton’s Twelve Days in my fridge) but this Porter is so far off style it’s difficult to recommend it over other Porters like: Founders, Harviestoun, Samuel Smith’s or Fuller’s London Porter... I can easily keep naming decent Porters et al. - all of which have the classic Porter flavour profile that I know and love, trust me on this reader - I know a good Porter when I taste one, I have the same ability with Dalmatians (knowing them when tasting them). 6/10.

Food match: The overt (unroasted!) maltiness of this brew would suit game bird.

One of my favorite brews.. started my craft brewery obsession.

Pours a dark black with ruby highlights around the edge of the glass with a big tan frothy head that retains through the whole beverage and laces the glass. Smells of sweet malts, alcohol, and just brewed coffee notes. Very rich earthy and smooth coffee notes in the taste of the brew. Feels like liquid silk going into the mouth.
Could drink one of these right when I wake up in the morning ;) Def. my favorite beer from my favorite style at the moment. Recommend ++.

Bottle. 52d. Smell is malt with a little caramel-like aroma. Taste is on the clean and lighter side. Some slight bitterness that is well balanced. Overall a very versatile porter and very drinkable under many conditions. I liked it a lot and this would be a solid choice if Black Butte was unavailable.

God! This is awful. I used to love Anchor Porter with its subtle, slightly sweet flavor. But it's changed. Picked up my first six-pack of Anchor Porter in about three years; what happened?! What used to be a nice, sweet porter has turned into a bottle of liquid smoke. Maybe my six was bottled during one of those well-known California brush fires, but I doubt it. Shame on you Anchor for changing one of the best Porters into something that tastes like a charcoal briquette. Now I'm stuck with the other five!!!

A wonderful porter that tastes and feels more like an English style ale than modern American variants. Anchor porter is malt-forward and incredibly smooth and rich. A porter that you can have two or three of after a hard days work.

I've tried countless porters. I keep coming back to Anchor and compare all other porters to it. I think this is a perfect beer IMO. My local beer store keeps it stocked for me.

I compare it to Guinness Extra Stout, but better.

Dark ruby-brown-black, tan rocky creamy head, spots of lace. Fantastic aromas of sweet cream, roasted barley, milk chocolate, and a bit of umami soy sauce. Taste is wonderful: roast that gives off a bit of bitterness which is aided by mild hop resins, chocolate, stone, and faint sweetness. Everything is deep, and it has a good long finish. Creamy, smooth mouthfeel, medium-full body.
I'm gonna say it and I don't care who knows: I love this beer. Fantastic balance of all the flavors, which were rich and satisfying. Inviting from the initial glance, delicious through the smell and taste and feel, and satisfying on the long rich finish. My new favorite porter.

Damn, this a one smooth drinkin' porter here. Pours out to the color of coffee with a medium brown head. Helluva start. Odors of coffee and hops were present, with an earthy overtone masking the alcohol. Very nice mouthfeel, quite smooth and thick, and a touch on the creamy side. Flavors of coffee bean, earth, chocolate and mild spice were present, along with a bitterness on the finish. This is a good porter. Recommended.

Appearance--nice and black with a 3/4 inch light tan head.

Smell--Smokey, maybe a hint of chocolate

Taste--Rich, robust--but not overpowering. This is a damn good beer.

Mouthfeel--thick, without being heavy. Good carbonation

Drinkability--Maybe a bit heavy after a couple of them, but I'd expect that from a porter.

Pours super dark brown. A tan head stays and coats the glass. Smell is coffee-like malts, a bit of booze as well. Taste is sweeter than the smell, some anise and dark fig taste as well as some dark cacao. Good taste. Feel is a bit "hot" for a porter, imo. A good drinker, not superlative of the style, imo, but very good.

A- Pours a very deep brown to black color. Big, 3 finger head with a slightly violent pour. Tan to chocolate brown head that retains and laces very well. Body is opaque and dark.

S- Dark malts with a slight sweetness in the scent. Slight acidic, soy sauce like flavor on the nose. Some good, lighter chocolate malt notes.

T- Just like the scent. Starts with semisweet chocolate malts and a hint of darker stuff before moving quickly into a muddled soy sauce-like flavor. The flavor tastes somewhat like oxidation, but also reminds me of a bock, with a dark fruit flavor component. Ends with a lingering dark fruit flavor.

M- Light, yet smooth across the tongue. Lower on the carbonation scale. Easy drinking, and reminds me of a German lager as far as feel goes.

Overall, another very solid offering from Anchor. Classic look in the unique;y shaped bottle. Smooth and easy drinking, this is a great everyday choice for a porter.

The smell is good, lots of roasted malt & subtle smoke under tones. Alcohol is clearly present.

Very smooth taste. Roasted malt and more hops than I expected. Some more smoke flavor also comes through. Tends towards slight sourness as the beer warms, and this is the only (minor) flaw. Carbonation seems perfect for style. Goes great with chocolate peanut butter cookies!!

Beer has a nice feel and has high drinkablity. I would have no problem recommending this beer!

Anchor Porter from Anchor Brewing Company
Beer rating: 92 out of 100 with 3825 ratings