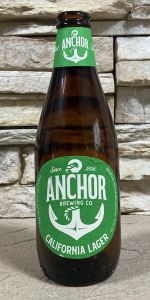 Notes: In 1876, thanks to an ice pond in the mountains and a belief that anything is possible in the Golden State, a little brewery named Boca created California's first genuine lager. Anchor California Lager® is our re-creation of this historic beer. Made in San Francisco with two-row California barley, Cluster hops (the premier hop in 19th-century California), and our own lager yeast, this all-malt brew is kräusened and lagered in our cellars. Its golden color, distinctive aroma, creamy head, balanced depth of flavor, and smooth finish make Anchor California Lager® a delicious celebration of California’s unique brewing heritage.
View: More Beers
Recent ratings and reviews. | Log in to view more ratings + sorting options.
4 by Beecham from California on Apr 09, 2022
3.63 by QuintusHorace from California on Mar 17, 2022
3.83 by Hophazzard from California on Feb 14, 2022
3.9 by TLA from Pennsylvania on Dec 25, 2021

I'm not sure how I never reviewed this back in the day, but I'm not gonna bother with a proper review now. It's a unique lager, but not too different from their steam, and it's too dry and with that signature Anchor "sawdust" character for me to really wanna drink it again.

Overall: Any easy drinker with a nice balance of malt body and crisp hops.

This is the exception.

I first tried these California Lagers years ago and fell in love immediately. (I'm not a big fan of beers with a bitter hop approach. I'll drink them, but it's a "once in a great while" thing for me.) Finding a beer with a malty approach from Anchor was an eye opening moment.

This beer pours gold. I mean LITERALLY golden. Nice head for a lager, it disappeared rather fast, though. Not much visible carbonation, some, but not much. Smell is a nice mix of malt and (VERY LIGHT) fruity hops. Taste is a strong malt with slight bitter bite. (Less than a lime in a Corona.) Wonderful fullbodied flavor, nice amount of carbonation.

Overall my FAVORITE beer for the summer. You name it, it's good for it!!! From bbqs to reunions. Everyone seems to like this West coast lager!

This is a really well made beer with good balance between hops and malt. It's clean with good mouth feel. Bitterness is not a clean as I would like but it's a characteristic of the Cluster hop. It's easy to drink. It tastes like beer.

I don’t want to come in here all bombastic like Lebron after winning a title (I’m a Kobe guy), because this isn’t a bombastic beer. It’s just there, chilling like a good hound dog after eating his supper. And while drinking this thing, that’s all I want to do: chill.

Be at ease, my children.

Delicious balanced taste that is crisp and has a dark caramel smell and taste. It is not heavily carbonated but it does have a thick feel on the tongue. A beer that I have bought on more than two occasions.

This is the only the second beer I have ever had that has bragged in the description of the "krausening" process. The other, of course, is Old Style. Absolute clarity in the body, mild barley in the nose. This has a precise amount of carbonation and goes down quite nicely. Flavor is basic but limited. The aftertaste seems watery, if that is possible. Not awful, just not a lot of flavor.

Appearance:
Harvest gold and crystal clear. Sprouts a slender cap of white which makes it known early that it doesn’t intend to stay long.

Bouquet:
Dried corn husk, canned corn, basically a shitload of corn with some fermented grains behind it. If that sounds bad, it's because you have self-respect.

Feel:
So light and sessionable you could almost mistake it for water, except that its rife with enough carbonation to make an unopened seltzer feel insecure.

Taste:
My first mistake was paying too close attention to the palate. My second mistake was continuing to drink it. Those corn husks from earlier are a little charred now but they take a backseat to the grain; which comes forward like a some horrid bog monster. Repulsive, unseemly, and festooned with unsavory swamp grime.

Overall:
Another disappointment from Anchor Brewing Co… which is astonishing, considering they brew the best porter on Earth. Drain pour.

12 oz bottle with a 29 April 2020 bottling date stamp on the label, served in a lager glass.
Look. Exactly as expected for style, or just a shade darker, with a clear amber body and a semi-durable white head. Decent lacing.
Crisp, clean aroma and flavor. Very harmonious with a fine, mildly bitter aftertaste.
Crisp, semi-dry, medium body.
Overall. Excellent example of the style that reminds me of drinking fresh lagers in the Czech Republic.

This is a very underrated beer, not too much well known about it, but if you are looking for a great tasting lager, go for this one.

Picked this up because I was in a lager mood. It looks a bit orange tinted when poured. Maybe because I had it after a Belgian dubbel, it felt quite thin. Overall it made for a pleasant though a bit unremarkable experience.

Crystal clear golden color, with quickly dissipating quarter finger white head. Aroma is of touch of floral hops and hint of pale malt. Taste starts with soft floral notes, wiff of lemon zest, that fades into a soft and lighter bread. Ends crips. Body is light. Overall a nice lager, not gonna blow your socks off, but easy drinking and well balanced though arguably more subtle than some other famous lagers.

Part of an Anchor Variety Pack. Pours clear, copper tint, with light creamy head and some lace. Nice bready aroma, with some floral hop. Taste is bread and hops with a dry finish. Feel is light, mild carbonation. Pretty good brew, but not great.

Taste is toast with the barest dab of orange marmalade, a hint of toffee & caramel as it warms, faint dried apple+pear, and light spicy/floral hop flavor. Mild bitterness that lends to a slighlty drying finish .

Overall, enjoyable and would have it again.