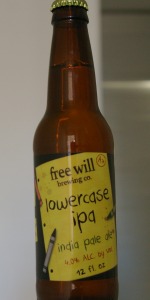 Here is another beer that I purchased at The Friendly Greek Bottle Shop, brought home, and realized that no picture existed. It would not be so bad except that pic approval seems to have slowed to a crawl on this site. Boo hoo. I dedicate this one to e. e. cummings since he eschewed Upper Case altogether.

From the bottle: “little ale big hops” and an “A+” in the use of crayons.

i pop!ped the cap and began the pour, in as aggressive a manner as possible, watching as the pseudo-cascade took place, forming a massive four-plus fingers of puffy, rocky, bone-white head with good retention. it was time to sit back and wait for it to fall before continuing, so i began to take note of its pale-straw color (SRM = 1 – 2) with NE-plus quality clarity, enabling me to see into the future. i am going to a pink floyd mass this afternoon at 5 pm, followed by back in black, an ac/dc tribute band tonight. the nose had a definite grapefruit odor and my mouth began to water. mouthfeel was thin-to-medium. the taste was very citrusy and it was one of those instances in this pseudo-style that the taste lived up to the nose. i do not mean to buck a trend since so many (or at least enough) people like these sessionable ipas to make them worth brewing, but i just feel unfulfilled afterwards. in this instance, the flavor was plenty hoppy and i was satiated in that regard, but at the same time, i just felt like it lacked something. probably alcohol! whoops. finish was dry, bitter from its hops, tasty, but overall unfulfilling. now i am ready for a beer!

This beer sounds like soda when pouring. Vibrant carbonation making a lot of noise. Beer seems kind of citrus themed with a strong grassy and earthy thing going on. Kind of a bready thing going on as well. Mild roasted tone also; just barely. A decent session IPA. I could deal with less of the earthy and more of the citrus. I seem to enjoy it more as it warms up. This is a pretty decent session IPA. I could probably go for more than one of these.

Tasted at the brewery during a tour of the brewery.
Body was very light colored yellow with a bright white head.
Light aromas of some pine, grass and some cardboard.
Taste is very light, small amount of pine shows through with very little else.
Not much carbonation or mouth filling flavors. Kind of what was expected from a sessionable beer.
Overall a kind of what was expected from this beer since it was brewed as a light /sessionable IPA. Not really a favorite style: sessionable or light beers. However, if you are looking for a light bodied IPA that has a low abv perhaps this is the beer for you, just not something I would want again.

When fresh, this is an excellent session IPA. I'm surprised at the low rating on this beer, considering I think it is about as good as Lagunitas Daytime, side by side.

I like this beer with its traditional mouthfeel and nice, tropical, grassy flavor.

There is some nice lemon, grass, mango, and pineapple on the nose. The flavor is light, but smooth and extremely hop forward.

At 4% ABV, I'm surprised at how good this beer is. Get it fresh, because the hops will fall off fast. The way I'm drinking it now, it's no worse than any of the top session IPAs.

My only complaint is that it isn't the prettiest beer - too light in color. More code colored than beer colored.